Nearly gone are the days of lawyers sprinting to the courthouse to beat the clock, desperately trying to file a document before the doors are locked. The sight of legal assistants dashing in and out of attorneys’ offices in search of one piece of paper also is a thing of the past. And clerks once dedicated solely to processing paper filings are now putting their services to use elsewhere.

The advent of electronic filing has changed the way Hoosier attorneys do business. Tasks that once required lawyers and their staffs to sift through Bankers Boxes and drive to courthouses can now be completed with just a few keystrokes. As of the end of 2018, 85 of Indiana’s 92 counties had implemented voluntary e-filing, with many of those counties now requiring attorneys to file at least some documents electronically.

Judicial leaders heading up the e-filing initiative expect that every Indiana county will have switched to e-filing by the end of 2019, and all counties likely will be using the Odyssey online case management system by 2022 at the latest. Though that timeline puts the judiciary slightly behind the Supreme Court’s e-filing implementation schedule, court technology leaders say they are pleased with the progress that has been made.

When the Indiana Supreme Court began the e-filing rollout in 2015, it announced a goal of implementing the electronic system in all 92 counties by the end of 2018. The state is running about a year behind schedule, but Mathias and Mary DePrez, the Supreme Court’s counsel and director of trial court technology, said there’s a “very pleasant reason” for the delay.

“What happened was many clerks and judges weren’t on Odyssey and they wanted to be,” DePrez said. “… We thought it would be easier for all court and clerk users not to have to learn two systems in a short period of time.”

As a result, courts in seven counties — Wayne, Putnam, Miami, Howard, Clinton, Pike and Sullivan — scheduled their e-filing go-live dates in 2019. Of those counties, only Pike and Sullivan have yet to deploy Odyssey, but DePrez said the two counties are scheduled to move to Odyssey this year, and e-filing will follow.

Though e-filing is widespread across the state, there are still 24 counties that use case management systems other than Odyssey, specifically JTS and Quest. Of those counties, 10 are planning to move to Odyssey this year, as are a handful of city and town courts in Lake County. DePrez said she is working with the remaining counties to schedule Odyssey implementation in 2020 or 2021.

Among the counties where e-filing is currently being used, Mathias said there are about 31,000 registered users and about 125,000 new filings weekly. Those who perhaps have been the most impacted by the switch are those who typically do the actual filing — paralegals, legal assistants and clerks.

The Supreme Court offered specific praise for court clerks’ offices, where much of the e-filing training and transitional work has been done. Former Tippecanoe County clerk Christa Coffey joked that in the nearly two years her county has been using e-filing, she felt like she had become the resident e-filing technical expert.

Before Tippecanoe County moved to e-filing in March 2017, Coffey said it was not uncommon for her office to receive boxes full of documents that had to be filed just for one case. But now, clerks can process a multi-page court filing simply by logging into the system and accepting the filing from the screen.

That change has saved both time and money, Coffey said. In 2016 – the last full year of paper filing in Tippecanoe County – the clerk’s office spent $5,000 on file folders alone, Coffey said. But with e-filing, that money was reallocated to technology upgrades.

The biggest hurdle in the e-filing transition was the process of learning how to map documents within the system so that they are filed to the correct place, Coffey said. The Supreme Court sent staff out to train the clerks, and Coffey herself regularly sent out tips to help the staff and judges make the switch.

“It was a lot of trial and error, but fortunately for us we weren’t the first, so we learned a lot of lessons from talking to counties that converted before us,” Coffey said. 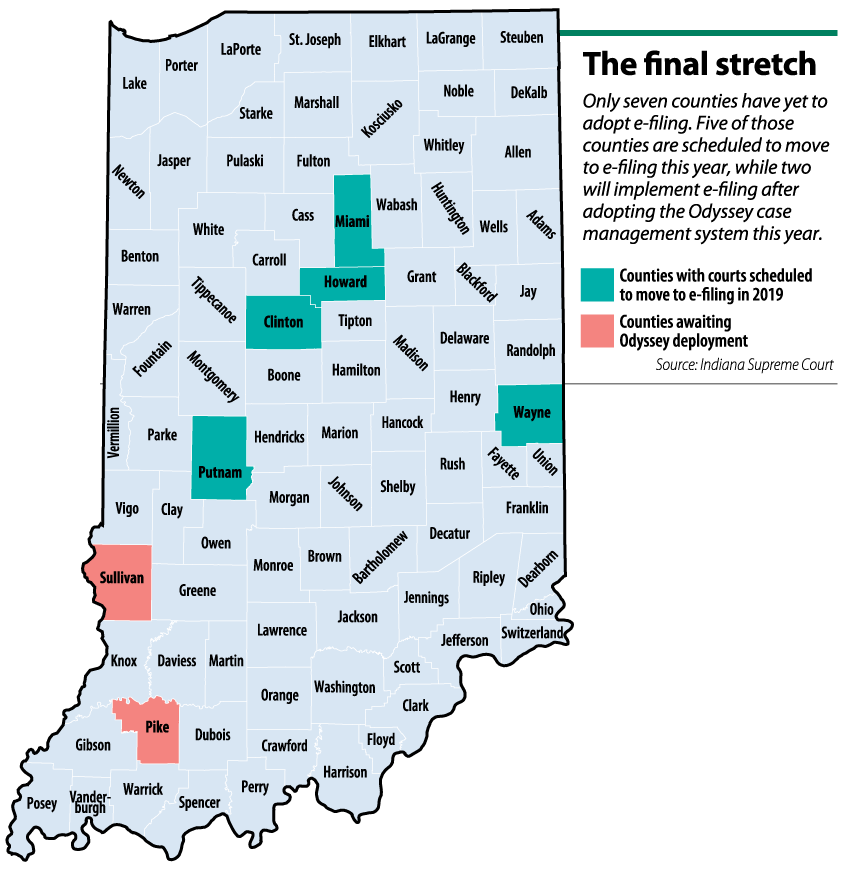 In Hamilton County — which had the perhaps dubious distinction of being the first to convert to e-filing in 2015 — Superior Judge William Hughes remembers the transition as less than smooth. The computer system wasn’t completely prepared for the onslaught of documents, and court officers and employees struggled to keep track of both their paper and digital files during the first few weeks.

But once the kinks were worked out, Hughes said the benefits of an electronic system began to make themselves known. He no longer had to worry about losing files or tracking them down in one of a dozen possible locations. That has meant the county no longer has a dedicated file clerk, but instead reassigned that employee to other necessary services.

In Marion County, Superior Judge Tim Oakes likewise said some court staffers have been reassigned because of e-filing, while other positions were eliminated through attrition. For Oakes, the benefit of e-filing is the ability to more easily locate specific documents in complex court filings.

But both Oakes and Hughes say there is a flipside to having thousands of documents available at their fingertips — simple tasks such as signing an order now take longer than they did before e-filing. That’s because the electronic system requires judges to log in and wait for the screen to load before they can sign. The process was shorter in the paper era, the judges said, when all they had to do was grab a pen and sign their name.

Mathias acknowledged that transitioning from paper to electronic filing has been an “extraordinary jump” for clerks and judges, but he said the fuel behind that jump is making the “great service” of e-filing available to attorneys.

“The attorneys statewide continue to tell us it has made a huge difference in their practices for the better,” Mathias said. “I’ve had many small practitioners tell me that it has kept them afloat to be able to e-file instead of having to run everything down to the courthouse.”

Even in larger firms, attorneys say electronic filing has made litigation easier on them and their clients. For example, Ice Miller partner George Gasper said he appreciates the ability to immediately see documents an opposing party files on a Friday afternoon rather than having to wait until Monday. Gasper also said e-filing is beneficial in emergency litigation because it gives litigants instant notice of court rulings.

Taft Stettinius & Hollister LLP partner Steve Shockley said he sees the benefits of e-filing in the reduced amount of paper he uses in his practice. He gave the example of a summary judgment motion that needed to be served on multiple parties. With paper filing, Shockley said he would have had to send a copy of the motion to each party, using up a lot of paper. But with e-filing, parties can be served instantly without printing a single document.

As with all technological advances, there have been some e-filing hiccups throughout the rollout. Occasionally the system will go down, though Mathias noted it is up 95 to 99 percent of the time.

There are also some minor inconveniences, such as the fact that attorneys representing one party in a single case will receive notices for each party they represent. For Shockley, that has meant receiving multiple emails with the same notice all at once.

As the rollout continues, Mathias and DePrez said they are actively looking into ways to make the process smoother for all e-filing users. But Mathias also offered praise for DePrez’s office, saying it has made several technological upgrades in recent years that have brought Indiana’s courts into he 21st century.

“It’s more than just Odyssey and e-filing,” he said. “It’s important that folks recognize the terrific holistic system that is being built.”•