Since the beginning of December 2018, the Indiana Attorney General’s Office has maintained a steady drumbeat of multistate settlement announcements, heralding seven that have brought about $17 million in restitution to the Hoosier State.

States collaborating to reach multi-million-dollar settlements with companies over allegations of misdeeds are nothing new. Attorneys general have responded to consumer complaints or bad business behavior by launching investigations and bringing about agreements that can change business practices through the sting of financial penalty.

Indiana’s attorneys general have long participated in and even led some of the settlement work, but statutory language quietly slipped into the biennial budget during the 2017 legislative session has changed where the state’s portion of the money goes. And Indiana Attorney General Curtis Hill’s office says the switch has curtailed the investigations it can now pursue.

“The agency settlement fund now impacts the timing, evaluation, filing and potential settlement of litigation,” Hill stated in an email. “The statute places unworkable limits on our ability to fully and fairly negotiate settlements on behalf of Hoosiers.”

Retired state Sen. Luke Kenley, who drafted the language that created the agency settlement fund, maintained the change aligned with the Indiana Constitution. The state’s founding document mandates that all expenditures be approved and appropriated by the Legislature, the former senator said. Now, when a settlement check arrives, instead of remaining with the state’s top lawyer as it did in the past, it is directed to the fund, which is controlled by the General Assembly.

Indiana’s previous attorneys general Steve Carter and Greg Zoeller had always conferred with Statehouse leadership and the governor on how they wanted to spend the settlement money. But looking at the growing list of lawsuits being undertaken by attorneys general around the country, Kenley saw more and more money being accrued and the need to amend the state code.

“They had all kinds of money,” the retired senator said of the attorney general’s office, “but it really belonged to the state as a whole under the constitution.”

‘Tired of waiting for Congress’

As Indiana attorney general from 2008 to 2016 and serving as chief deputy in the office since 2001, Zoeller is a big advocate for multistate actions that lead to these settlements. Largely the money that resulted from the agreements was put into the attorney general’s Consumer Protection Fund, which Zoeller estimated under his tenure bloomed to about $20 million.

The funds were then used for projects and initiatives that helped Indiana consumers, Zoeller said. Some of the dollars were spent on buying and distributing naloxone to law enforcement as the opioid epidemic worsened, and other dollars went to education programs designed to prevent Hoosiers from being scammed by online schemes. A $6 million appropriation from a multistate settlement related to the foreclosure crisis was used to bolster the state’s Low Income Home Energy Assistance Program.

Also, during the Great Recession, Zoeller dipped into the settlement money rather than going to the General Assembly and asking for an augmentation of the office’s budget.

“Absolutely,” Zoeller said when asked if the settlements were worth the time and effort put into obtaining them. During his time in office, he said, attorneys general were investigating and pursuing agreements, in part, because “we just got tired of waiting for Congress to act.”

Not only can the agreements involve “eye-popping amounts” — such as a $16.7 billion settlement reached with Bank of America in 2014 — but, the professor said, they usually include some type of injunctive relief. Companies will be required to alter their business practices or risk getting hauled back into court with the states asking the judge for stronger settlement terms.

The hits from the settlements ripple beyond the targeted companies and establish what Nolette called “business precedent.” Other businesses see what happens and change their own behaviors to avoid attracting the attention of the attorneys general, he said.

In Washington, D.C., certainly the work of the states’ top lawyers can set the tone, but overall results are more mixed. The settlements, Nolette said, do play a major role in influencing Congress to examine certain issues and putting things on the national agenda.

Yet, Nolette continued, there are limits on what litigation can do. Some problems such as climate change, public health matters and widespread consumer fraud require a comprehensive solution which is better handled on Capitol Hill. 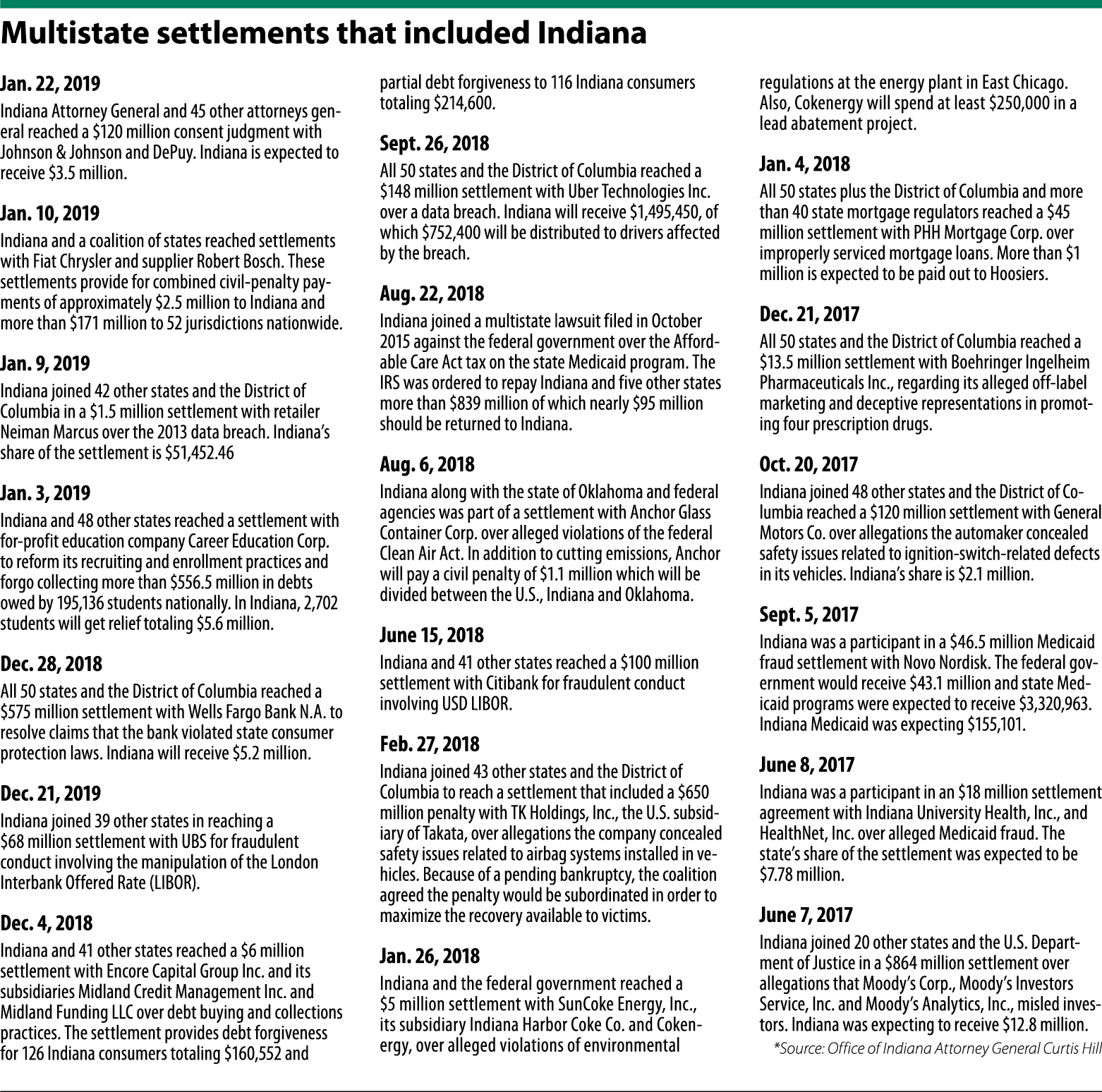 The Indiana Attorney General’s Office can take various roles in these settlements. Sometimes the state will accept an invitation to join, while other times the state will be part of the executive committee leading the litigation or even launch the investigation itself.

Often the spark that starts the investigation is consumer complaints. From November 2017 through November 2018, the AG’s consumer hotline received 26,905 calls.

Many of the complaints land in mediation, according to Betsy DeNardi, director and chief counsel for the Consumer Protection Division in the Indiana Attorney General’s Office. However, if a number of similar complaints are received at the same time or allegations of deceptive acts arise, the matter will be sent to an attorney in the division to determine if the state should investigate.

To access the money from the settlements, the Attorney General’s Office now has to ask the Legislature.

“The Agency Settlement Fund was never introduced during the terms of the previous attorneys general and was filed less than 30 days after I took office,” stated Hill, who took office in 2017. He noted his office offered alternatives and pointed out that under Indiana Code section 23-19-6-1(f), the Indiana Secretary of State can keep a portion of its judgments and settlements. “We suggested parity with this statute and were treated differently for no discernable reason.”

Kenley, who chaired the Senate Appropriations Committee, said he was not trying to undermine Hill. Rather, by the time Hill became attorney general, the consumer fund had reached roughly $20 million, and more multistate settlements were in the pipeline.

The senator first introduced the agency settlement fund in the 2017 session through Senate Bill 544. Although it passed the upper chamber with little opposition, the measure had become a “hot potato,” Kenley said, when it arrived in the House of Representatives.

Hill had been lobbying House members, and many were unsure what to believe, Kenley said. So, the senator reached out to Rep. Greg Steuerwald, who was chairing the Judiciary Committee where SB 544 had been assigned, and told the Avon Republican to let the bill die.

Steuerwald did not respond to a request for comment.

Then, Kenley said, he went to Rep. Tim Brown, chair of the House Ways and Means Committee and author of the state’s biennial budget. With Brown in agreement, the language from SB 544 was inserted into Sections 37, 38 and 39 of the budget.

“I said to Curtis, ‘If you expend the effort and energy out of your office to get these things done and for the benefit of consumers, believe me, you’re going to get the benefit of reimbursement for expenditures on setting up programs,’” Kenley said.•