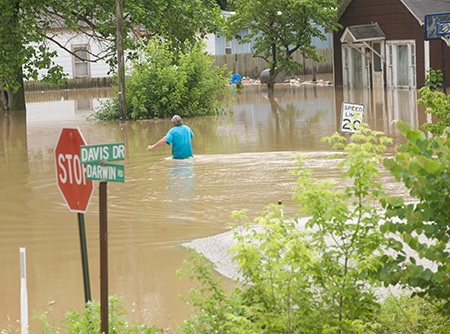 Stepping outside just a few weeks ago when Indiana was gripped by the Polar Vortex that brought subzero wind chills and dire warnings about frostbite, it could be difficult to believe the overall temperature of the planet has been warming to what many say are alarming levels.

But climate change is evident in rising sea levels, massive wildfires, severe storms and extended droughts. A 2018 report by the Purdue Climate Change Research Center reviewed historical weather data, some going back more than 100 years, and found that Indiana has seen — and will probably continue to see — rising temperatures and increased precipitation.

The Purdue Center explained some of the consequences of these trends in vivid terms.

“By late this century, people in northern Indiana will run their furnaces only as much as people in southern Indiana did historically,” the report, “Indiana’s Past & Future Climate: A Report from the Indiana Climate Change Impacts Assessment,” stated. “At the same time, though, these northern Hoosiers are expected to run their air conditioners far more often than those in the south did historically.”

Powerful tornadoes, floods, hurricanes and wildfires linked to changes in the climate can devastate property. Homes can be heavily damaged or destroyed by dramatic weather events, leaving families not only without a place to live, but also coping with trauma, loss and the stress of rebuilding.

Indiana is having more headaches with water, as evidenced by multiple severe floods in recent years. Since 1959, Indiana’s precipitation has increased to 1.33 additional inches per decade, according to the Purdue report. If the trend continues, by the mid-century, Hoosiers will see about 6 percent to 8 percent more rainfall than the state averaged from 1971 to 2000.

And that could leave many Hoosiers, like the residents of California and other coastal states, scrambling for adequate insurance. At those times, homeowners will likely review their insurance policy and file a claim.

United Policyholders executive director Amy Bach has seen insurance companies getting stricter and customers getting angry. As a result, Bach said she believes more people are suing their insurance providers than in the past.

“To us out there on the ground, it feels like the claims process is much more complicated than it needs to be,” Bach said.

Climate change is causing insurance companies to more carefully examine the properties they are asked to insure and to alter the language in the policies. Previously, Bach said, carriers would look at addresses, gather some basic information, then provide a quote for coverage. Now, they are using drones and developing different models to analyze risk.

Also, policies are being written with high deductibles and more exclusions, particularly for water damage. “Unfortunately, most of the trend has been going in the direction of more complicated language and more confusing language,” Bach said. “That is where underwriting is going.”

In California, where United Policyholders is based, the horrific wildfires have scared a few insurance companies from the marketplace. Bach said some homeowners are getting notifications when the time comes to renew their policy that the carrier will no longer be offering coverage in their geographic area.

The same is happening on the Gulf Coast, where Bach said the seemingly regular arrival of strong hurricanes are causing insurers to either pull out of the market altogether or price policies so high people that can’t afford them.

Both State Farm and Allstate declined to answer questions about how they are monitoring climate change and what changes to policies or practices they have made or are thinking about making. Nationwide did not respond to a request for comment.

Allstate did, however, offer its 2017 sustainability report, which provides an overview of the company’s response to the impacts of severe weather and the rising occurrence of natural catastrophes. Part of its approach entails being selective about homeowner underwriting in certain coastal areas, along with being selective about deductibles and exclusions. In addition, the insurer has been strengthening its catastrophe response and helping customers decrease their carbon footprint by offering incentives to replace covered or damaged items with more energy efficient ones.

According to Lynne McChristian, senior instructor of finance at the University of Illinois and spokesman for the Insurance Information Institute, insurance companies are paying attention to changes in weather patterns because that partly impacts how they price their policies. But climate is not the only factor being considered in premium decisions. Rising prices on raw materials plus new tariffs are increasing the cost of repairing or replacing damaged homes.

“If natural disasters are increasing, that’s one thing,” she said. “But we can’t overlook, also, what has happened to the cost to rebuild. That dynamic is part of the math.”

Carriers are trying to mitigate the devastation by working to make consumers more aware of the risks of owning homes in certain areas of the country and to push regulators to enact stronger building codes, McChristian said. People are not “naturally risk aware,” and they build wherever they want, even in vulnerable areas.

“Some people take a personal risk without thinking about what could happen,” she said, “and they are unprepared financially and emotionally for what does happen.”

Daniel Veroff, an attorney with the Merlin Law Group in San Francisco and a member of the American Bar Association’s Disaster Legal Services program, has noticed more unpredictability in the insurance market in California.

Buffeted by wildfires, Veroff, like Bach, has seen insurance become unavailable in some areas and unaffordably priced in others. A few policies are coming with premium services that will dispatch workers to water down the lawn and the house when the flames come near the policyholder’s home.

While some homeowners are having to get insurance from the less-regulated “surplus market” in the Golden State, many, Veroff said, are shouldering more of the burden from their insurance companies. When policies are renewed, provisions may not only have been altered, but also may not be fully understood by the homeowner. Moreover, he sees little effort on the carrier’s part to explain the change.

New Orleans attorney Casey DeReus of Pandit Law agreed insurance policies are complex and may contain nuances that property owners do not always comprehend. Especially after a natural disaster, policyholders are at a “very raw and emotional time,” and do not understand hurdles they face to get their houses rebuilt.

DeReus is a member of the ABA’s Disaster Legal Services team and focuses part of her practice on flood insurance cases. She noted that when policyholders are not paid the amount they believe is due, they will sue their carrier in court. The courts will apply the law and interpret any ambiguous language, she said, but will not change the terms of the policy.

The nuances in the policies will likely not be something the courts adjust even though homeowners could be left without coverage at the time they most need it. As an example, DeReus pointed to flood insurance, which defines a flood as a temporary condition. But the climate-change-induced rising sea levels are not temporary, so policyholders who suffer losses because the waters in the Gulf are creeping onto the shore will not be covered.

“A lot of insurance companies are stepping away from climate change perils like fires and floods because it’s not making them money,” DeReus said. “Consequently, people are going without the insurance they need in a disaster because of climate change.”•