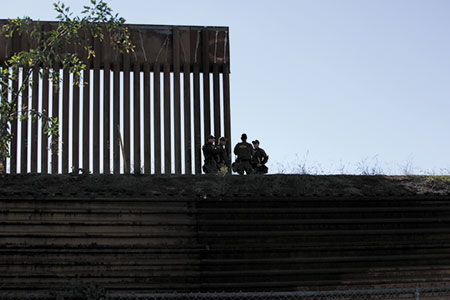 After weeks of speculation, days of negotiation, hours of press conferences and a government shutdown that lasted more than a month, President Donald Trump declared a national emergency Feb. 15 to fund the construction of a wall along the U.S.-Mexico border. The president declared the emergency pursuant to sections 201 and 301 of the National Emergencies Act after a Democrat-led House of Representatives refused to fund the border wall through a spending bill.

But the fight over the border wall won’t end now that an emergency declaration is in place — in fact, the real fight is just beginning. Numerous advocacy groups and state leaders have filed lawsuits challenging the emergency declaration on statutory and constitutional grounds, while supporters say Trump’s national emergency is no different than those declared by his predecessors.

Trump asserted his executive power after Congress failed to reach a deal that satisfied the president, leaving only the judicial branch to decide whether either of its co-equal branches of government overstepped. The question for courts is not as simple as deciding whether Trump’s national emergency declaration is legal; they also must determine the extent of congressional and presidential powers, the meaning of relevant statutes and how much deference to give a president asserting significant executive authority.

In his official written declaration, Trump cited to a “border security and humanitarian crisis that threatens core national security interests.” He described the border as a “major entry point for criminals, gang members, and illicit narcotics” and said “large-scale” illegal immigration has taxed the government’s processing and detention resources.

The Federation for American Immigration Reform, or FAIR, a conservative immigration reform group based in Washington, D.C., agrees with the president’s assessment of the situation at the border. Ira Mehlman, FAIR’s media director, said failure to construct a border wall will leave America exposed to the threat of terrorism or other security threats.

What’s more, Mehlman said the federal judiciary is suffering as a result of illegal immigration into the country, noting there are some 800,000 asylum cases pending in courts. The political asylum program has been taken advantage of, he said, and that reality could cause the system to “collapse under its own weight.”

But opponents of the border wall insist there is no emergency at all. In announcing its intent to sue the Trump administration, the American Civil Liberties Union explicitly denied the existence of an emergency and claimed the president had said as much. That’s in reference to a statement the president made when he announced the national emergency, telling onlookers, “I didn’t need to do this. But I’d rather do it much faster.”

“This is a patently illegal power grab that hurts American communities and flouts the checks and balances that are hallmarks of our democracy,” ACLU executive director Anthony Romero said in a statement.

The ACLU’s stance on the national emergency — that its very existence is a violation of the separation of powers doctrine — forms the basis of most lawsuits filed in response to the declaration. Lisa Manheim, a presidential powers scholar and associate dean and professor at the University of Washington School of Law, said the threshold question is whether Congress authorized the spending Trump proposed for the border wall. If the answer is “no,” then a constitutional question arises, Manheim said.

But Gerard Magliocca, the Samuel R. Rosen Professor of Law at Indiana University Robert H. McKinney School of Law, noted Congress has delegated emergency powers to presidents many times in the past. The bigger question, Magliocca said, is whether Congress has the power to delegate its authority to the executive branch, a question that is generally answered with a “yes.”

Even so, attorneys say there are important differences between Trump’s national emergency and those declared by past presidents. One difference, Manheim said, is that the current national emergency is more politically charged than previous ones, which will require courts to wade through both law and politics to reach a resolution.

“Generally speaking, the government runs more smoothly when these big, politically charged issues are worked out in the political branches rather than pushed into courts,” Manheim said.

But the stalemate between the legislative and executive branches means the judicial branch must get involved and answer several statutory questions about the scope of the president’s emergency powers. One of the key issues is Trump’s decision to use military construction funds to pay for the border wall.

Among the groups arguing the president cannot use military construction funds for such a purpose is the Tucson, Arizona-based Center for Biological Diversity, which is challenging the emergency declaration on statutory grounds and claiming the construction of a border wall would perversely impact southwestern wildlife. Brian Segee, the center’s senior attorney, said the statute at issue in the funding question — 10 U.S. Code section 2808 — cannot be used as a means to meet Trump’s desired end.

Segee said the plain language of section 2808 — which allows the Secretary of Defense to undertake “military construction projects” in the event of a national emergency requiring the use of the armed forces — does not apply to a border wall. However, Segee also said there’s very little caselaw interpreting the National Emergencies Act, so it’s difficult to predict how courts might read section 2808.

What’s more, Manheim noted Trump plans to use funds under section 2808 only after expending two other sources of funding. According to a fact sheet released by the White House, the president will first use about $601 million from the Treasury Forfeiture Fund and up to $2.5 billion under 10 U.S.C. 284 before allocating up to $3.6 billion under section 2808.

Given that sequence, Manheim said courts may have to determine the legality of using funds from the other two pots of money before they get to the question being raised under section 2808. And if the legal fight stretches beyond the 2020 election, Magliocca said those questions may never get answered if a new administration reverses the border wall plans.

If he had to guess, Magliocca predicts the Supreme Court will not allow Trump’s emergency plan for the border wall to proceed. The issue doesn’t present the same kind of national security questions like those presented by the controversial travel ban, which SCOTUS upheld, Magliocca said.

Additionally, the law professor agreed section 2808’s definition of “military construction project” doesn’t seem to contemplate a border wall. However, he also said the justices will likely do their best to avoid taking up the issue at all.

Manheim agreed that the highly political nature of the border wall fight is not something courts would normally want to be involved with. But with pressing questions looming about the amount of deference to give to a president, she also said the judiciary may have no choice but to wade into the world of politics in an attempt to discern the law.

“President Trump is not only pushing the legal envelope,” the Washington law professor said, “but he’s also introducing politics into a place where it’s very difficult for the courts to serve as the referee.”•