The fortunate thing about “Captain Marvel” is that nothing, and I mean nothing, is as it seems. Though one does not dare reveal the plot, suffice it to say that a shockingly surprising turn of events occurs that saves the film from its disjointed, confusing beginning.

The film belongs to Brie Larson as Captain Marvel and Samuel L. Jackson as Agent Nick Fury. They demonstrate their incredible talent as an alien warrior and Earth police detective who form a friendship as they try to determine if would-be enemies are actually friends. 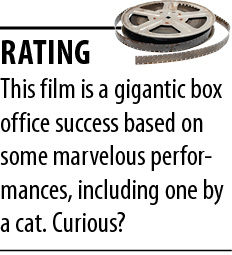 Larson plays an extraterrestrial Kree warrior who wrestles with her all-but-forgotten past as she ends up traveling back to Earth in 1995. This involves a very funny moment where she crashes into a Blockbuster store, and she spends a moment looking at DVDs where she discovers that “The Right Stuff” preceded any Marvel films to hit the big screen. She gradually discovers that she was a U.S. Air Force pilot by the name of Carol Danvers and in the process reunites with an old co-pilot named Maria Rambeau, played with grace and style by Lashana Lynch.

As a Kree warrior, Captain Marvel was following the training she received under the leadership of Supreme Intelligence (Annette Bening) and Yon-Rogg (Jude Law) on how to use her powers to eliminate another alien civilization known as the Skrulls. A pointy-eared people who are able to transform into a perfect likeness of an adversary, they were led by Talos, the always-appealing Ben Mendelsohn.

Larson remains one of my favorite actresses, and I have greatly admired her ever since becoming enchanted by her performance in “Short Term 12” (2013) and her Oscar-winning role in “Room” (2015). Here, her character is further helped by the performance of Mckenna Grace who plays Carol at age 13. Grace is a fascinating young actress, and you only need to watch her in “Gifted” (2017) if you have any doubts.

However, as “Captain Marvel” initially dances on the edge of a cinematic mess despite some wonderful special effects, enter the great Samuel L. Jackson as Agent Nick Fury. The endearing friendship that develops between Fury and Captain Marvel provides the strength of this film. On top of that, wait until you see his attraction to a wandering cat going by the name of Goose. This little feline steals the movie as he accompanies our heroes on land and in space, demonstrating some unanticipated hidden powers that prove to be quite helpful.

While this film is the 21st Marvel studio film to be released since 2008, it is co-directed by Anna Boden, the first woman to direct any of these popular films. Given that it is also the first to feature a female superhero in the lead, the film has attracted a large number of women over a wide age range for obvious reasons.

I thought Hollywood considered only men as movie heroes. What happened to our precious values? Good Lord, the next thing, a woman will be president. I suggest her nickname should be “Wonder Woman.”

Having just seen director Damien Chazelle’s 2018 film “First Man,” I was initially reticent about seeing this documentary. However, having discovered that director Todd Douglas Miller used unseen footage for much of the film, along with the fact that it was playing at the IMAX in downtown Indianapolis, I quickly decided to hunt it down with a group of my friends. 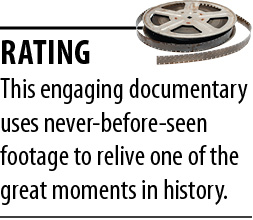 And I am delighted that I did so, as are my friends. It is a wonderfully engaging film from beginning to end, and it creates the feeling that you are reliving the actual event in 1969. Other than a very moving narrative by Walter Cronkite at the beginning of the film, the rest of the dialogue becomes largely irrelevant.

As the movie opens, you watch a large Caterpillar tractor tow the Saturn Rocket to its launch site. You then see an overview of the tens of thousands of tourists who camped at various places at Cape Canaveral to personally witness Armstrong, Aldrin and Collins blast off to the moon. The rest of the film alternates between the command centers in both Houston and Cape Canaveral and in the Apollo capsule as it navigates through space.

Chazelle’s “First Man” spent a great deal of time focusing on the personal lives of the astronauts, which included Neil Armstrong and his wife Janet, played memorably by Ryan Gosling and Claire Foy. This documentary concentrates solely on the astronauts and hundreds of technicians who worked to bring our boys safely home to Earth after their eight-day voyage.

One of the most powerful moments in this film involves our astronauts on their return to Earth. As they loosen up a bit, they listen to John Stewart’s “Mother Country” being played on a weightless cassette player. The song is then magically enhanced for the enjoyment of the audience, and I’m sure I’m not the only one who wanted to immediately go out and hunt down that brilliant song.

While we all know what happens on this space adventure, there has never been a more emotional moment recorded on film than when Armstrong first steps on the moon, saying, “That’s one small step for man, one giant leap for mankind.” You also watch Armstrong and Aldrin as they set up an American flag, a scene deleted for unknown reasons in “First Man.” Regardless, as you watch Armstrong stand upright as he salutes the flag, you are reminded of a time where patriotism had meaning for most Americans despite the ongoing controversy surrounding the Vietnam War.

The film recreates life in 1969 in a fashion forgotten by nearly everyone. It was amusing to watch the clothes, cars and hairstyles of the tourists, and you are left laughing as you watch them and NASA employees use pay phones to make contact with friends and family. There is also a moment where you listen to a commentary that a senator by the last name of Kennedy drove off the Chappaquiddick bridge while our boys were in space.

In that regard, I should also point out the scenes where many NASA employees work before small computer screens. You are left imagining how space travel could be simplified today with technological advancements that made 1969 seem like watching Columbus in 1492.

This film was released in Indianapolis for one week only, and its last date at the IMAX was March 7. While I’m hopeful that other theaters will be able to find a way to play it on the big screen, hunt it down. You will enjoy the experience.•