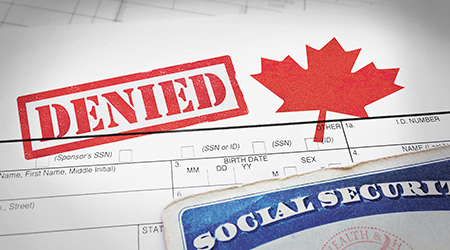 Social Security is complicated. And when retirees are entitled to benefits from more than one country, the process becomes even more convoluted.

A Canadian woman with careers in both Canada and the United States has experienced those complications firsthand and is seeking legal redress for what she says are wrongly withheld benefits. Lorraine Beeler has sued the Social Security Administration in the U.S. District Court for the Southern District of Indiana, alleging her U.S. retirement benefits were wrongly reduced based on similar benefits she receives from Canada.

Under Beeler’s theory — raised in the class action Beeler, et al. v. Colvin, et al., 1:15-cv-01481 — the reduction of her U.S. benefits is a violation of two Social Security provisions: The Windfall Elimination Provision and the U.S.-Canada totalization agreement.

According to the class, both the statutory language of the WEP and the terms of the agreement prohibit the reduction of Beeler’s benefits. The Social Security Administration declined to comment on the case, but Joe Dehner, a Cincinnati Frost Brown Todd attorney working on Beeler’s case, said the administration disagrees with the class’ argument.

A merits ruling on Beeler is currently pending before Senior Judge Sarah Evans Barker, and a ruling favorable to the plaintiffs could restore full Social Security benefits for Canadian workers with U.S. careers. And with similar litigation pending in the District of Columbia, Dehner said workers in all of the nearly 30 countries that have U.S. totalization agreements could see their benefits fully restored.

Beeler, who is now retired in Arizona, built a 20-year career in Canada before marrying an American and building a 20-year career in the United States. According to Dehner, Beeler and her husband planned for their retirement based on the assumption that she would receive the full benefits she believed she was entitled to under the U.S. Social Security system.

The Beelers’ retirement plan was also based around two forms of Canadian benefits: the Old-Age Security pension, or OAS, and the Canadian Pension Plan, or CPP. In Quebec, the Quebec Pension Plan, or QPP, is the equivalent of the CPP.

“But the U.S. has said, ‘If you’re getting that, you’ll get only 50 percent of what you were expecting to get from Social Security,’” Dehner said. “That almost always comes as a great shock to people, and that’s what happened to Lorraine.”

The problem, Dehner said, is that the Windfall Elimination Provision was applied to Beeler’s U.S. pension. The WEP is a component of Social Security designed to reduce a worker’s Social Security benefits by up to 50 percent because the worker is paying into a noncovered pension plan, said Shalina Schaefer, of counsel in Ice Miller LLP’s Indianapolis office.

Schaefer gave the example of a teacher paying into a state teacher’s retirement fund, which is noncovered because it does not pay directly into Social Security. Noncovered positions are also found in state and local government, she said.

The Social Security Administration's position, Dehner said, is that if you’re not paying into Social Security, you shouldn’t be able to get the full amount of benefits you would otherwise be entitled to under law.

The hitch, according to the SSA, is Beeler’s Canadian pension. According to online guidance provided by the Social Security Administration, Canadian workers are entitled to the OAS if they are at least 65 years old and have been a resident of Canada for at least 10 years after turning 18. Under the CPP and QPP, workers can receive their full pension at 65, or a reduced pension at 60, if they have completed covered work for at least one year.

In the United States, workers must have 40 quarters — or 10 years — of coverage in order to qualify for Social Security benefits. But under most of the agreements, including the one with Canada, U.S. workers who have at least six quarters of coverage in America can still receive American benefits if their coverage in a foreign country would get them to the 40-credit threshold.

According to Dehner, Canada does not reduce the amount of Canadian benefits U.S. workers can receive pursuant to the totalization agreement. But as Beeler’s case indicates, the States do reduce the benefits Canadian workers receive in at least some situations.

Under the Social Security Program Operations Manual System, or POMS, Schaefer said the guidance is that workers who receive totalization benefits are not subject to the WEP. Instead, their benefits may be prorated to reflect the number of U.S. credits earned. Further, the online guidance notes that receipt of the OAS pension — which is based only on Canadian residence — won’t affect the way U.S. benefits are calculated.

Caselaw on this legal question is thin, but Dehner pointed to the Colorado case of Rabanal v. Colvin, 11-cv-01569, in which a federal judge reversed the application of the WEP based on the plaintiff’s Spanish pension. That pension, like the OAS, was based on Spanish residency and, thus, was not subject to a deduction.

Schaefer pointed to one situation in which Beeler’s benefits might have been rightly reduced: if she had earned the full 40 credits in America. In that case, the supplemental part of the totalization agreement would not have kicked in, which would mean the agreement might not protect her from the WEP.

A similar case, Turnbull, et al. v. Berryhill, et al., 1:16-cv-01750, is currently in the preliminary stages in the U.S. District Court for the D.C. Circuit. That case involves 24 other countries that are also subject to U.S. totalization agreements, Dehner said.

The Cincinnati attorney expects the outcome of Beeler to have a significant impact on Turnbull and, more generally, how Social Security benefits are applied to foreign workers.

“The point there is that the U.S. should respect its agreements,” he argued.•