While I’m not saying I didn’t like “Us,” I clearly didn’t love it. It is nearly two hours long, and it suffers from repetitive scenes that weaken its horrifying impact.

This horror film tells the story of Gabe and Adelaide Wilson, a married couple traveling with their two children to return to a countryside home sitting near a lake where Adelaide grew up. The movie begins with Adelaide as a child where she has an unfortunate encounter in an arcade funhouse that still haunts her. 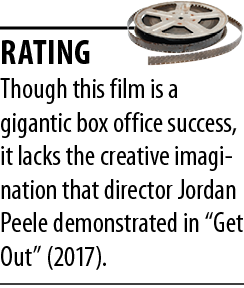 Soon after arriving at their home, a family of four strangers appears in their driveway at night. Refusing to leave, they eventually break in and assault the terrified Wilson clan. The trauma is increased by the discovery that these intruders are doppelgangers disturbingly resembling the Wilson family.

The movie reaches its peak at the very moment the Wilsons are left fighting for their lives. Though they were able to escape in their vehicle, the danger intensified when they discovered that subterranean human creatures were attacking other homes after developing the ability to resemble their victims.

The film is mercifully helped by the strong performance of Lupita Nyong’o as both Adelaide and her female lookalike known as Red. Nyong’o is alternatively terrified and sinister, and you begin to suspect that their relationship has something to do with Adelaide’s encounter as a child in the funhouse referred to above. As the film drags on a bit, Nyong’o again displays the skills demonstrated in last year’s “Black Panther,” the unfortunately overlooked “Queen of Katwe” (2016) and her Oscar-winning role in “12 Years a Slave” (2013).

In addition, while Winston Duke, also fresh off “Black Panther,” gives a credible performance as Adelaide’s beleaguered husband, it is Elisabeth Moss who dominates the movie with a very short appearance as Adelaide’s friend and neighbor. Though this is a spoiler alert, wait until you see her morph into her doppelganger killer and begin to terrorize anyone she encounters.

Jordan Peele, who also wrote the script, unfortunately overcooks the film with social references. For example, there is a moment when Adelaide was a child when you hear an advertisement where Americans were going to stand hand to hand from sea to shining sea to fight the problem of hunger. When the doppelgangers emerge from their underground tunnels and sewers clad in red, you see them standing in a long line hand in hand that leaves you guessing if they are simply imitating the humans that they killed.

At that moment, “Us” begins to mimic the classic “Night of the Living Dead” (1968). I wish it would have been as good.

“To Kill a Mockingbird”

Though many of you have seen “To Kill a Mockingbird” at least once, I missed it on the big screen given when it was released in 1962. Fortunately, I just saw it with two friends at the refurbished Castleton Square Theatre in Indianapolis, and its emotional impact exceeded my high expectations. This is a film for the ages.

As most of you know, Gregory Peck plays Atticus Finch, a widower who practices law in a small southern town in 1932. Though Peck remains one of the great actors in movie history, this was the only Oscar he won in his lengthy career. 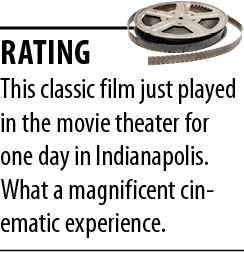 The film centers on his dedication to his two children, Jem, 10, and Scout, 6. Based on the Pulitzer Prize-winning book by Harper Lee, the film is narrated by an adult Scout as she reflects on a summer with her family that she will always treasure.

As Scout prepares to start the first grade, her and her brother are mesmerized by a neighbor known as Boo Radley, an emotionally disturbed guy who never leaves his home. Though they repeatedly attempt to sneak up to his house to find a way to see him, a long-distance relationship develops that comes into play at the end of the film.

In addition, Atticus is asked to represent a poor black man who is accused of rape. Though he readily agrees to accept this responsibility given his dedication to the rule of law, racial hatred creates turmoil for himself and his family. The “n-word” is commonly used, and at one point, Atticus is forced to sit in front of the jail to keep a large group of white racist thugs from killing his client.

The end of the film focuses on the trial, and it defines the role of a defense attorney in our legal system. While Peck’s Finch uses a powerful cross-examination to expose the lies being told by his client’s accuser and her father, an all-white male jury reaches a verdict that was totally expected even if you have not seen this film.

The film’s ending provides one of the greatest conclusions that you will ever experience in a theater or watching movies at home. Finch’s despair over the verdict is enhanced when his client is shot and killed by the police while trying to escape. Additionally, after his kids are viciously attacked in the woods by the drunken, violent father of the alleged rape victim on Halloween night, they are saved when Boo Radley comes out of nowhere to rescue them. You will be left with tears in your eyes when you see Boo standing sheepishly in the Finch’s home after his heroic act. It is worth remembering that Robert Duvall played Boo Radley, his first film role on the big screen.

To be frank, this film provided my inspiration for becoming a defense lawyer. As I watched Peck’s closing argument while in college, I realized the profession I was going to pursue. Our cherished democratic freedoms cannot exist without dedicated defense lawyers demanding that the government prove their case in a court of law.

Two final thoughts about this film that have stayed with me for decades. As seen from the guilty verdict returned in this case, I quickly learned that you don’t keep a won-lost record if you become a defense lawyer. Though there will be times when your heart is ripped out, you learn the fundamental principle of being a defense lawyer to be simply this: “Son, they may convict you, but they are going to have to come over me to do so!”

And then there was the classic scene where Atticus left the courtroom after his client was convicted. The court being segregated, the black family members were forced to sit in the balcony where his children joined them. As he reached the edge of the balcony, all of them stood up, with the father of the client telling his daughter, “Stand up, Scout, your father is passing.”

Atticus Finch was a man of honor. He may have lost his Mockingbird, but I will always remember him when standing up to deliver a closing argument.•