Ignore the several critics who are downplaying this fine movie. Incredibly, they did the same thing in the last two years with “Green Book,” “Bohemian Rhapsody,” “The Greatest Showman” and “Three Billboards Outside Ebbing, Missouri,” and they once again demonstrate that they should be seeking other employment. I can only implore you to ignore them for reasons that will become all too obvious when you buy a ticket.

Tim Burton’s “Dumbo” builds momentum in the same way the Space Mountain ride does at Disney World. You settle into your seat as your roller coaster slowly climbs its initial hill, only to quickly absorb an emotionally thrilling experience that will leave you grinning with some wiping wet eyes at a conclusion you will cherish. 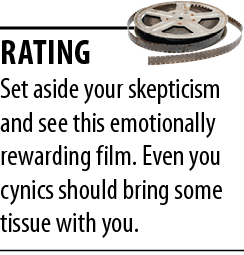 Danny DeVito plays Max Medici, the owner of a struggling circus. The film takes place in 1919 as Holt, a former stellar horseback rider, returns from World War I missing his left arm. An early powerful moment of the film takes place when Holt embraces his young son and daughter at a train station. The agony of that moment is increased when you find out Holt’s wife and the mother of his children died of influenza while Holt was away in Europe.

The original “Dumbo” was released by Disney in 1941, and as a result nearly everyone knows the story. It centers on a baby elephant with extraordinarily long ears who astonishes everyone by demonstrating he can fly. The story devolves into a competing struggle between two circus organizations to see who can financially benefit from Dumbo’s ownership.

While kids will be immediately attracted to this film, it is an adult film given its dramatic impact. DeVito gives his best performance in years as a man trying to keep his circus viable. While he is a caustic employer, he wants to do all he can to make sure his circus employees are able to make a living pursuing jobs they love.

However, the most emotionally powerful moments of this film center on the simple impact of family. Dumbo is left crushed when his mother is sold to another organization. The scene where they join trunks as Dumbo’s mother is locked into a railroad car recreates the moment that nearly everyone can recall from the original film.

But the focus on family goes beyond that moment. Colin Farrell is wonderful as Holt, a man who tries to re-establish a relationship with his two children as they all wrestle with the loss of a wife and mother. They all begin to rediscover the joys of this existence by trying to help Dumbo do the same thing. The little elephant joins them in that quest, and I am at a total loss on how certain critics fail to capture that magnificent moment.

What also adds a significant impact is the appearance of a man named Vandevere and his beautiful assistant, Colette (Eva Green). Vandevere is the owner of a larger circus organization who proposes to buy out Medici in order to gain control of Dumbo. Michael Keaton does a great job playing Vandevere, and you quickly suspect that lurking under his kind approach to the circus is a guy without a soul.

Green gives an excellent performance as a highwire performer who is supposed to link up with Dumbo as he flies. Colette’s obligation to Vandevere gradually collapses as she becomes attached to both of Holt’s children, as well as to Dumbo’s future. And if you are asking, “Who is Eva Green?,” hunt her down in “Dark Shadows” (2012), “300: Rise of an Empire” (2014), “Sin City: A Dame to Kill For” (2014) and “Miss Peregrine’s Home for Peculiar Children” (2016).

The film functions as an emotional magnet as you watch Holt’s children’s dedication to reuniting Dumbo with his mother. Unexpected moments of high tension are created when lives are left on the line, and it makes the film all the more admirable.

While I won’t give away the ending, it will either have you crying or joining my two dear friends who accompanied me to this film by mocking my emotional response. You know that one way or the other, the characters are going to have to say goodbye to Dumbo, and you only hope that everyone can be rewarded with him once again joining his mother. Buy a ticket and enjoy that moment.

I was overwhelmed by this movie. You are not likely to see a more emotionally powerful film than “The Mustang,” directed by Laure de Clermont-Tonnerre. It takes place entirely in a Nevada prison, and it will repeatedly tug at your heartstrings.

More than 100,000 mustangs roam the West, and a number are captured every year for various reasons. Some are taken to prisons where inmates train them. While this film focuses on that experience, what you discover is the life of imprisoned felons and the challenge they face in trying to remain human. 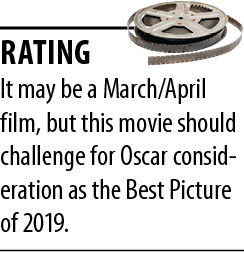 This film will have special meaning for trial attorneys, particularly criminal defense lawyers such as myself. I have visited state and federal prisons in the last 40 years, and you simply don’t know the monumental impact prison life has on inmates and their families until witnessing it firsthand.

Here, Matthias Schoenaerts gives an Oscar-worthy performance as an inmate named Roman, a guy who has no use for anyone, including himself. Having been incarcerated for 12 years in Nevada for what you learn was severely injuring his wife in a fight, he prefers to live in isolation.

However, Roman is challenged out of his self-imposed cocoon by an aging prison horse handler named Myles, played with astonishing charm by Bruce Dern. It seems no one can train a remaining violent mustang, and Roman is thrown into the task despite having no experience with horses.

What you watch evolve is Roman’s relationship with this mustang, a horse that obviously feels as confined to a prison as any of the human inmates. They repeatedly battle each other, and you wonder if Roman can be drawn out of his isolation by a horse that clearly feels the same way. They both reminded me of Paul Newman’s great line in “Cool Hand Luke” (1967): “What we’ve got here is a failure to communicate.”

Additionally, the movie leaves a powerful impact when you see the relationships of the various prisoners. Roman’s eventual roommate is a racist, drug-using scoundrel, and the impact this has on one of Roman’s fellow riders named Henry (Jason Mitchell) is heartbreaking.

The film’s crescendo is reached when our riders perform in a small arena in front of a crowd participating in the auction. Roman is the proud last rider, but his horse reacts violently when a helicopter flies overhead. The horse clearly has an emotional response to a flying vehicle that played a role in his initial capture.

The ending left me admittedly sobbing as I left the theater. Dern’s Myles confronts Roman after no one offered to purchase his horse after throwing him against a fence, and he is told his beloved stallion is going to be put to death. What follows is a moment in film you will never forget, and I can only urge all of you to see this remarkable film as soon as possible.•