A veteran practitioner regarded as an authority on real estate law, Rory O’Bryan also is hailed as a mentor to those who work with him and a well-regarded instructor at his alma mater, IU Maurer School of Law. Perhaps those are some of the reasons he’s earned the nickname “Yoda.” Like the “Star Wars” hero, colleagues say O’Bryan’s compassion and wisdom have made him a beloved and revered leader — one whose example makes those around him better practitioners. 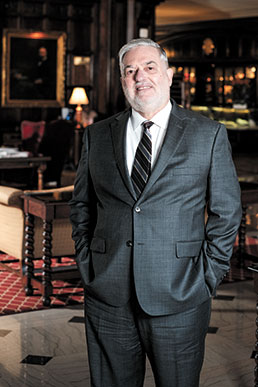 How does being a professor at IU Maurer improve your skills as an attorney?

Teaching at IU Maurer Law School has broadened my perspective and deepened my knowledge of real estate and mortgage law. Before I began teaching in 1998, I focused only on issues arising in my practice under Indiana law. For the past 20 years, my teaching has fed my natural curiosity about the full spectrum of issues arising throughout the United States, including the differences among the states’ judicial and legislative responses to those issues. Also, teaching has increased my confidence to speak contemporaneously on a subject within my knowledge and experience to any audience. It has greatly improved my abilities to prepare and make a presentation on any legal issue or topic while fielding questions and engaging in dialogue to better address the interests and knowledge level of the audience — valuable skills for any lawyer.

I was first motivated to pursue a career in law by my high school government teacher. Assigned readings and class discussion piqued my interest in legislative apportionment, and I wrote my term paper for the class on three Supreme Court cases: Baker v. Carr (1962), Reynolds v. Sims (1964) and Wesberry v. Sanders (1964). I read the cases over and over, along with newspaper reports and other articles I found in the library to help me understand their significance. During that same year, for an English composition class focused on the Great Books of the Western World, I chose to write a paper on “Natural Justice and Law” based on readings from Plato, Aristotle, Socrates, Hobbes, Locke and others. I was a senior in high school at the time, and that’s when I decided to study law, although I never met an actual lawyer until I enrolled in an undergraduate business law course about three years later.

What makes a good mentor?

Good mentors must be dedicated, patient and open-minded. They should be attentive listeners and possess the self-awareness to differentiate between an “assignment problem” and a “performance problem” — unsatisfactory performance often results from shortcomings in the assignment process rather than the assignee’s poor performance. Finally, good mentors are servant leaders who lead by example and place what is best for their colleagues or firm ahead of their self-interest.

That’s a tough one. I was 10 years old when I began carrying newspapers. I’ve worked nearly every day of my life since, including at least a dozen different jobs ranging from carrying newspapers and mail to working as a “hooker” on the “hot beds” (slang for a job even worse than it sounds) in an East Chicago steel mill. My most memorable job was that of a stock boy at our neighborhood grocery store throughout my high school years. My peers were mostly neighborhood friends, my bosses were (mostly) terrific, and we all learned the meaning of hard work and had fun doing it.

Theodore (Ted) Boehm and Charles (Chuck) Whistler were my most significant mentors. From Ted I learned the importance of thorough, clear and precise thinking and writing. I’ll never achieve his standards, but I’ve never abandoned my quest to do so. Chuck taught me to seek and negotiate creative solutions to difficult issues in complex business transactions. He was respected, admired and loved by many, and his premature death was a blow to our entire community. His legacy inspires me to this day.

Never shy away from challenges, but don’t let your work overwhelm your personal and family life. Set reasonable boundaries and try to find a healthy balance between your professional and personal lives.  The years go by faster than you can imagine, and you have just one chance to get it right.

Legislative and congressional districts should be established by an independent, nonpolitical process. Our current system produces too many noncompetitive districts, which has resulted in both parties electing candidates with extreme views at the expense of true statesmen such as Richard Lugar and Lee Hamilton.  Districts should be based solely on population, regardless of demographics or voting patterns, and should follow county lines insofar as possible and otherwise follow straight lines or major thoroughfares. A non-political commission should set the guidelines for qualified experts to program into computers for random determination of district boundaries.

My career as a 5-year-old barber was cut short when my 3-year-old sister brandished her new ’do to our horrified mother. My defense that she asked me to remove her curly locks was not well-received by the court of parental opinion. To this day, my sister blames me for her poker-straight hair.

It’s not about money or prestige. If you don’t love the law and really want to use it to help people, don’t pursue a legal career. Don’t pursue a legal career solely for personal gain, whether monetary, celebrity or whatever. Too many lawyers who have done so have embarrassed themselves and the profession. That’s not to say it is wrong to use a legal education or a few years in a law firm as a stepping stone to move into politics or business. But go into it with your eyes open and with the attitude that a legal career truly is a profession, not a business.

Why were you drawn to real estate law?

I had been at Baker & Daniels four or five years doing other things before doing any significant real estate work. My first real estate client was a developer of apartment projects who kept me involved in his real estate projects all the way from land acquisition through construction financing to the long-term financing stage after the apartments were rented out. As I learned more and more about the economics of commercial real estate development and ownership, it just seemed to click with me. A few years later, Ted Boehm introduced me to Michael Browning, and that introduction launched my advanced real estate education and “fatal attraction” to real estate practice.

The relationships and friendships developed. Many with attorneys, old and young, in my firm and in other law firms in Indianapolis, throughout Indiana, and in virtually every state; and many with clients, several of whom have been clients for 20 years or longer and are like family to me.

Spending time with my three grandsons, wife and daughters; reading; trying to play golf; and attending or watching baseball games, from Little League to the Major League.•