Joseph L. Smith Jr. has helped lay the groundwork for numerous major projects in central Indiana, but the most impactful may be yet to come. Smith is helping steer development of the new Marion County Criminal Justice Center, which he believes has transformative potential. But Smith says he is proudest of his efforts to promote diversity in the legal profession — a role he embraces individually and in his firm. He is active in leadership initiatives and has served in multiple community and public service capacities. 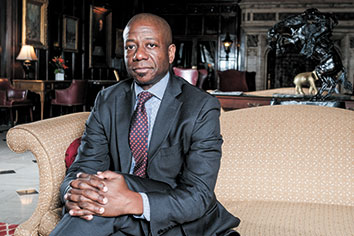 What’s one major project you’ve been involved in that you’re particularly proud of?

I’m very proud of our recent efforts to get City-County Council approval for the Marion County Criminal Justice Center. This facility could be transformational in its holistic approach and the resources we’re dedicating to rehabilitation. We’re partnering with Eskenazi Health to provide on-site mental health services, and the facility will include an intervention center to provide offenders with programs and services to keep them out of jail. All in all, I think we’re taking the right steps to help mitigate recidivism and address some of the broader issues in our criminal justice system.

It’s a pretty generic story, to be honest. I was a junior in college, majoring in economics, and I was undecided about what I’d do after school. I had a friend and fraternity brother who always dreamed of going to law school. He and I were talking, and he mentioned that he thought I’d be a good lawyer, as well, and maybe we could go to law school together after college. He sold me on it.

One of my more memorable job stories was perhaps my shortest-lived job. In high school, I got a job working for a moving company, but I hurt my ankle pretty badly the day before my first day. I spent all day attempting to move large TVs, couches, chairs, heavy stuff, all to the detriment of my body while being yelled at by these elder statesmen and my boss. Then I quit.

Why is developing young leaders such a personal passion for you?

I felt like I was a part of a mini-generation that, in some ways, was overlooked. My predecessors were viewed as pioneers who broke new ground in civil rights and led the charge for diversity, and then there was a sense that, once those barriers were broken, all our problems were solved. It’s important to me that our younger leaders don’t feel overlooked or forgotten or unheard, and to help expedite their rise in the profession.

How do you encourage people to become involved in community service?

Every time I speak to any law student or young attorney, I tell them that community service is the best way to become a well-rounded professional and person, and to become part of the fabric of society. You have to make community service a priority. Whether it’s bringing them into an organization I’ve been involved with or simply encouraging them to pursue an organization or cause that caught their eye, my message is always to get involved and don’t look back.

My father inspired and mentored me, and I try to live by the example he set. He was always a civil servant. He was a humble soul, taught me the value of work ethic, told me to always have a job and stay committed to career goals, and that to get where you want to go is not easy and you have to work hard. He would give anybody the shirt off his back, a place to stay, to eat, drink and be merry — although my mom was the one who did all of the cooking.

I enjoy watching my children play soccer, working out and, though I don’t do it very well, playing golf.

I played soccer at DePauw.

I’d tell my young self to slow down and try to live each day one day at a time and appreciate that which is before me. Slow down, don’t rush through things and smell the roses.

Let’s do two laws. First, I would pass a hate crimes law in the state of Indiana. It’s a travesty that people don’t recognize that historical prejudices exist and can be the motivating force behind criminal acts, often violent ones. Indiana is one of only five states without a hate crimes law, and it’s time we remedy that. Secondly, I would legalize marijuana. Using marijuana is a non-violent crime, and we know that marijuana laws are disparately enforced, leading to more arrests and higher incarceration rates among minority and low-income communities. Legalizing marijuana would help to mitigate these social justice issues and create additional business and tax revenue opportunities, as well.

I’d tell them to pursue a legal career if you indeed want to be a lawyer and have a path for which a J.D. is necessary. Don’t do it because you see it as a high-paying profession and you want to make money. A career in law can be a disheartening and difficult path if you do not pursue it for the right reasons.

Helping clients succeed and inspiring young diverse professionals to keep at it!•