For nearly 55 years, Syd Steele has been practicing law — from his beginnings in the armed forces to forming his own firm where he practiced with friends and colleagues for more than three decades. While Steele is thinking about retirement these days, his colleagues say he still puts in full work weeks, and Steele says he still loves the career he felt destined for from an early age. Whatever the future holds, Steele has left a positive impression on the Indianapolis legal community and the city itself. 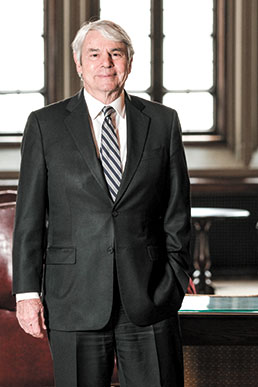 Prior to law school, I graduated from Purdue with a Bachelor of Science degree in mechanical engineering. While at Purdue I decided to become a lawyer, primarily because of the independence I believed that career would give me. And should I choose, I could run for political office. My first three years out of law school — 1964 through 1968 — were spent with the U.S. Army in Germany. I received my commission through ROTC at Purdue, so my time in the Army was in the Ordnance Corps, where I was assigned the post legal assistance officer. Counseling soldiers and trying court martials in Germany was a most rewarding experience, giving me confidence and confirming my choice to be a lawyer, and now more specifically, a litigation attorney.

Although I did not know at the time, while in high school in Martinsville, I recall the respect my father had for his lawyer, who would occasionally come to our house to counsel my dad. That left an impression on me that I am sure influenced my decision to become a lawyer.

What are your thoughts about retirement?

In 1982, I was burned out. So, although I had little experience riding a motorcycle, and with an understanding wife and law partners, I bought a BMW and rode from Indianapolis to Alaska and back home, over 10,000 miles total. Camped along the road or in parks almost every night and met the most interesting people along the way. That six-week “sabbatical” road trip was worth it. It recharged my batteries and reinvigorated me. It wasn’t long before I was back again to my full-time practice. I am fortunate to be practicing at Kroger Gardis & Regas, which has no mandatory retirement date. As long as I am able and desire, with an active practice, I can continue in my chosen profession. Although I expect to retire later this year or next, I haven’t thought a lot about retirement or what I will do with my time. Perhaps I’ll undertake a research project on my heritage and construct a Steele family tree, continue my community service and enjoy my grandchildren. And read all the books I’ve collected but haven’t had time to read. Historical personalities are
most interesting.

The most rewarding aspect of my practice is the intellectual challenges of the law and problem solving, and the camaraderie with my partners over my career, including Kroger Gardis & Regas, where I have thoroughly enjoyed the practice since 2003.

What community service efforts have been most meaningful to you personally?

My practice has given me the opportunity to be involved in community service. After his election in 1967, when our country was in turmoil over the Vietnam War and race relations, Indianapolis Mayor Richard Lugar appointed me to the “Mayor’s Taskforce for Black Capitalism,” which led to service with the Indianapolis Business Development Foundation and the opportunity to work with community leaders such as Henry Bundles and others. Currently, I’m a board member and vice chairman of the Center for Leadership Development, which serves and encourages a college education for minorities in our community.

When I’m not in the office, I most enjoying skiing in Colorado and quiet times reading. And now with five grandchildren, it is a treat to spend time with them when I can (unfortunately, two live in California.)

If I had the power to change one law, I suspect it would be the Second Amendment to the Constitution. Not that I would do away with the right to bear arms altogether. To the contrary, I would rewrite the Second Amendment to limit that right so Congress and the states could better and effectively regulate the use of firearms so only qualified, law-abiding citizens could have access to firearms only for limited, defined purposes, e.g., self-protection or recreational or subsistence hunting, and subject to a periodic renewable license. There are too many killings that could be avoided with effective gun control laws.

Other than my six-week trip by myself to Alaska in 1982, I’m pretty much an open book. However, most people probably don’t know that I was bedridden while in high school for about four months, and attended only 3 ½ years of high school. I fully recovered, ran track in high school and was elected president of my junior and senior classes at Martinsville High School, where I grew up. At Purdue, I was president of my fraternity, Phi Delta Theta, and the senior class. In law school, I was president of the Student Bar Association. Shortly after returning to Indianapolis from Germany, my wife and I were on our way to Chicago, where I had been offered positions with several law firms. Got as far as Lebanon on I-65, turned around and came back to Indianapolis to practice law, thinking I might run for Congress. Shortly after, I joined with my Purdue Phi Delta Theta brother, Bob Lowe, and Max Gray, who I knew from law school, and formed what became known as Lowe, Gray, Steele & Darko, where I practiced for 32 years.

What advice would you give to your younger self?

Well, I was passionate about the practice of law and representing my clients to the fullest, and I did not devote the time I should have to my family. So, my advice to my younger self would be, don’t let the practice of law become all-consuming. Take time to spend with your family and children and enjoy life. I was fortunate to have three children (who grew up too fast) and a wonderful wife of 48 years, Pam Steele, who passed away in 2012.•