If you’ve ever taken a leisurely stroll or bike ride along central Indiana’s Monon Trail, tip your hat to Alan Townsend for helping make the project possible. A leader of Bose’s litigation practice, Townsend’s practice areas range from business and land use matters to attorney discipline. He’s also active in bar organizations and community service, whether he’s steering efforts to consolidate units of government or helping a striving family become homeowners through Habitat for Humanity. 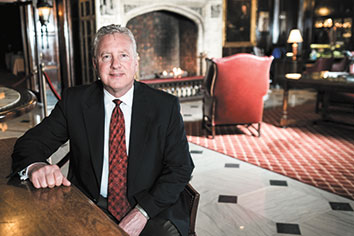 When you see the Monon Trail today, what do you think of?

When I see the Monon Trail, I think of two things. First, I remember Carmel Mayor Jim Brainard telling me, when we first started working on the land acquisition part of the project in 1997, that the Monon Trail would generate significant economic development in the City of Carmel. He was right. He knew what he was talking about. Mayor Brainard has always had a clear vision for what makes a community thrive. Second, I remember being part of a great team that worked tirelessly to make the Monon Trail, from 96th Street to 146th Street, a reality. The leaders were Mayor Brainard, City Councilman Ron Carter and city attorney Doug Haney, but there were many contributors. It was an honor to be part of such a great team and contribute in some way to the success of that project.

I decided to become a lawyer because my first career choice did not work out as I had planned. After I graduated from Purdue University in 1987, I moved home to join my father and my brother on the family farm in Blackford County. You learn a lot of life lessons growing up on a farm. Determination is one of them. I left the family farm for law school in Bloomington in the fall of 1989. I was determined to make it work.

I worked in a liquor store when I was at Purdue to help pay for college. Friday nights and Saturday nights were kind of chaotic. Some nights, we couldn’t move the kegs out the door fast enough. From time to time, someone would ask for my advice about wine. That was funny. I knew we carried red and white, but that was about it.

What do you get from your involvement with Habitat for Humanity?

Serving as a volunteer and on the board of directors for Habitat for Humanity of Boone County has been an incredibly rewarding experience. Habitat helps low-income people from Boone County who never envisioned being homeowners realize the dream of homeownership. Habitat gives those in need a hand up, not a hand out. When I started volunteering at Habitat, I quickly learned who the difference makers in Boone County really are. There is an amazing group of people in Boone County who are dedicated and motivated by service to others and service to their community. They don’t care who gets the credit. I like being around them.

What do you get from mentoring young people?

We have a number of exceptional young attorneys at Bose McKinney & Evans LLP. I enjoy working with all of them. I usually find that I learn more from them than they do from me.

What’s your advice to a young person thinking about a legal career?

Do it. A law degree is a great tool to have in your toolbox. It can open doors to opportunities you haven’t even thought of yet.

My parents, Wayne and Helen Townsend. They started farming together in 1955 on a small farm near Upland. Farming is difficult work, much more difficult than lawyering. When you farm for a living, you know there will be years, sometimes two or three in a row, where you will struggle financially. They encountered many difficult years, but I didn’t even know it at the time. They were always happy and involved in the community. They never complained. They were hardworking and confident in their abilities. They always supported each other. I appreciate that more now than I did then. I also greatly admire my wife’s parents, Jack and Sarah Norris. They are humble, kind and supportive. I could not have asked for better in-laws.

I have always enjoyed my three children. They’re all fun to be around. Though they’re all grown up, I like to be involved in what they’re doing as long as I’m not interfering. My wife and I met at Purdue University, so we enjoy all things associated with Purdue. I also love my church, Zionsville Presbyterian Church, and the good work it does. I learn a lot there, and I have a lot to learn.

Take your work seriously. Take yourself not so seriously. Honor your faith, your wife and your children, because those relationships will lift you up when you need it most.

The president of the United States would not be allowed to tweet. Seriously, Congress used to be one of the great deliberative bodies in the world. It now seems broken and ineffective as an institution. With just a few changes, I think we can find a way to fix it, or at least make it better. We probably need to start with meaningful campaign finance reform.

On Sept. 4, 1987, I married my best friend, Ruth Ann Norris. It was the best thing that ever happened to me. I love being married.

I started working in the litigation group at Bose McKinney & Evans LLP right after law school in 1992. It has been a great place to work and learn. I did my first trial in federal court in 1993 with Ron Elberger. He was a great teacher, as tough and tenacious as they come. Litigation is a series of challenges, one after another. Sometimes the facts are not on your side. Sometimes the law is not on your side. And sometimes there are difficult personalities involved. Even so, I always have enjoyed the challenge that comes with helping people, businesses or communities work through a difficult situation.•