Lauren Box has won praise for her legal abilities as an integral part of Barnes & Thornburg’s government service and finance practice. She also is a helpful mentor to young lawyers inside and outside the firm. Having been raised by parents who both were physicians, Box has steered her pro bono efforts toward health care and issues of public health. She also has been active in educational efforts and founded a nonprofit that seeks to promote urban farming and address food deserts in central Indiana. 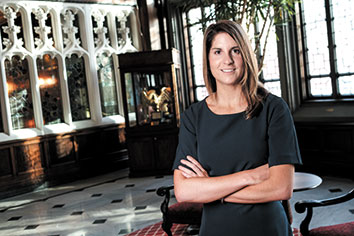 Probably in the CIA. In college, I got degrees in both business and international relations because I thought I wanted to pursue a career as a CIA analyst that traced assets and money trails to identify terrorist activity. I don’t think my parents loved the idea of me going into the CIA; they were always very supportive of our career interests and told us we could be whatever we wanted to be, but I think they were pretty happy when I chose the safer route of being a lawyer.

What prompted you to start an urban farming initiative?

My boyfriend worked on a (Community Sponsored Agriculture program) in New Hampshire for three years during college, and he introduced me to the concept. I thought it would be interesting to try and replicate the concept here in Indy to address, at least on a small-scale, some of the food insecurity and access to healthy food issues we face. Food insecurity and access to healthy food are such important issues underlying a person’s overall health, and I think we need to do everything we can to address these important issues.

Why are public health and education such personal passions for you?

Growing up with two doctors as parents, I’ve always been interested in health care, and I definitely see a need there. Good health is such a fundamental part of a person’s ability to succeed, and I think starting at the core with some of these public health-related issues will, in part, help with many of the other issues we see in society today. With respect to education, I got involved in K-12 education-related nonprofits through Barnes early on in my career and, through this service, I became aware of the significant need in K-12 education. There are a lot of people doing great work in this space, but I think the need is only getting bigger with some of the societal challenges we see impacting kids today.

Running and spending time with my family and friends. We have very sedentary jobs, so anything I can do to get exercise when I’m not in the office I really enjoy. Also, watching anything on Bravo.

I try not to focus too much on the future, because I often find myself focusing too much on my future goals and losing sight of everything I have to be grateful for in the present. But, hopefully just helping people and providing value to my clients.

I don’t know if there is one specific law I would change. In law school, I wrote my law review note about the negative economic impact negative LGBTQ legislation can have on a state and its economy, and I still think a lot of those lessons hold true. I think what’s great, though, is that we live in a society where we have a democratic process in place to repeal bad laws and enact good ones. I don’t think the process always moves as fast as people want it to, but I do like that we live in a society where we have that process.

Having lived in Boston for four years during college, what’s been the biggest adjustment moving back to Indiana?

I was born and raised in Indianapolis, so it wasn’t a huge adjustment coming back home after living in Boston for four years. Indianapolis had also changed a lot in those four years, so I was really excited to experience all of the new amenities the city had to offer.

What’s an interesting fact about you not many people know?

I think the most interesting fact about me is that I am a triplet. We turn 30 this year, so I don’t think the fact is as fun or cute as when we were kids, but it’s still interesting and something not a lot of people know. Another interesting fact is I can say words backwards. If you give me almost any word, I can immediately repeat it back to you backwards. I figured out I had this talent as a kid and I’m not really sure why or how I can do it. But it’s definitely a fun party trick as an adult.

The advice I always give to people who ask me about going to law school is to make sure you are doing it for the right reasons. I think too often people go to law school because it seemed like the next logical step after pursuing a social sciences degree, or because they want to make a lot of money, or because it’s what their parents wanted them to do. In my view, if you are doing it for these reasons, there is a good chance you are going to be disappointed in the practice. If you really enjoy the law and the logical/analytical thinking that goes along with it, or if you want to help people, I think those are two great reasons to go into the profession.

It’s hard to say what’s been the most rewarding aspect of my practice because there are a few. I think having the opportunity to provide excellent client service and helping my clients achieve their business goals has been very rewarding. Also, having the opportunity to work with some great people at Barnes & Thornburg has made coming to work every day worthwhile. Finally, I think the challenge of training as a young associate at a firm like B&T has been very rewarding. Obviously, many days are stressful and tiring, but I think constantly being challenged and having the opportunity to learn from some of the best have allowed my legal skills to grow at an exponential pace, and I am a far better attorney for it.

I don’t think there was one thing that really motivated me. I always excelled at writing and oral communications, so it was a logical career path after college. I also really enjoyed arguing as a child, so I think it was somewhat of a natural fit for my skillset. My mom always tells a story that she knew I was going to be a lawyer when I was three years old and used the Bible story of Cain and Abel to argue that I shouldn’t have to eat my vegetables. It was a pretty strong argument if I do say so myself.•