Neal Brackett is making his mark in the legal community as a top litigator handling white-collar criminal defense and complex, sometimes international matters. Aside from his extensive courtroom experience, Brackett also provides extensive pro bono work through the Neighborhood Christian Legal Clinic and IndyBar, and he’s a member of the Penrod Society, which organizes the annual Penrod Arts Fair in Indianapolis. His hometown — Chalmers, Indiana, population 496 — must be proud. 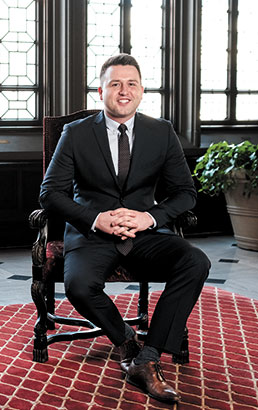 A colleague noted you grew up in “a one-stoplight town.” What do you draw from that experience?

Actually, my hometown doesn’t even have a stoplight; just a liquor store and a gas station. I graduated high school with 43 people — most of whom didn’t go to college. Everyone knows everyone and no one locks their doors. And everyone is expected to carry their own weight. To make money during high school summers, I roofed houses, built decks and cleared large rocks from farmers’ fields. I learned early on to work hard, be respectful and to never think I’m above any kind or level of work. Those lessons still guide me today.

When I was younger, I thought I’d be a doctor or a lawyer. Then I passed out while my brother was getting stitches, so that decided that. I participated in mock trial as a freshman in college and then worked full-time for a criminal defense attorney my last three years at Purdue. Those experiences confirmed I wanted to be a trial lawyer. During law school I met with dozens of attorneys around town and knew Barnes & Thornburg would be a great fit. And six years in, I know I made the right choice.

My wife Jenai, who I can proudly say was named an Indiana Lawyer Up and Coming Lawyer in 2017, and I love to travel. We have a map of the world in our condo and track where we’ve been with color-coded pins — red for anywhere we’ve visited and black if the food was particularly good in that city. As I write this, we’re gearing up for a trip to Osaka, Kyoto and Tokyo, Japan, to see the famous cherry blossoms and eat as much ramen as possible.

This publication once used the term “indefatigable” to describe my mentor, Larry Mackey. And after a quick Google search for the definition, I had to laugh at how on-point that is. “Persisting tirelessly.” That’s how Larry works up each case, and it’s why so many of his clients obtain very favorable results. And it’s also how he expects people who work for him to approach each case. We spend a lot of nights and weekends in the office together, but the example he sets has been invaluable to my career and to me learning how to be an effective, professional and respected white-collar defense attorney.

As I mentioned, I really have wanted to be an attorney since grade school. If I had to choose again, I’d still be an attorney. But I love cooking and think I would enjoy the life of a chef.

I came to Barnes with the goal of becoming a capital partner, and that remains my goal today. In 10 years, I see myself at Barnes with a successful white-collar defense practice. And unless Katie Matsoukas, who is one of my other mentors, wants it first, I’m aiming to take Larry’s corner office! Actually, as I read that back to myself, I’m pretty sure Larry will still be in there working.

Most of my friends and family know, but it’s too wonderful not to mention. Jenai and I are having a baby girl! She’s due at the end of July and we couldn’t be more excited.

I did not have a lot of guidance in undergrad (Purdue is the only Big Ten school without a traditional law school), so I enjoy mentoring young people who are considering law school. Going to law school requires a substantial commitment of time and resources, and too often people seem to make that commitment without really understanding what being a lawyer means. My number one piece of advice is to have lunch or coffee with as many attorneys as possible before committing to attending law school. Find out what options are available to licensed attorneys and, if possible, shadow a few to get a sense of what a day in the life looks like. Whatever you do, don’t go to law school just because you don’t know what else to do. I always wanted to be a lawyer and love what I do — as do most lawyers I know. But be sure you think it’s for you before committing to a life as a lawyer.

As a litigator, what’s a key thing you’ve learned since your first trial?

Always work to be the most prepared person in the room. For trial, that means preparing the other side’s arguments, too. Write the key government witness’ direct before you write the cross. After you write your cross, think through the government’s objections so you can prepare your responses and/or improve your questions. Write the government’s closing and rebuttal before you write your closing. And so on. Unexpected rulings, answers and other surprises are certain to happen over the course of a complicated white-collar trial. But you can significantly limit surprises by putting in the extra work on the front end.

What are some essential traits for a white-collar defense lawyer?

Attention to detail. Hard-working. Determination. White-collar cases often involve complex facts and multi-year investigations. It is crucial for defense lawyers to do the deep dive to fully understand and master the facts in order to best serve our clients. By way of example, one of our Japanese corporate clients received a grand jury subpoena the month I was sworn in as an attorney. Four years, a half-dozen trips to Japan and a month-long jury trial later, our client was acquitted of all charges by a federal jury. The vast amount of information, interview memos and documents would have been overwhelming and unusable if we hadn’t kept track of every detail in an organized and tactical manner. These cases can quickly get away from you if they aren’t managed correctly from the start. And that leads to my answer to the next question.

A large part of my practice is representing clients who have had their businesses or homes raided by the federal government or who have received a federal grand jury subpoena. In these pre-indictment situations, we work with the primary goal of convincing the government the client should not be prosecuted. That result typically doesn’t make the papers, but it is extremely rewarding to have a client tell you that you saved their company or their livelihood.•