Kelleigh Fagan had a plan out of law school to pursue a sports law practice, and she went for it. As a result, her practice has developed a national reputation, assisting colleges and universities across the country with NCAA compliance. She also helped the Noblesville Boys & Girls Club open a new facility by providing pro bono services for its capital campaign. Her peers say that in her practice and her service, Fagan has done in six years what many others would take decades to accomplish. 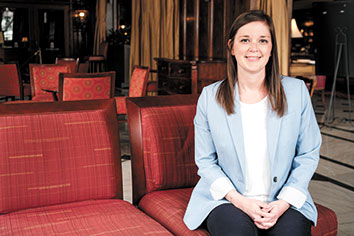 You set your sights on sports law and quickly built a practice. How did you do that?

With the help and support of a lot of people and many hours of hard work.  When I started at CCHA, I told two of the senior partners there that I wanted to start a sports law practice that represented universities that were being investigated by the NCAA. They promised me their support, and the firm has more than come through with that promise. After spending time at the NCAA between undergrad and law school, I reconnected with Julie Roe Lach, who was at the NCAA when I was there. Together we started making the practice a reality and have had the opportunity to represent colleges, athletic administrators and student-athletes in various NCAA matters.

Would you advise other young lawyers to focus on a specialized practice?

I started in our business law section and still spend some of my time working with our business clients. I think it’s valuable to start without a specialty when a young lawyer first starts practicing and then move into a specialty as his or her career develops. But having an idea from the beginning of an area in which you want to practice can help you get there quicker.

Bruce Hitchcock was my government and history teacher at Noblesville High School. He taught history and the law in such a fascinating way that I wanted to practice law since taking his classes.

What was it like to be part of building the Noblesville Boys & Girls Club’s new facility?

I joined the board in the middle of the capital campaign, so a lot of the hard work was already done! It was a humbling experience, though, to realize the generosity of the community where I was raised and for a Club that I spent a lot of time at as a kid. The new building is incredible and serves so many kids and families in Hamilton County.

Being with my family and friends is really all I need. Weekends and evenings with my son is precious time and the best part of my week.

The people I work with and the intellectually challenging work. Our sports law team happens to be all female, which is unique in any sports industry. It is rewarding to work with such a talented group and to solve difficult problems for our clients.

I have been lucky enough to have many people I have looked up to as mentors throughout my life — teachers, bosses and friends. My parents, sisters and husband have always been constant, though, and believed in me no matter what. Pretty much everything valuable I have learned is from those five people.

Hopefully our sports law practice continues to grow and I’m doing pretty much the same thing that I am doing now!

Too many to count, but hopefully our lawmakers can work together one day to change those that cause harm to disadvantaged groups.

I’ve watched every episode of “The West Wing” too many times to count — maybe another I reason I ended up in the law.

Surround yourself with people you enjoy being around and who will push you to have to be at your best every day and you’ll be satisfied with a legal career.

Something in sports. Possibly more on the management or business side of it.•