Home » Hammerle on… “Shazam!,” “The Best of Enemies” and “Pet Sematary”

“Shazam!” is a film about and for teenagers. From an adult perspective, it is saved by focusing on the struggles of kids living in a foster home, but that simply makes the experience semi-tolerable. 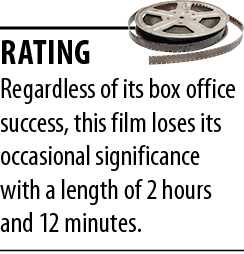 The film begins in the same fashion as “Us.” Once again, we find a young child at an amusement park who experiences a trauma that changes his life. Here, the child becomes separated from his mother while looking for a prize after dropping it in a large crowd. The film then jumps to years later where a 14-year-old is still trying to find Mommy.

The boy is played by Asher Angel, and for reasons that never become clear he finds himself venturing into an underworld cave occupied by a wizard known simply as Wizard (an unrecognizable Djimon Hounsou). Angel’s character, known as Billy Batson, is given a magical shaft where he transforms into an adult superhero by simply saying the word “shazam.” As Billy wrestles with his new existence, the strength of the film flows from his friendship with Freddy (Jack Dylan Grazer), a smart school comrade who walks with a cane. When Freddy becomes the target of bullies, Billy begins to discover his purpose in life.

In the process, Billy joins Freddy with other teenagers at a foster home run by Victor (Cooper Andrews) and Rosa Vasquez (Marta Milans). All the other kids in the foster home are trying to wrestle with their purpose in life, and Faithe Herman stands out as the pugnacious 8-year-old, Darla.

While this could have been an interesting film had it simply concentrated on the lives of these young kids, it proceeded to confirm my suspicions after watching the sophomoric trailer. When Billy becomes a superhero, he is left constantly trying to understand his strengths. While it is at times funny, I suspect you will find it to be a bit tiresome.

A large portion of this mediocre film deals with Shazam’s (played tolerably by Zachary Levi) battle with a villain known as Dr. Sivana and his underworld monsters. While their midair battles result with Shazam repeatedly being thrown to the ground, Mark Strong brings some emotional strength to the movie in his role as Sivana.

Pedestrian at best, you need to see “Shazam” with teenagers. It reaffirms their existence.

“The Best of Enemies”

Agree with me or not, I consider Sam Rockwell to be the most provocative actor working today. His Oscar-winning role in “Three Billboards Outside Ebbing, Missouri” (2017) and nomination in last year’s “Vice” are memorable, but his sensational contribution to “The Way Way Back” (2013) and his role as a sex addict working in a Revolutionary War tourist attraction on the East Coast in “Choke” (2008) establish him as one of Hollywood’s brightest stars. 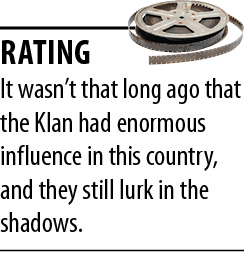 Here, Rockwell plays opposite Taraji P. Henson in a re-creation of the racial battle engulfing Durham, North Carolina, in 1971. Rockwell plays C.P. Ellis, a Ku Klux Klan leader who ends up in a public debate with Henson’s Ann Atwater, a take-no-prisoners civil-rights activist. Initially hating each other, they are slowly drawn together in a film that gives us all a history lesson on racial discrimination in our country.

The film pulls no punches, and Rockwell’s Ellis commonly uses the “n-word” publicly as well as in private. When a school housing black children is severely damaged in a fire, a controversy emerges on whether black and white children should be permitted to go to the same school. The Klan views this as an easy answer, and here is where Henson’s Atwater captures everyone’s attention.

With Durham divided, a program is formed called a charette to debate this issue publicly, where six members on each side of the argument are made a part of a panel. Babou Ceesay is perfect playing Bill Riddick, an out-of-state organizer who has conducted charettes before. It is fascinating to watch how harsh arguments are vocalized as six black community members sit to his left and six white local activists sit to his right at the table.

Rockwell is marvelous at all times, particularly interacting with his wife Mary, played in an earnest fashion by Anne Heche. The fact that they have a severely emotionally and mentally damaged young son eventually serves as a bridge that he is forced to cross when Atwater comes to his assistance concerning the treatment of his child.

While Henson at all times holds your attention, she is so angry and vocal in nearly every scene that you begin to understand why many people, including supporters, develop a bit of dread when she arrives. However, Henson in the end demonstrates the talent she showed in “Hidden Figures” (2016) when she reaches the point of deciding the Klan leader needed to be talked to whether you condemn his stance or not.

See this film. It won’t waste your time.

If you want to quickly see the plot of this movie, simply watch the trailer. Speeding semis pass on a country road in front of a house in Maine, and you know nothing good can result with a young girl wandering in its vicinity. 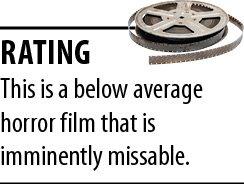 In summary fashion, Louis and Rachel Creed (Jason Clarke and Amy Seimetz) move with their two children from Boston to a rural home in Maine. As noted above, despite this being a country setting, a two-lane road runs in front of their home where semis roar by at incredible speeds.

The family quickly discovers a pet cemetery where locals march wearing ludicrous cat masks to bury an animal. When the Creeds’ cat is killed by a semi, Dad seeks a way to tell his daughter when he receives incredible information from Jud Crandall (John Lithgow), a reclusive neighbor, that he needs to bury the cat in a strange location beyond the cemetery. Told that this location somehow results in the dead coming back to life, the Creeds are astonished to find their cat reappearing in the home.

However, it quickly becomes evident this cat is now one nasty animal, and I won’t say any more other than to warn you of what happens in this film when the Creeds’ daughter Ellie is struck and killed by a truck. Guess where Dad is going to bury her?

My niece is a movie fan and told me in advance that this film was saved by a surprise ending. However, I must respectfully disagree, as nothing happens that is remotely unpredictable.

I respect the talent of Jason Clarke, an Australian film star who has already made his mark in several movies. As an example, take the time to watch “Rabbit-Proof Fence” (2002), “Zero Dark Thirty” (2012), “Dawn of the Planet of the Apes” (2014), last year’s “First Man” and his role as Ted Kennedy in “Chappaquiddick” (2017). While even he, along with Lithgow, cannot save “Pet Sematary,” they make it mildly tolerable.

There is an old saying, “Let the dead bury the dead.” It’s unfortunate that “Pet Sematary” did not provide a place to bury misguided films along with animals. On the other hand, this movie is a rehash of the original, so who knows?•