“Avengers: Endgame” is likely to be the highest grossing film in history, and it deserves that honor. However, before going further, let me address an important issue concerning bathrooms that many of you will face in a movie that lasts 3 hours and 1 minute. It may not be as long as “Gone with the Wind” (1939, 3 hours, 58 minutes), “Lawrence of Arabia” (1962, 3 hours, 48 minutes) or “Gandhi” (1982, 3 hours, 11 minutes), but when nature calls, you must oblige. 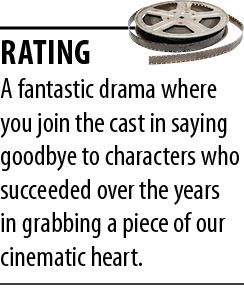 In any event, I had a friend send me a column from a guy who made a valuable recommendation, particularly for aging male patrons. He simply said that while there is not a bad scene in this film, look to hit the head 44 minutes into the movie when a scene flashes to Tokyo in a rainstorm. Dialogue takes place that lasts for four minutes, and you can easily get back to your seat and miss nothing significant. After advising a laughing young couple sitting next to me of my game plan, the female elbowed me when the rainstorm appeared onscreen and whispered, “Your time has come!”

While there is no way that it would be fair to identify which of our heroes live or die, I have not seen any movie rival the conclusion of “Avengers” since the last film in the “Lord of the Rings” trilogy. If you recall, everyone on screen had to say goodbye to Frodo Baggins when he was forced to sail with Gandalf to another dimension given that he was poisoned by his close contact with the ring. You will experience the same thing during the last third of this film, when important characters embrace a moment when you feel that they are saying farewell to one another and the audience.

Ironically, directors Anthony and Joe Russo’s film actually involves a simplistic plot that increases the tension felt both onscreen and off. Many “Avengers” characters died when Thanos (Josh Brolin) obtained all six Infinity Stones in “Avengers: Infinity War,” which allowed him to destroy half of the population in the universe. The survivors, Captain America (Chris Evans), Iron Man (Robert Downey Jr.), Black Widow (Scarlett Johansson), Hulk (Mark Ruffalo) Thor (Chris Hemsworth), Hawkeye (Jeremy Renner), Ant-Man (Paul Rudd) and Nebula (Karen Gillan) unite to find a way into the past where they can confront Thanos and hopefully restore their dead comrades to the living.

Though there is not a bad performance in the film, Robert Downey Jr., Chris Hemsworth and Mark Ruffalo are memorable for different reasons. Iron Man has now started a new life where he is married (Gwyenth Paltrow as Pepper Potts) with a devoted daughter, and he knows that joining the Avengers’ journey into the past may result in his never being able to return to a family he loves.

As for Hemsworth, he is funny beyond words playing an incredibly obese, laconic Thor whose only remaining desire is to make sure he can find a cold beer. Hemsworth dominates the screen with his magical performance, and it helps make this movie an incredible artistic success.

Yet Ruffalo’s Hulk is a central character in this remarkable movie. Bruce Banner has now merged into his alter ego, resulting in the Hulk becoming a thoughtful, eyeglass-wearing leader no longer angry at the world.

Ironically, while there are expected battle scenes, this film actually devotes itself to exploring the meaning of friendship and love. It allows you to embrace a multitude of characters ranging from Don Cheadle as The War Machine, Benedict Cumberbatch as Doctor Strange, Chadwick Boseman as the Black Panther, Brie Larson as Captain Marvel, Tom Holland as Spider-Man, Zoe Saladana as Gamora and Anthony Mackie as the Falcon, among others. And as expected, Bradley Cooper’s Rocket Raccoon adds icing to this cinematic cake.

The net effect by the Russo brothers is to paint a cinematic canvas that will go down in history as one of most monumental, emotional films ever made.

Given the unsettling nature of American politics today, it is wise to explore significant moments of our immediate past. Director Patrick Creadon’s “Hesburgh” accomplishes that goal with this superb documentary that explores Rev. Theodore Hesburgh’s 35 years as president of the University of Notre Dame and his dedication to elevating the life of average people. He employed both booze and fishing as inventive mechanisms to reach a compromise with friends and opponents. 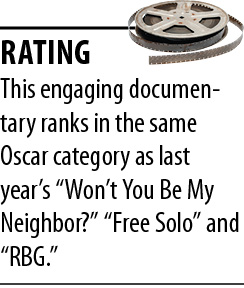 Hesburgh was a Catholic priest who brought dignity to a religion that has become embroiled in scandal and controversy. In the process, he served as counsel to presidents ranging from Eisenhower to Johnson and advised Pope Paul VI on the reforms embraced by Vatican II. Ironically, despite the fact that his service to the public took him away from Notre Dame close to 50 percent of the time, Hesburgh still was able to raise the reputation of the university by expanding both its endowments and the number of students, including females, attending class.

While enormously entertaining, this film serves as an educational tool by exploring Hesburgh’s accomplishments. Though he served on many national boards, which included the Rockefeller Foundation, none was more important than the leadership he displayed that resulted in President Johnson signing both the historic Civil Rights Act and Voting Rights Act in 1964 and 1965. Hesburgh had served on the U.S. Civil Rights Commission since being appointed by President Eisenhower, and he championed the cause of African-Americans living in the Deep South who suffered horrific discrimination. In that regard, it is worth remembering this famous Hesburgh quote:

“The melting pot failed to function in one crucial area. Religions and nationalities, however different, generally learn to live together, even to grow together in America. But color was something else. The blacks, who did not come here willingly, are now, more than a century after emancipation by Lincoln, still suffering a host of slave-like inequalities.”

While the film demonstrates Hesburgh’s incredible strengths, it does not dodge his mistakes. With Nixon president and Vietnam War protests taking place on nearly every major college campus in the late 1960s, Hesburgh foolishly imposed a program at Notre Dame where any protester who failed to disburse in 15 minutes would be subject to action that could result in their expulsion from the university. In doing so, Hesburgh ignored the tragedy that took place at Kent State University while receiving congratulations from a president whose policies he strongly opposed.

Nonetheless, the thing that I personally will remember most about the documentary is Hesburgh’s decision to attend a speech by Martin Luther King Jr. in Chicago in 1964, where they ended up holding hands with others as they sang “We Shall Overcome.” He did so despite facing threats to his safety, and his courage should never be forgotten.

He was truly a man for all seasons.•