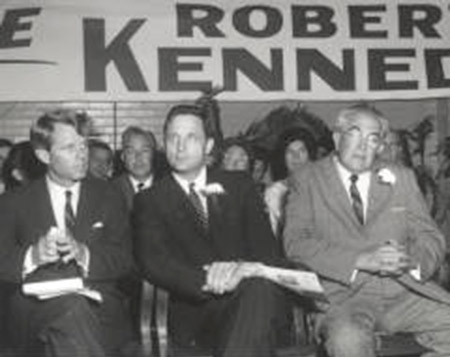 On the car ride over to the Leadership Conference on Civil Rights that was convening in Washington, D.C., in the spring of 1970, Sen. Birch Bayh was adamant that he did not want to tangle with the Nixon administration again over another nominee to the U.S. Supreme Court.

But Judge G. Harrold Carswell of the 5th Circuit Court of Appeals was drawing opposition from civil rights groups and the legal profession. He espoused racist views — once declaring he had a “vigorous belief in the principles of white supremacy” — and a review of his judicial career revealed he had been reversed more than any judge in the United States.

Bayh was also opposed to Carswell’s nomination. However, he was reluctant to become a leader in the fight against confirmation because he had just been the point person in the opposition that ultimately derailed the administration’s previous Supreme Court nominee, Judge Clement Haynsworth of the 4th Circuit Court of Appeals.

Consequently, the Indiana senator was agonizing in the car. Behind the wheel was Robert Blaemire, a George Washington University undergraduate who had been tasked with being Bayh’s driver. He listened on the way to the conference and then watched as the senator abandoned his prepared remarks on the Voting Rights Act to rally the crowd with the declaration that Carswell “had to be defeated.”

The mood was markedly different on the return trip to Capitol Hill. Blaemire remembered Bayh telling him, “I think we can win this thing.”

For 13 years, starting shortly after he had arrived from Hammond to begin his studies at GW until the 1980 election, Blaemire worked for Bayh. He began logging precinct vote totals onto computer forms, then got promoted to driver. After earning his bachelor’s degree, Blaemire remained on Bayh’s staff, serving as office manager, working on the Senate as well as the 1972 and 1976 presidential bids, then getting elevated to chief political adviser. 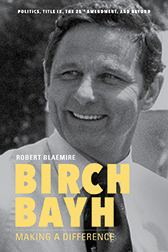 Their working relationship ended with Bayh’s defeat in the Reagan landslide, but their friendship continued. In 2012, Blaemire began videotaping interviews with the senator, talking about his time in public office. Those conversations became the basis of Blaemire’s biography just published by Indiana University Press, “Birch Bayh: Making a Difference.”

The book’s release is bittersweet. It is a well-researched and engaging recounting of Bayh’s public life, but it comes just weeks after the senator died at the age of 91.

A memorial service was held May 1 at the Indiana Statehouse, the place where Bayh began his political career. Former staffers, lawmakers, state and federal court judges, friends and family gathered in the south atrium to remember the senator, from his love of ice cream to his achievements in Washington.

The ceremony came days after former Indiana Sen. Richard Lugar died at age 87. Bayh beat Lugar in the 1974 Senate campaign, but when the latter joined the upper chamber after winning the 1976 election, the pair worked together as colleagues and became close friends.

“I think they’re both examples of how the system can work,” Blaemire said of Bayh and Lugar, “of how civility is important, how reaching across the aisle (is important) and how compromise is not a dirty word.”

Bayh’s accomplishments in public life have been well-documented.

The Hoosier was the principal architect of two constitutional amendments — the 25th and 26th — a feat no other American has accomplished since James Madison. He also was the Senate’s principal sponsor of the Equal Rights Amendment, and when the push to ratify that provision was faltering, he slipped 37 words, barring discrimination against women in the classroom, into the Higher Education Act of 1972.

That new section, which became known as Title IX, has been viewed as Bayh’s most lasting achievement. Blaemire said the language was inserted with little opposition because, frankly, nobody noticed. Nixon signed the act into law, and no one realized the monumental change contained within until people started using Title IX to sue for access.

Speaking at the memorial service, Chief Judge Jane Magnus-Stinson of the Southern Indiana District Court summed up Bayh’s political philosophy as, “If you see something, do something.” He saw the problem of inequality for women in education, Magnus-Stinson said, and he acted.

“American girls and women will forever share the legacy of Title IX forged by the will, the wile and the wisdom of Sen. Birch Bayh,” she said.

Bayh’s opposition to the two Supreme Court nominees, Haynsworth and Carswell, reflected his sense of fairness and equality. He had voted for the Civil Rights Act of 1964 and for the Voting Rights Act of 1965, and within his own staff, Blaemire said, he promoted the most qualified individuals without regard to their gender or race.

Rep. Andre Carson, D-Indianapolis, told the crowd at the memorial service that the senator was a loyal and dedicated friend to the African-American community. He was a strong voice, Carson said, and he regularly elevated minorities to positions of power on Capitol Hill and throughout all of the federal government to ensure people of color did not remain on the sidelines.

“Birch Bayh, a white man from the state that was once the epicenter of the Ku Klux Klan, fought discrimination in the halls of Congress with every fiber of his being,” Carson said.

When Haynsworth was put forward to fill the vacancy on the Supreme Court created by the resignation of Abe Fortas, Bayh did not immediately oppose the nomination.

Still, concerns were rising because Haynsworth seemed to have violated conflict of interest rules by deciding cases involving companies in which he held a financial interest. At the confirmation hearings, Bayh repeatedly gave the judge the opportunity to say he should have recused himself, but Haynsworth kept insisting, “I haven’t done anything wrong.”

According to Blaemire, if the judge had made the admission, he would have likely been confirmed. However, Republicans defected, and the nominee was kept off the bench by a 55-45 vote.

The nomination of Carswell fulfilled a warning issued by Sen. J. William Fulbright. During the Haynsworth debate, the Arkansas senator told his Indiana colleague how Nixon would react if his nominee was defeated.

“If you beat this guy,” Fulbright said, “the next guy is going to be worse.”

Bayh was uncertain the effort to derail the Carswell nomination could muster any more than 25 votes, but he felt he had to try. His effort was given a boost by a group of Yale Law students whose research of Carswell’s judicial record stirred questions about his competence. Also, the opposition spread when Carswell was found to have lied to the Senate about his work in protecting the whites-only status of a golf course.

The galleries filled and Vice President Spiro Agnew took his seat as presiding officer when the Carswell vote came. By the end of the roll call, the nomination was losing 46-44, but six senators had yet to vote. Five of them cast “no” ballots, sinking the confirmation.

Back home where Nixon was a favorite, Hoosiers were not pleased with Bayh’s role in derailing Carswell. As he rode around the track at the Indianapolis 500 weeks after the vote, he was roundly booed. Bayh took it in stride, telling Blaemire, “You haven’t lived until you’ve been booed for a third of a mile.”•