I have been thinking about leadership in the wake of the recent death of Senator Richard Lugar. Why are leaders so important? They inspire, challenge and motivate us. They have traits that we admire and hope to emulate. Senator Lugar, for example, exuded intelligence and empathy, an understanding of both sides of issues that dignified rather than denigrated the decision-making process. As lawyers, we are called to be leaders within our own law firms, with our clients, families, boards and organizations. The manner in which we address and resolve problems are magnified because we, as officers of the court, have all taken an oath, which includes the following: “I will abstain from offensive personality and advance no fact prejudicial to the honor or reputation of a party or witness, unless required by the justice of the cause with which I am charged.” The leaders I most admire have conducted themselves with this dignity, and one of the reasons I held Senator Lugar in such high regard was his ability to disagree while maintaining respect for those with whom he disagreed.

I first met Senator Lugar when I was 10 years old in 1967. He was a candidate for Mayor of Indianapolis and he visited my fifth grade classroom. He left a lasting impression. I do not recall what he said but I was so moved (with all my 10-year-old experience in politics) that I pulled out a 3×5 index card and asked for, and received, his autograph. I still treasure it today and keep it with my 1971 autographed photo of Dick Butkus (a leader of a different sort). As I grew older I came to appreciate just how many momentous local and national accomplishments Senator Lugar achieved, and of equal importance, how he conducted himself as a leader – always above the fray. Rather than seek the financial rewards made possible through his stellar academic and military credentials, Senator Lugar devoted his life to improving the lives of others. 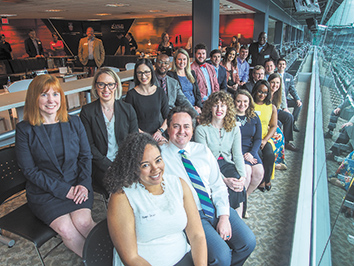 From the beginning of our nation, leadership has been necessary but not easy. We have all been taught the many lasting virtues of our first leader, George Washington, but few focus on the fact that he actually had to borrow money to travel to, and attend his own inauguration. He did not want to serve a second term but did so only to preserve a fragile nation from fracturing over vitriolic disputes between parties led by Jefferson and Hamilton. It might be said that the leaders who have contributed the most have done so at great personal sacrifice.

Within our legal profession, we are led and inspired by attorneys who dedicate precious time to foster personal relationships and see the larger picture, and I am so impressed with our past and upcoming leaders. Sixteen years ago, the IndyBar began a leadership program known as the Bar Leaders Series. The members of that task force showed foresight and have greatly contributed to our profession and community through each Bar Leader Series class. When I discovered that one of the founders and first instructors was an attorney in one of my present cases, serving as opposing counsel, I was impressed and hold him in higher regard for that service. The series has produced attorneys who have excelled as leaders in private practice, government positions and non-traditional law. James Bell, our immediate past president (Class II), Nissa Ricafort (Class III) another past president, and future presidents Jimmie McMillian and Andy Campbell are also graduates. 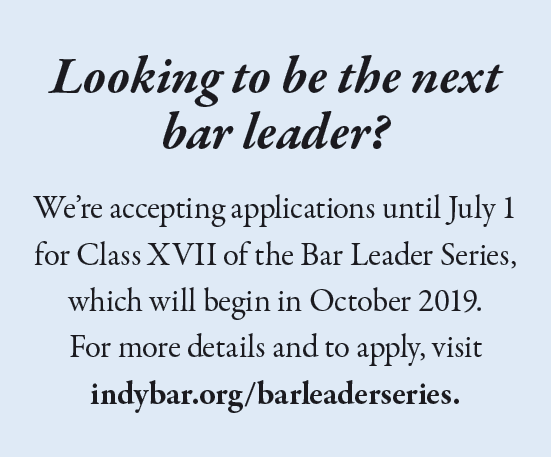 For example, one Class XVI graduate, Bryan Stoffel, already has been featured in a Fox59 News story for his extensive volunteer efforts to “pay it forward.” The story featured Bryan providing free legal advice through the IndyBar’s Ask a Lawyer program and highlighted his service in the Free Wills Clinic and as co-chair of Legal Line. Our profession needs more leaders like Bryan, and the Bar Leader Series Steering Committee has done an outstanding job in selecting these future leaders in a very competitive process.

Our committee, chaired by IndyBar President-Elect Jimmie McMillan, contains some of our most notable judges and attorneys, and our current members are Judge Robert Altice, Sonia Arnold, Kiamesha Colom, Bernice Corley, Representative Ed DeLaney, Lakshmi Hasanadka, Kelley Johnson, Judge Timothy Oakes, Magistrate Judge Doris Pryor, Nissa Ricafort, Shaunestte Terrell, Nabeela Virjee and Judge Tanya Walton Pratt. The time and dedication of these judges and attorneys is greatly appreciated and will be measured to some degree by the current and future successes of Class XVI, which I predict will be significant.

As we remember the late Senator Lugar and take stock of the impact his leadership has had on our lives, I have an even greater appreciation for the above judges and attorneys who have laid the foundation for the type of positive leadership that will bear fruit for years to come.•