A film title that will likely alienate a large number of movie fans, with “Hail Satan?” director Penny Lane has brought to the screen a stunning mockumentary that will both challenge and entertain you. If there was an Oscar award in a category entitled “Who Would Have Thought This Was Possible?” this film would win, hands down.

Known as the Satanic Temple and founded in 2013 by an engaging Lucien Greaves, Satan was used as a method to challenge our government’s gradual use of God in a fashion that resembles Sharia Law in many Muslim countries. Despite the fact that separation of church and state is a bedrock principle embraced by our Founding Fathers, we have gradually allowed religious influence since the 1950s to result in the phrase “In God We Trust” appearing on our U.S. currency, the addition of “One nation, under God” to our Pledge of Allegiance, and the accepted standard of “So help me God” becoming part of oaths that all Americans must take in many courts of law. 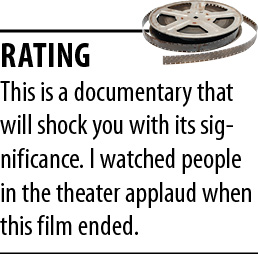 Centering his highly criticized religion in Salem, Massachusetts (for reasons that are all too obvious), Greaves’ first act was to hold a press conference in 2013 in which he praised Florida Gov. Rick Scott’s argument that prayer should be used in public schools. In doing so, Greaves was actually mocking the governor, arguing this policy opened the door to also require Satanic religious teachings in our schools.

But Greaves and his loyalists didn’t stop there. Holding press conferences where some of them actually wore thorns attached to their heads, they moved to Arkansas to challenge the state government’s erection of a Ten Commandments monument on government property. He vociferously and rightfully argued that if the Ten Commandments monument was to be built, then it was required that his 7-foot monument depicting the goat-headed Baphomet with two young children also be installed.

While the value of this film centers on the Satanic Temple’s attempt to fight the religious assault on church-state separation as noted above, director Lane also took the time to review the treatment of the devil over the centuries. There are several incredibly funny scenes, particularly one where you watch the devil approach Jesus during his 40-day fasting trip through the desert. In that regard, a member of the Satanic Temple found fault with criticizing the devil for offering water to Jesus as nothing more than “a temptation.” Among other things, he noted it was unfair to condemn anyone under these circumstances. After all, wouldn’t you criticize any person who simply passed by a struggling person alone on sand dunes and let him die of thirst?

You will also see that the Satanic Temple has its own version of the Ten Commandments, known as the Seven Tenets. They begin with the admonition, “One should strive to act with compassion and empathy towards all creatures in accordance with reason.” Quite frankly, this made the devil worshippers sound more religiously dedicated than the powerful Catholic Church that has for decades harbored child molesters who were allegedly serving God.

The power of Lane’s film should appeal to all of those who respect our Constitution, as it focuses on how our Supreme Court’s Hobby Lobby decision permitted organizations to deny insurance coverage for contraceptives if members opposed it based upon religious reasons. The film’s genius is seen with it pointing a cinematic finger at how our country is gradually allowing constitutionally protected rights such as abortion, gay marriage and vaccines to be interfered with by decisions based solely on religious beliefs.

If the separation of church and state means anything, then people in the business of selling pastries cannot refuse service to a gay married couple. The same thing is true for high schools such as Roncalli in Indianapolis that attempt to fire gay, married employees on religious grounds. If that is your religious belief, fine. But then get out of the pie business and stop operating allegedly religious-based schools that take state and federal taxpayer money.

Finally, I noticed our vice president gave a speech at Taylor University where he urged students to embrace Christianity while conveniently ignoring our Constitution. I’m sure God was smiling as a number of students walked out in protest.

“John Wick: Chapter 3 – Parabellum” is one of the most entertaining, god-awful films to ever hit the big screen. Imagine going to a ballet where the dancers use innovative techniques to literally pummel each other to death as they danced, leaped and swirled across the stage for roughly two hours.

This movie reminded me of one of my favorite phrases, “I hate myself for loving you.” Keanu Reeves is back as John Wick, a legendary killer who has been booted out of an international assassins’ organization for killing a member against the team’s rules. He now has a $14 million bounty on his head, and many nasty characters are after him from the moment the film begins. 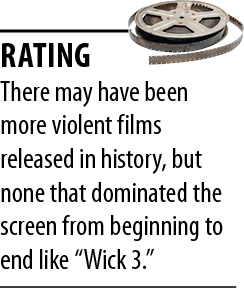 My apologies, as I’ve just described the entire plot of this film. In a sense, Reeves’ Wick resembles Superman with long, wet hair. His face constantly covered with blood, Wick is repeatedly shot and stabbed. In addition, wait until you see the fights in various museums where Wick is repeatedly thrown through glass cases protecting works of art. Fortunately, the would-be killers are terrible shots even when using machine guns, and you know that Superman can take a licking but his heart will keep on ticking.

Interestingly, what you’ll likely find attracting your interest is a wonderful soundtrack that converts the film into more of a work of art than a traditional movie. That is helped by the appearance of numerous heavily tattooed women in secondary roles. In addition, refusing to use a double, Reeves does all of his stunts as Tom Cruise did in the last “Mission: Impossible” movie.

While the film largely centers on John Wick alone, it is helped by smaller performances from Halle Berry, Laurence Fishburne, Ian McShane and Anjelica Huston. Berry plays against type as an old friend of Wick’s who becomes involved in a massive fight as they try to escape with their lives. However, it is McShane who will capture your attention as he once again finds a way to elevate a film with his style, eloquence and dark sense of humor. His role here as Winston, the manager of The Continental Hotel that is usually off-limits to violence, reminded me of his legendary performance as Al Swearengen in the magnificent “Deadwood” series (2004-2006).

Finally, it is clear that a fourth chapter centering on Wick’s attempt to live will hit the screen in the future. As you try to suppress your anxiety, don’t forget to watch the film entitled “Deadwood,” which will be released on HBO May 31. That series will finally be given a deserving conclusion, which it had been unfairly denied.•