The legal and moral questions surrounding abortion have long divided the country, but in recent months the rift between pro- and anti-abortion rights advocates has ripped wide open as state legislatures and federal courts grapple with a surge of laws restricting abortion access.

Indiana has been at the center of the recent controversy, with the United States Supreme Court issuing a per curiam opinion partially upholding a 2016 Hoosier law. Last month’s ruling in Kristina Box, Commissioner, Indiana Department of Health, et al. v. Planned Parenthood of Indiana and Kentucky, et al., 587 U.S. ___(2019), was a partial victory for anti-abortion groups, and the decision seems to have buoyed their optimism that Roe v. Wade might one day be overturned.

A growing number of states passed legislation in 2019 that would limit legal abortions. In some instances, laws would nearly prohibit abortion procedures. The strategy, abortion-rights advocates say, seems to be to repeatedly ask the Supreme Court to outlaw abortions and hope a conservative-leaning majority will soon agree.

The question becomes, when, and whether, the Supreme Court will take a case that could seriously undermine Roe. While there is hope among anti-abortion advocates that Roe will soon be overturned, attorneys who handle abortion-related cases, even those who oppose abortion, say that if the court were to roll back its abortion precedent, it will be a slow, unpredictable process. 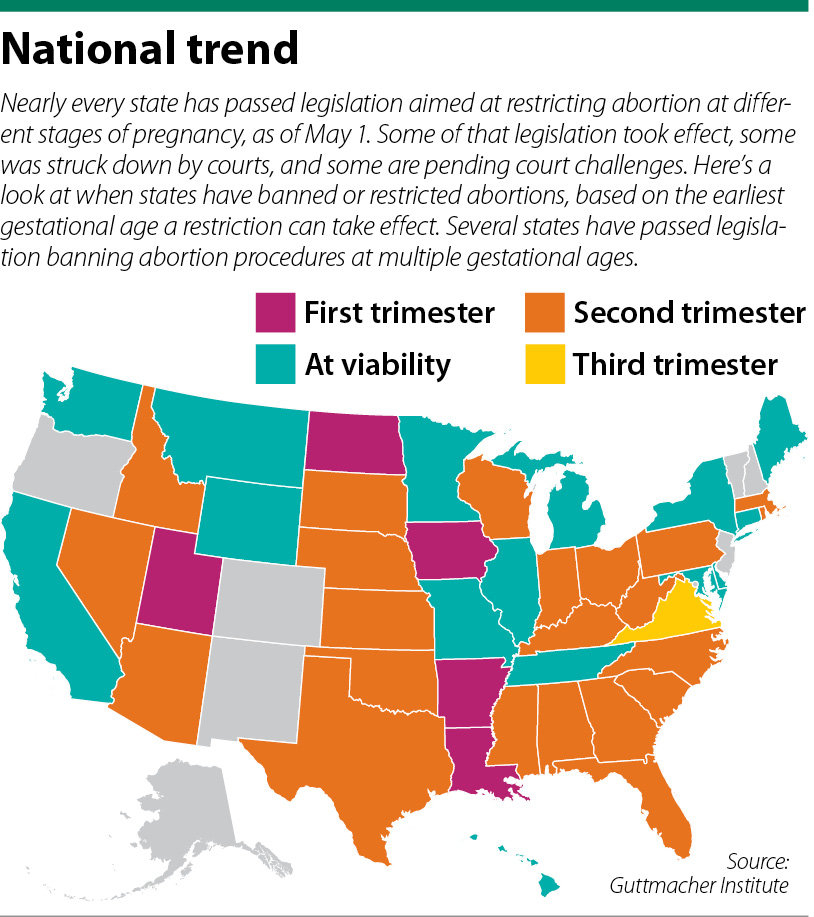 The May 28 Box ruling addressed two issues of the 2016 version of House Enrolled Act 1337: a provision requiring fetal remains to be either buried or cremated, and a provision prohibiting abortions based on the race, gender or genetic abnormality of the fetus.

A 7-2 court upheld the former and denied cert to the latter, which was blocked by lower courts, delivering a small win for both sides of the debate. In upholding the fetal disposition provision, the majority said the 7th Circuit Court of Appeals “clearly erred” in determining the state did not have an interest in the disposal of fetal remains.

Jim Bopp, a Terre Haute attorney known for his work on conservative litigation, called that ruling “important,” saying the 7th Circuit’s interpretation of Roe — specifically, the holding that fetuses are not “persons” under the 14th Amendment — was an overly broad reading of the case.

“To say, ‘You cannot treat the unborn as human for any purpose’ would be a terrible expansion of Roe v. Wade into other areas of the law,” Bopp said.

But Wanda Savala, public affairs manager of Planned Parenthood of Indiana and Kentucky, said the fetal remains provision of HEA 1337 is meant to shame women who have had or are seeking abortions by forcing them to discuss the disposition of their aborted fetuses with their doctors. Though that provision has not yet taken effect — and though additional litigation on the provision seems likely — PPINK has said the fetal disposition law, once in effect, could increase the cost of abortions in Indiana.

But the Box case is not the only abortion litigation rooted in a Hoosier law. Earlier this month, Indiana Southern District Senior Judge Sarah Evans Barker issued a preliminary injunction allowing Whole Woman’s Health to open an abortion clinic in South Bend without a state-required license. Indiana Attorney General Curtis Hill has appealed that ruling to the 7th Circuit and is seeking a stay.

Also in the Southern District, Barker heard arguments earlier this month on the 2019 House Enrolled Act 1211, which would ban the most common form of second-trimester abortions — dilation and evacuation abortions — unless the mother’s health is in peril. The American Civil Liberties Union of Indiana is seeking a preliminary injunction against HEA 1211.

Back at the U.S. Supreme Court, another provision of HEA 1337 requiring women to have an ultrasound at least 18 hours before an abortion has been listed for conference among the justices. That law first went before the high court in early May, but as of IL deadline, the court had not acted.

Indiana is often looked to as a model for other states passing bills restricting abortions, Savala said. The Hoosier state has a Republican legislative supermajority and is led by a Republican governor, she said, so it is able to pass abortion legislation that other states want to emulate.

But several states have passed laws banning abortions that are more restrictive than Hoosier law. Alabama, for example, passed legislation that would prohibit abortions in all cases except if a mother’s life is at risk or if the fetus cannot survive.

Georgia, Louisiana and Mississippi have likewise passed “heartbeat bills” banning abortion as soon as a fetal heartbeat is detected, usually around six weeks after conception. And in Missouri, a refusal to review an abortion clinic’s license meant the state’s only remaining clinic was nearly shut down.

Seema Mohapatra, an associate professor of law at Indiana University Robert H. McKinney School of Law who teaches health law courses, said the situation in Missouri highlights an important piece of the ongoing abortion debate: Roe doesn’t necessarily have to be overturned for abortion access to be limited.

If a federal judge had not issued a temporary restraining order, the Missouri abortion clinic would have closed. That kind of “chipping away” at abortion access is what Mohapatra expects will continue to happen as anti-abortion activists continue to work in legislatures and federal courts.

Bopp would like to see Roe overturned, but he said it would be foolish to predict how the justices will rule on the issue.

As a Supreme Court practitioner, Bopp said he’s learned that you never know what the court is thinking until the dust has settled. Right now, there’s a lot of dust surrounding abortion, and Bopp said it’s very difficult to predict what issues the justices might want to address.

If Roe were overturned, it would likely be because of a series of cases that slowly undermine the 1973 decision, Bopp said. He also said the composition of the court will be key, as enough justices have to have the appetite to address contested abortion issues.

Right now, Mohapatra said that appetite doesn’t seem to be there. In a lengthy Box concurrence, Justice Clarence Thomas seemed to be inviting lower courts and state legislatures to continue debating the issue, she said, but no other justices added their names to that opinion. That seems to indicate that right now, there are not enough justices interested in taking a close look at abortion precedent, she said.

Mohapatra thinks the justices will be more inclined to address the issue if there is a split among the lower courts. Indeed, the high court denied cert to the issue of abortions based on race, gender or genetic abnormality because only the 7th Circuit has considered such a provision.

Even so, Savala said Planned Parenthood and other abortion-rights organizations are receiving overwhelming support for their efforts to curb anti-abortion legislation. The concern among the public, she said, is that women will be forced to make dangerous medical decisions if their access to abortion is limited.

But the other side of the debate seems to be just as strong in their resolve. Numerous anti-abortion groups and advocates, including Vice President Mike Pence, issued statements praising the Supreme Court’s ruling on the fetal disposition law and vowed to continue fighting for similar legislation.

That split, experts say, won’t be resolved any time soon.

“If anything,” Mohapatra said, “with the composition of the court, I think we’re going to continue seeing these issues being litigated.”•