Home » Hammerle on… “Aladdin” and “Rocketman”

Given that I was not impressed by the film’s trailer, I sat down in my seat with minimal expectations. However, I must admit that I remain a big fan of director Guy Ritchie given several of his prior films that I loved, which include “Lock, Stock and Two Smoking Barrels” (1998), “Snatch” (2000), “RocknRolla” (2008) and the “Sherlock Holmes” films (2009 and 2011). This was reason enough to buy a ticket.

Regardless, “Aladdin” gradually developed an emotional power that resonated throughout the theater, and my skepticism soon disappeared. While Will Smith gives an unexpectedly captivating performance as the Genie who can grant three wishes, the movie’s power centers on several performances by lesser-known actors. That begins with memorable roles from Mena Massoud as Aladdin, Naomi Scott as Princess Jasmine, Nasim Pedrad as the princess’ aide Dalia and the unforgettable performance of Marwan Kenzari as the villain Jafar. 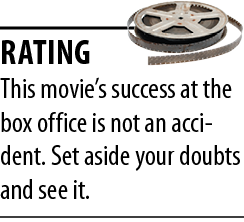 Starting with Massoud, his Aladdin is a street thief who survives with skill and cunning. This includes stealing a wristband after accidentally bumping into Princess Jasmine, and it is immediately apparent that the princess steals his heart. Subsequently captured by Jafar and forced to hunt down the lamp that contains the Genie, a series of incidents result in the Genie becoming his close friend.

Without saying more, Aladdin uses one of his wishes to be converted into a prince so that he can pursue a romantic relationship with Jasmine. As far as Scott’s Jasmine, it’s hard not to fall as much in love with her as did Aladdin. While she also remembers her encounter with Aladdin in the street, she concentrates her hopes on succeeding her father to become the first female sultan of Agrabah.

A struggle soon develops when Jafar seeks to gain control of the kingdom, and the reappearance of Aladdin as a prince along with the help of Smith’s Genie involves a confrontation that will easily hold your attention. It is here that Smith demonstrates his extraordinary talent as a magical character who demonstrates a comic genius that will leave you repeatedly laughing. And Pedrad’s Dalia matches Smith’s comic charm.

However, three unanticipated contributions make “Aladdin” a must-see film. While the first is Kenzari’s role as an evil villain who will leave you rooting against him from his first moment on screen, the other two creative roles come from Aladdin’s small monkey friend with the name Abu and Jafar’s wicked parrot. Abu provides needed help to Aladdin at every turn, while that blasted parrot may be the first bird to appear on screen that has absolutely no conscience.

Finally, though the music starts a bit slowly, there are a number of powerful songs in this film, the best coming from Jasmine and Aladdin. You will be surprised by their emotional impact.

While this is another movie that many critics have dismissed as being a lackluster recreation of the original animated film, it would be curious to hear their reaction given the general public has embraced this movie. In many ways these reviewers have become like TV weathermen who are proven to be wrong on many of their predictions. In the process, they are losing their credibility, given the legacy they have left with their dismissal of last year’s hit “Bohemian Rhapsody.”

When rainy day predictions turn out to be nothing more than days of sunshine, it’s best to change the channel.

“Rocketman,” directed by Dexter Fletcher, who took over last year’s classic “Bohemian Rhapsody” after original director Bryan Singer was removed, is one of the most uplifting yet profoundly pessimistic biographies you will ever see on the big screen. Though nearly everyone knows the Elton John saga in which he rose to fame as a young man, few are aware of how alcohol, drugs and conniving advisers nearly destroyed him.

The beginning of the film defines its strength as you watch Elton walk out of a Madison Square Garden concert to attend an alcohol counseling session. Dressed in a costume where he resembles a horned Satan with angel wings, he begins to tell his life story that will leave you transfixed. 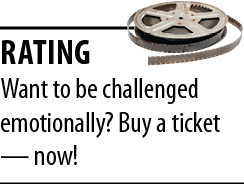 Without saying more, Elton revisits his childhood where he was treated with contempt by his father (Steven Mackintosh) and largely ignored by his mother (Bryce Dallas Howard). As you watch him tell his story in the therapy session, you see him visited by his 8-year-old self, where they join together in a mesmerizing song that leaves you both smiling and tapping your feet in disbelief.

Elton is lovingly played as a boy by Matthew Illesley and by Taron Egerton as an adult. Egerton brings Elton to life as both a gay man looking for love in all the wrong places and an artist whose partnership with lyricist Bernie Taupin (Jamie Bell) brings magic to the stage with every song.

Egerton has given us a series of engaging performances, ranging from his role as Eddie Edwards in “Eddie the Eagle” (2015) to Gary “Eggsy” Unwin in the monumentally appealing “Kingsmen” films (2014 and 2017). Bell is an equally talented actor who has preferred edgy films ranging from “Billy Elliot” (2000) to “Snowpiercer” (2013). Here, they make a great team as they reflect the close friendship that sustained our two classic musicians from the time they first met.

Ironically, “Rocketman” reveals that Elton John had a lot in common with Freddie Mercury. While both inspired audiences on nearly every continent with songs and stage performances that are legendary, both went down paths where excess nearly destroyed them.

When Mercury left Queen, he slowly spiraled downhill under the guidance of his would-be lover. Elton did the same thing when he said goodbye to Taupin. Accepting the love interest from his conniving manager John Reid, marvelously played in a hateful fashion by Richard Madden, Elton was saved from his massive use of alcohol and controlled substances by his eventual journey to rehab.

The many songs you see Elton sing from boyhood to his later years are a great part of this film. Each produces a glorious moment, ranging from “Don’t Let the Sun Go Down on Me” and “Your Song” to the film’s title, “Rocketman.” In that regard, wait until you see the moment he takes the stage for the first time at the Troubadour in Los Angeles, where director Fletcher literally elevates both Elton and the audience into the air when the star sings and performs “Crocodile Rock.”

While Elton has performed numerous songs for which he has earned massive admiration, his greatest accomplishment may very well have been cooperating with Fletcher in the making of this film. He conquered his alcoholism years ago and married a man he profoundly loves, and he is not afraid to show his weaknesses that nearly destroyed both his life and career.

While HIV killed Mercury at age 45, to his everlasting credit, Elton has been able to embrace his past, warts and all. He is a figure to be remembered through the ages, and I encourage you to see this film as soon as possible.•