To recognize the accomplishments of female attorneys in central Indiana, the IndyBar’s Women and the Law Division presents the Antoinette Dakin Leach Award.

Please take a moment to nominate a female attorney who has demonstrated some of the attributes of Antoinette Dakin Leach by encouraging other women in the pursuit of this honorable profession or blazing a path not taken by others.

Visit indybar.org/adl for the online nomination form. The deadline for nominations is July 26. The recipient of the award will be honored at an event this fall. 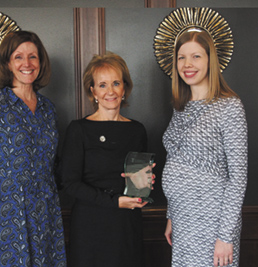 In 1893, Antoinette Dakin Leach made history as the first woman to challenge a bar admission denial based on gender. Leach’s lawyers argued in front of the Indiana Supreme Court that despite not being allowed to vote, if a woman was otherwise qualified, she could be admitted to practice law in Indiana. Although the court granted Leach a license to practice law, many male lawyers did not agree with the decision, and she was not admitted to the Indiana State Bar Association until 1909.

In addition to serving as a pioneer for women in the practice of law, Leach was also a pioneer in embracing modern technology as the first lawyer to submit typewritten filings to the court instead of writing them by hand. Leach graduated from the University of Tennessee Law School in 1884 and served as a court reporter for the Greene-Sullivan Circuit Court before gaining her Indiana law license.