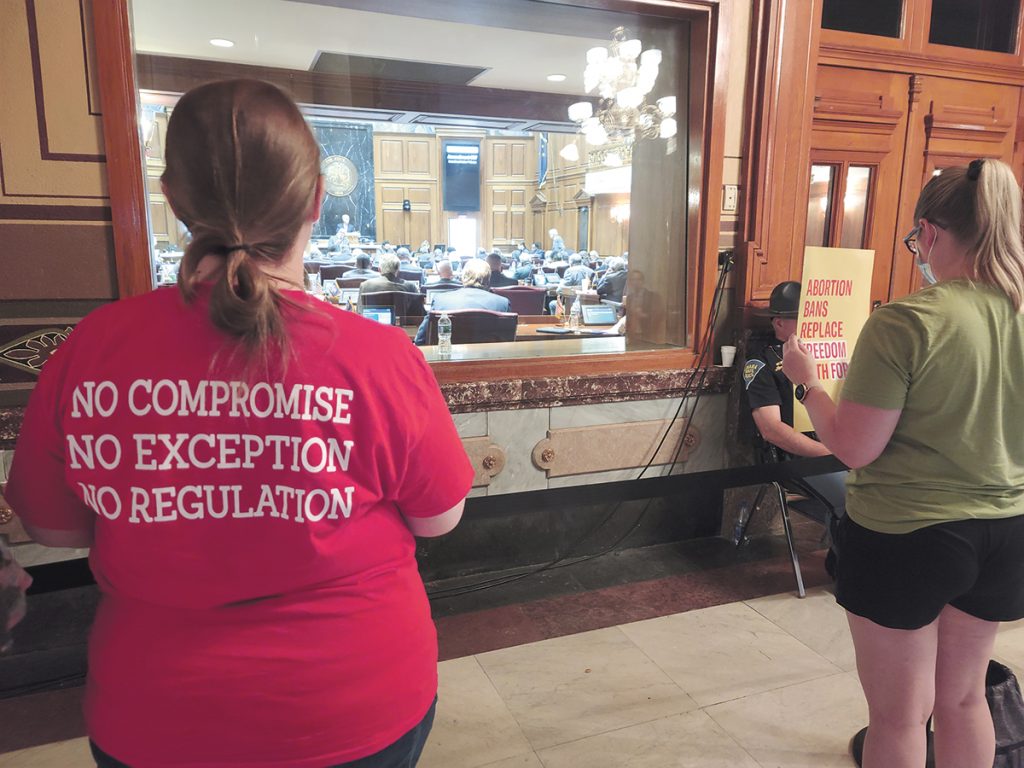 Ashley G. and Michelle Ferguson, protestors on opposing sides of the abortion issue, watch as the Indiana House debates a series of amendments to the state’s near-total abortion ban. (IL photo/Marilyn Odendahl)

Calling the Monroe Circuit Court’s order blocking the state’s new abortion ban a “judicial amendment of the Indiana Constitution,” the state of Indiana is assailing the trial court for ignoring the text and history of the state’s founding document in order to invent a new right.

The 64-page brief was filed Nov. 2 in Members of the Medical Licensing Board of Indiana, et al. v. Planned Parenthood Great Northwest, Hawai’i, Alaska, Indiana, Kentucky, Inc., et al., 22S-PL-00338, which challenges the constitutionality of Senate Enrolled Act 1, Indiana’s new near-total abortion ban. The state is asking the Indiana Supreme Court to overturn the preliminary injunction against SEA 1 on the grounds that the plaintiffs do not have standing and that the state’s constitution does not declare a right to abortion.

In the state’s brief, Indiana Attorney General Todd Rokita asserts the trial court failed to apply constitutional text, history and binding precedent when ruling on SEA 1. Instead, he argues, the court departed from standard practice by concluding the drafters of the Indiana Constitution had “significant … deficits.”

“Judges, however, may not invent new ‘rights’ whenever the Constitution strikes them as ‘deficient.’ Rather, judges ‘must enforce the Constitution as written and intended,’” Indiana’s brief argues, citing Bd. of Trustees of Pub. Employees’ Ret. Fund of Ind. V. Pearson, 459 N.E.2d 715, 717 (Ind. 1984). “That principle forecloses the trial court’s decision to recognize a novel right to abortion that lacks any support in the constitutional text and that history shows the founding generation would never have recognized.”

After the U.S. Supreme Court ruled in Dobbs v. Jackson Women’s Health Org., 597 US ___ (2022), that no federal right to abortion exists, Indiana was the first state to pass a law prohibiting nearly all abortions.

However, a week after the abortion ban took effect, Owen Circuit Judge Kelsey Hanlon granted the plaintiffs’ motion for a preliminary injunction. The trial court found the new law violated the right to liberty as guaranteed in Article 1, Section 1 of the Indiana Constitution.

In its appeal to the Supreme Court, the state is presenting four arguments.

First, the state asserts the plaintiffs — all of whom are abortion providers — lack standing to assert an Article 1, Section 1 claim because they do not allege any personal injury from a violation of their rights. Also, the state argues the plaintiffs’ claim fails on the merits; Section 1 does not confer a right to abortion in any event; and, merits aside, the requirements for preliminary injunctive relief are not satisfied.

Indiana maintains that Article 1, Section 1 of the state’s constitution expresses “a basic philosophy of government and the relationship between the individual and the State.” The provision does not confer any judicially enforceable rights, the state claims.

Moreover, Indiana continues, the language of Section 1 and a review of the historical context in which it was drafted shows the framers did not consider abortion to be a fundamental or natural right.

“The trial court identified no such evidence and even admitted that ‘abortion was not lawful at the time the Indiana Constitution was ratified,’” the state asserts in its brief. “The trial court instead took the unprecedented position that Indiana’s constitutional text and history could be cast aside because the judge deemed ‘those who wrote our Constitution’ — and the ‘1851 Constitution’ itself — to have ‘significant … deficits’ ‘by today’s lights.’”

Six times, the state hammers on the trial court’s use of the words “significant … deficits” in its decision.

The ruling from the Monroe Circuit Court, where Hanlon presided as a special judge, acknowledged abortion was not lawful when the state’s constitution was ratified. Yet, the trial court maintained that does not prevent Article 1, Section 1 from being interpreted as “protecting bodily autonomy,” which includes a “qualified right” for women not to carry a pregnancy to term.

Hanlon wrote, “The significant, then-existing deficits of those who wrote our Constitution — particularly as they pertain to the liberty of women and people of color — are readily apparent.”

She then cited to former Indiana Supreme Court Justice Ted Boehm’s dissent in Clinic for Women, Inc. v. Brizzi, 837 N.E.2d 973 (Ind. 2005). Boehm noted that when the 1851 constitution was drafted, people of color did not have the right to vote, nor did married women have property rights. He concluded that reality “by today’s lights is wholly incompatible with fundamental principles of ordered liberty.”

In its brief, the state recognizes the trial court was highlighting the absence of rights for women and minorities. But then, Indiana brushed that history aside and argued there is no evidence suggesting the state’s longstanding prohibition on abortion had anything to do with those issues.

“Nor could the trial court explain why Indiana continued to ban abortion long after the issues it identified were addressed,” Indiana argues in its brief. “… Embracing the trial court’s theory would require declaring that Hoosiers of every generation — including the current one — have ‘deficits’ so ‘significant’ that their views must be disregarded.”