Home » Breaking down to break through: Judges share how they cope with emotional, traumatic exposure

Sifting through photo after photo of abuse, neglect and violence day in and day out can leave unwanted imprints on a judge’s mind. Or, a judge may lie awake at night with racing thoughts about which parent should receive custody of an innocent child in a contentious family dispute.

Grappling with the emotional exhaustion and vicarious trauma that come with being a judicial officer is a common — and constant — battle Indiana judges face.

The American Bar Association’s 2020 National Judicial Stress and Resiliency Survey of more than 1,000 judges nationwide, including Hoosier judges, revealed new data about what stressors judges face, how those stressors affect them personally and strategies the judiciary can use to mitigate them.

Included among the judges’ top stressors were increasingly heavy caseloads, important decision-making, isolation and secondary trauma from exposure to testimonies, photographs and other evidence.

Secondary or vicarious trauma — sometimes known as compassion fatigue — is the emotional residue of hearing traumatic stories and being witness to the pain, fear and terror that trauma survivors have endured.

Terry Harrell, executive director of the Indiana Judges and Lawyers Assistance Program, said first responders — which she defined to include lawyers and judges — have hurting people come to them every day. That alone can take a toll on a judge’s mental and emotional health.

“You do have a responsibility to do something to make the situation better in some way, and it’s having that responsibility that makes you vulnerable to secondary trauma,” Harrell said. “It’s when we don’t have enough time to recover before we go in and have to do the next hard thing that it can start to take a personal toll on us.”

That’s the advice Marion Superior Judge Jose Salinas was given as a young lawyer, even though he admits that being a judge is a 24/7, on-call job. Contentious juries and difficult case content can make it hard to clear one’s head at the end of the day.

“It is a stressful job,” Salinas admitted. “The big thing for me is to leave it in the office. And you do have to find other things to get your mind off it.”

For Salinas, investing in sports and watching science fiction or superhero movies gets his mind away from work.

“I can’t think when I’m watching those movies — nothing about the stress of the day comes into my head,” he said. “That’s what works for me.”

“Part of managing my stress was keeping the caseload that I’m comfortable with intact,” he said. “Now, if you’re in a smaller county, you may not have that option. You may have to just take all the cases from driving offenses to murders and rapes.”

Salinas acknowledged that those heavier, major felony cases are the ones that he has struggled with the most.

“You can’t unsee some of the stuff you would see,” he said.

What he faces as a judge is just like anything else he faces in life, Stefaniak opined.

“You’ve got to make sure you have outside activities that make you happy and that you take the time to engage in them. Your whole life just can’t be all about work,” he said. “It’s just kind of one of our occupational hazards to deal with the doom and gloom of the world.” 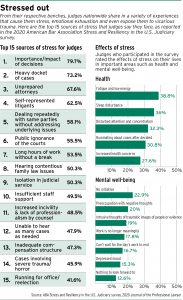 Stefaniak previously presided over a felony court for more than a decade, where he says he often saw cases involving the death penalty, life without parole, and triple and quadruple homicides.

“In all candor, you haven’t seen anything until you’ve seen the photos of an autopsy of a 19-month-old child,” he said. “That’s stuff you can’t unsee.”

When other heavy cases arise, such as those involving which parent should be granted custody of a child, Stefaniak said having other judicial officers as a sounding board to process through the decision from different angles can be helpful. Family and friends can also be a helpful avenue for processing emotions.

“That certainly helps,” he said. “But I tend to like to sort through things on my own and only call people if I need to.”

For judges in more rural counties, Shaheed said the stress of making decisions could be more confrontational than for judges who live in larger communities.

“It’s one thing to do this kind of work in Indianapolis,” he said, “but it’s another thing to do it in a smaller community where everybody knows the judge and the judge knows most people.”

A shoulder to lean on

Indiana Chief Justice Loretta Rush said the issue of cultivating well-being among Hoosier judges is critically important to her.

“I think I’m maternal toward our judges,” Rush said. “Like with my own children, I’m like, ‘Please take care of yourself. We want to help you.’”

In her 40 years in the legal profession, Rush said she’s seen her own share of difficult cases. She recalled one of the final cases during her time as a juvenile court judge when she presided over a child molestation case.

“She was sitting there, she’s a little kid and she’s kind of twirling her hair leaning back in the seat,” Rush said. “And when she was done saying what had happened to her, she looked at me and apologized and said, ‘I hope this isn’t too hard to hear.’

“She was having empathy for me because I had listened to her testimony,” the chief continued. “I had to go take a break and go back and have a good cry in my chambers, because sometimes it just gets you. And you’ve got to really look at how it gets you.”

During a recent round of Court of Appeals of Indiana vacancy interviews, the Indiana Judicial Nominating Commission asked many applicants about how they process the difficult cases they face.

Rush said the commission reviews several hundred complaints filed against judges. Some, though not all, are filed as a result of actions that judges take that may impact their well-being.

“Particularly ones with family, children, murder, neglect,” Rush said. “These are tough cases.”

If ever in need of a listening ear, someone to connect with or referrals to additional services to address emotional and mental well-being, Indiana judges can call JLAP for help, Harrell said.

She also recommended prioritizing sleep, making time for physical exercise, and practicing mindfulness, meditation or simply talking to others.

In addition to JLAP’s referral services, Rush said judges can receive judicial education credits for wellness, screening and education. She said the Indiana Supreme Court has also made those topics part of a regular curriculum for judges so they can learn to take care of themselves on the bench.

“How do you, as a judge, dispense justice and not let it take a toll on you?” the chief said. “We need our judges strong and healthy and able to fairly look at these cases. So it is a priority of the court.”•