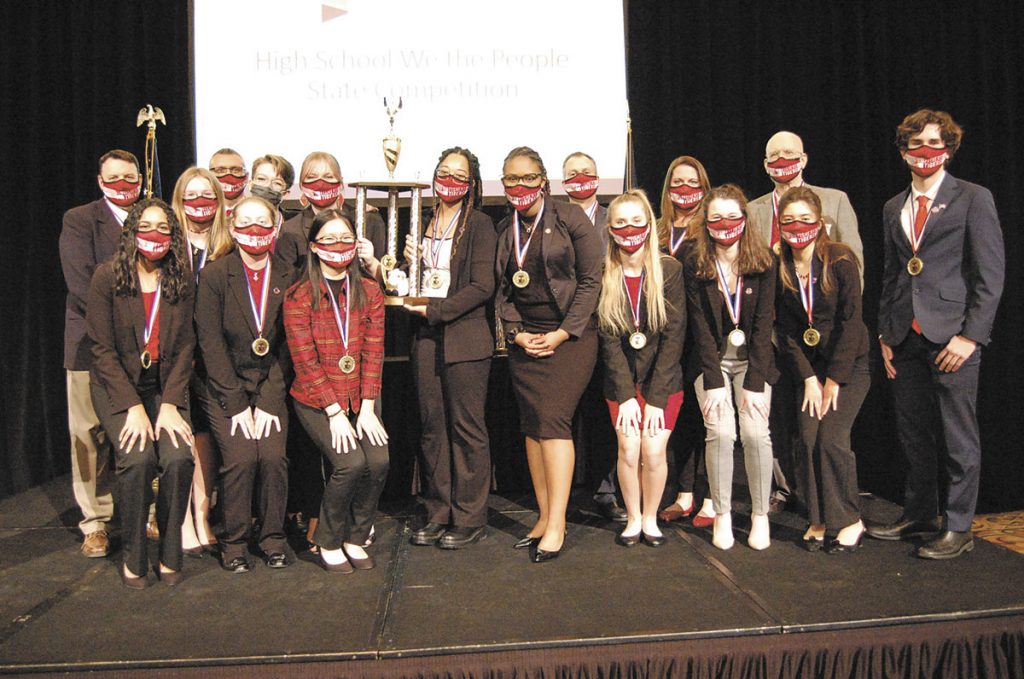 The Fishers High School We the People team placed second in the 2022 national competition, the highest any Indiana team has ever finished. (Photo courtesy of Indiana Bar Foundation)

Every year, the students arrive at the Fishers High School We the People class with different abilities and shortcomings.

Some might be skilled at public speaking while others excel at critical thinking. A few students will be very smart, but will need to learn to think on their feet. Others will have to learn to collaborate.

Every year, the students both polish the skills they have and learn new ones as they study the Constitution and Democracy. And, routinely, the high school team places in the top spots in the regional and state competitions, earning them invitations to the national contest.

But this year, the Fishers High School team made history by finishing second among 47 teams from across the country who competed in the 2022 National We the People Finals in April. This is the highest any Indiana high school team has ever placed.

The teacher, Liz Paternoster, attributed the triumph to something that cannot be honed or practiced – attitude.

“These kids just really wanted to see every other kid be successful,” Paternoster said. “I don’t know if that’s really something I can teach. They really cared a lot about each other, and they wanted to perform well for each other and do anything they could to help each other out. That was the key to our success.”

“We are so excited,” Tim Kalgreen, director of civic education at the Indiana Bar Foundation, said, noting the young Hoosiers showcased their constitutional knowledge, understanding of government and command of history. “This shows that Indiana is in really good hands for the future civically for our communities.”

More than a medal

The Indiana Bar Foundation supports the state’s We the People program. It offers teachers course materials and training, including a free summer study program, and organizes the state-level competitions.

Paternoster was enticed into the We the People program by the support. In 2002, she was teaching at a small private school and needed textbooks for her students when she came across a flyer advertising the We the People summer institute and free class materials.

She arrived at Fishers High School in the fall of 2007 with the We the People program tucked into her bag.

We the People at the high school level is offered as an elective class. As Paternoster noted, the team is comprised of whoever chooses to enroll because the program has restrictions on recruiting and selecting students.

Typically, the students, “across the board,” come into the class “ready to fight,” Paternoster said. The teens want people to listen and to agree with whatt hey have to say.

However, through studying and preparing for the We the People competitions, their hardlines soften, she said.

“Education brings moderation,” Paternoster said. “They lend themselves to be more open to compromise and tolerant of other people’s views.”

The competitions resemble a Congressional hearing. Students present their prepared opening statements on complex topics they have been given in advance before responding to the questions by judges.

For the national competition, one of the topics asked was whether governments have exercised “too much, too little, or just the right amount of power during the COVID-19 pandemic?”

The Fishers team of 11 tackled the topic. First, they decided to approach the inquiry by examining how governments in other countries responded to the coronavirus and compared that to the U.S. government’s reaction. As part of their research, they convened a panel of Indiana House Speaker Todd Huston, Fishers Mayor Scott Fadness and Monica Heltz, public health director for the Fishers Health Department.

Another question asked was if the Fourth Amendment placed any restrictions on the National Security Agency. That led to questions about police, so the students invited local law enforcement and the high school’s safety director to give their insights.

Such study and detailed preparation teaches the students how to be effective citizens, Paternoster said.

“So, these kids, once we get to the national finals, they have connections all throughout their local and state community that they reach out to for other things,” she said. “… They increase their level of political efficacy. They know about the government and they know they can make an impact and they know how to do it in an appropriate, effective way. That means so much more than a medal.”

Fishers Junior High School also made history, bringing home its fifth first-place finish from the national 2022 We the People Invitational. Unlike the high school competition where the contest is limited to the top teams from each state tournament, the middle school invitational is open to any team wanting to participate.

The We the People program at Fishers Junior High was started in 2014 and has previously won the national contest in 2017, 2018, 2020 and 2021. Social studies teacher Michael Fassold and English teacher Anthony Sturgeon jointly teach the We the People class by mixing the study of American history with readings of poetry from the country’s founding, letters written by leaders and books like “Just Mercy,” by attorney Bryan Stevenson.

Fassold described the We the People curriculum as having an “authenticity” that is rare in education. The students not only just learn and understand the material but, during the follow-up questioning by the panel of judges, they have to apply it, he said.

“It’s not the preparation of the paper and it’s not the recitation of the paper,” Fassold said. “It’s the free-form follow-up questions where the kids have to listen, think on their feet, synthesize these arguments based on what they have learned. … To me, that is just such a genuine thing. That six to eight minutes of follow up is where the rubber meets the road.”

Fassold and Sturgeon also noted the dramatic change the students undergo as they progress through the We the People class. The eighth-graders often start with little knowledge of history so they begin by learning about the country’s founding. They then concentrate on crafting and presenting their statements as well as supporting their arguments during questioning.

Like Paternoster, Sturgeon sees the students benefiting long term from the program.

“He tells the kids every year the ultimate goal is to develop a citizen of this country that’s going to have an understanding of how things need to function. Therefore, as they continue to age, they can be the true leaders of tomorrow.”•