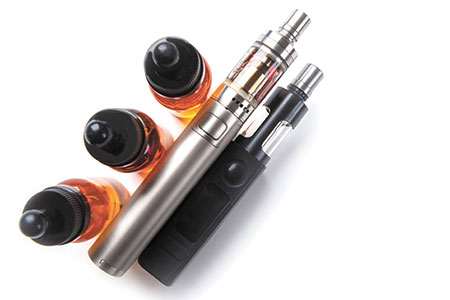 A man who transported 2,500 THC vape cartridges across state lines will not have his dealing conviction overturned after the Court of Appeals of Indiana rejected his appellate arguments.

In October 2020, Tariq Fuad Hamdi’s employer instructed him to drive a van containing eight large black trash bags from Chicago to Logansport. Hamdi was to deliver the bags to Kye Holcomb, who had arranged days earlier to purchase 2,500 THC vape cartridges for $18,000.

After arriving around midnight, as Holcomb and Hamdi were carrying the bags the porch of the house where Holcomb was to store the cartridges, police arrived to investigate a neighbor’s report of a possible burglary in progress.

When Logansport officer Jonathan Flory ordered Hamdi to freeze, Hamdi ran toward the porch but tripped and fell. Flory then apprehended Hamdi and placed him in handcuffs.

Flory noticed through a gap in one of the loosely tied trash bags that the bag appeared to contain boxes of vape pens or cartridges that were labeled with the word “DIME,” written in such a way that the letter “M” looked like a “marijuana leaf emblem.” Police then found approximately $18,000 on Holcomb and the two were arrested.

The record contained close-up photographs of the front of individual boxes for six flavors of vape cartridges, and in the bottom right corner of the front of each of those boxes was a triangle that contains an image of a marijuana leaf and an exclamation point, with the letters “CA” underneath the triangle.

The state wished to test some cartridges to confirm the presence of hash oil, but the Indiana State Police Laboratory informed Logansport police that it did not have the equipment required to determine the amount of hash oil in liquid solutions.

A certified laboratory in Mississippi ended up testing the vials to determine how much hash oil they contained. The evidence technician for the evidence room at the Logansport Police Department randomly selected seven different colored boxes, which were labeled as seven different flavors, from among the bulk packages, and sent the boxes to Mississippi for testing.

The lab report indicated each of the 1,000 mg vials ranged from 19.4% to 30.5% THC.
The director of the lab, Dr. Mahmoub Elsohly, testified about his qualifications, his lab, the process for testing and the results.

A jury found Hamdi guilty of Level 5 felony dealing more than 300 grams of hash oil. The Cass Superior Court imposed a sentence of three years, suspended all but the one day that Hamdi had already served, and placed him on probation.

On appeal, Hamdi didn’t challenge the elements that constituted Class A misdemeanor delivery of hash oil, but rather the enhancement of his conviction to a Level 5 felony.

Hamdi first asserted there “was no measured weight for the vape pens in this case,” citing a lack of testimony that each pen truly contained 1 gram of liquid or that the representations on the packaging were untrustworthy.

However, due to the volume of cartridges, the COA wasn’t persuaded.

“Hamdi’s argument might give us pause if police had not seized 2,500 cartridges represented to weigh one gram each, for a total seizure of 2,500 grams of adulterated hash oil, when only 300 grams were necessary to elevate his conviction to the Level 5 felony,” Judge Melissa May wrote. “… Even had some, or even all of the 2,500 cartridges, not contained the full one-gram solution, the fact that Hamdi delivered more than eight times the number of cartridges necessary to reach 300 grams leads us to conclude ‘the quantity of the drugs or controlled substances is so large as to permit a reasonable inference that the element of weight has been established.’”

Hamdi also asserted there was no “reliable reference point for the jury to even infer the untested vape pens contained illegal hash oil, let alone an aggregate of 300 grams of illegal substance.”

“While Dr. Elsohly could testify only to the seven samples that were sent to him, the jury had other evidence before it that demonstrated a form of homogeneity,” May wrote. “For example, Holcomb testified he had arranged to buy vape cartridges containing ‘marijuana’ or ‘THC,’ which suggests all cartridges should have contained THC. Officer Flory and Officer Alec Vantuinen both testified they believed, based on their experience as police officers, that the boxes contained THC because a marijuana leaf symbol was on the boxes.

“… The jury could see from the images presented as evidence and from the bags of boxes present in the courtroom that the boxes were homogeneous in having marijuana symbols on them and in being the same DIME brand,” May continued. “In addition, while the chemical testing may have determined the seven cartridges all contained different levels of THC, they were homogenous in that every one of the cartridges contained THC. The State presented sufficient evidence for the jury to determine whether Hamdi had sold more than 300 grams of hash oil.”