Advocates for expanding mail-in voting in Indiana may have been preparing for a celebration when the federal court issued its ruling Aug. 21.

The previous day, the Southern Indiana District Court had handed down two other decisions that overturned the state’s process for matching signatures on absentee ballots and prevented the state from purging the voter rolls without confirming the individual voters in question had moved. When the ruling in Barbara Tully et al. v. Paul Okeson, et al., 1:20-cv-01271, was posted, advocates might have been expecting a third decision in their favor.

However, Judge James P. Hanlon was not convinced by the plaintiffs’ argument that the Constitution requires Indiana extend the right to vote by mail to all Hoosiers in the upcoming general election Nov. 3 in light of the pandemic.

“Plaintiffs ague that Indiana should expand voting by mail for the general election as it did for the primary because it will enable more people to vote,” Hanlon wrote. “But general elections already have substantially higher numbers of voters than primaries do. Combining that increase with increased votes from vote by mail privileges — even if that privilege is not expanded, and certainly if it is — could easily strain Indiana’s voting system because those systems are instead equipped for in-person voting.”

The individual plaintiffs and Indiana Vote By Mail, Inc., appealed to the 7th Circuit on Aug. 25, linking their argument for no-excuse absentee balloting to the health risks of in-person voting during the COVID-19 pandemic. They assert that Indiana’s refusal to lift the restrictions on voting by mail will force Hoosier voters to choose either risking their health and potentially their lives and the lives of their loved ones or giving up the right to cast a ballot.

“Case law, and common sense, overwhelmingly support the conclusion that requiring in-person voting during a pandemic represents a substantial burden for many voters,” the plaintiffs stated in their appeal.

As of IL deadline, the state has not filed a notice of appeal of the signature match or purge rulings. Indiana Secretary of State Connie Lawson declined to comment on the rulings.

The lawsuit challenging Indiana’s method for matching signatures, Mary J. Frederick et al. v. Connie Lawson, 1:19-cv-01959, successfully argued the state was violating the 14th Amendment’s Due Process and Equal Protection Clauses. Indiana election officials now must notify the voter and provide an opportunity to fix the problem before rejecting any absentee ballot on the basis the signature on the ballot does not appear to match the signature on the voter registration record.

The second lawsuit, Indiana State Conference of the NAACP et al. v. Connie Lawson et al,, 1:117-cv-02897, was mirrored by Common Cause Indiana v. Connie Lawson, et al., 1:17-cv-03936. Before removing any name from the voter rolls, the state must get a confirmation in writing from the voter of the change in residency or follow the National Voter Registration Act mandate of notifying the voter and, if no response is received, waiting two federal election cycles.

Lawson detailed the preparations for the November election during Gov. Eric Holcomb’s COVID-19 conference Aug. 26. She did not mention any of the court rulings but indicated the 2020 general election would be conducted just as they have in previous Novembers.

“We are going forward with a normal election process here in Indiana,” Lawson said. “We will not be making changes like we did in the primary since the stay-at-home order has been lifted.” 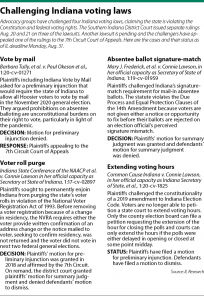 ‘Confined to your home’

Time is posing a major constraint in the effort to expand absentee balloting for the general election just as Indiana did for the June 2 primary. Election Day is just over two months away and cost-cutting measures at the United States Postal Service have created concerns that the slowdown in the mail will prevent voters from meeting the deadline to get their ballots counted.

Along with their appellate brief, the plaintiffs filed a motion asking the 7th Circuit to expedite their appeal or issue an injunction pending the appeal. Also, the plaintiffs said they would be willing to forego submitting a reply if that would bring a quicker ruling.

The 7th Circuit Court of Appeals did issue an order for the state to file its response by Aug. 31, two days ahead of the Sept. 2 date requested by the plaintiffs.

Indiana Attorney General Curtis Hill’s office said in a statement on Aug. 26 the office was reviewing the appeal. “We are pleased with the district court’s ruling and we are confident the district court reached the right decision,” a spokeswoman said.

Lawson pointed out state law includes 11 categories, like having to work all day or being 65 and older, under which a Hoosier voter might be eligible for an absentee ballot. Fear of COVID-19 is not a valid reason for requesting a mail-in ballot, but the secretary noted the statute does contain an exception for those who are confined due to an illness or injury.

“If you’re confined to your home because you have a condition that puts you at high risk and you’re self-isolating, you may qualify to vote absentee by mail,” Lawson said. “But it you’re still going to the grocery store and running other errands, you’re not confined to your home.”

Hanlon dismissed the plaintiffs’ concerns about voting while COVID-19 is still a grave public health risk. He acknowledged the pandemic “undisputedly presents new and serious challenges,” but he found the plaintiffs did explain why those challenges trigger constitutional protections.

Indiana Vote By Mail said allowing no-excuse absentee balloting would reassure qualified Hoosiers they could cast a ballot without fear of contracting the virus.

“A reversal of Judge Hanlon’s unfavorable ruling will safeguard and promote public health by eliminating unnecessary in-person interactions and preventing COVID-19 transmissions at public polling locations where no enforcement measures are in place to require face masks or proper social distancing and where air circulation may be inadequate to prevent spread of the disease,” Vote By Mail said in a statement.

Even without no-excuse absentee balloting and the deadline to apply for absentee ballots weeks away, the number of applications has already nearly doubled from the last presidential election. Lawson said as of the morning of Aug. 26, the state had received 99,146 applications for mail-in ballots compared to the 53,818 requested for the entire election period of 2016. Moreover, the state is predicting between 1.3 million and 1.8 million Hoosiers will vote absentee-by-mail in the 2020 general election.

Under Frederick, the state is enjoined from verifying the mail-in ballots by matching signatures. The court ordered Lawson to notify election officials across Indiana of the injunctions and implement notice and cure procedures in time for the Nov. 3 election.

Plaintiffs’ attorney William Groth of Macey Swanson LLP said that ruling will ensure no Hoosier’s absentee ballot will ever again be rejected without receiving a notice of a signature mismatch.

“This is a long overdue correction of Indiana’s election laws,” Groth said. “We hope that Secretary Lawson will accept that this decision is a correct interpretation of the 14th Amendment and will devote her energies to implementing Judge (Sarah Evans) Barker’s order rather than appealing or obstructing it.”

Also as part of the Indiana Sstate Conference of the NAACP litigation, Indiana will not be able to rely on its own database, Indiana Data Enhancement Association, to clean the voter registration lists. IDEA was created under Senate Enrolled Act 334 and touted as a replacement for the flawed Interstate Voter Registration Crosscheck program.

Julia Vaughn, policy director of Common Cause Indiana, explained the purpose of the lawsuit was not to prevent the state from using Crosscheck. Rather, the plaintiffs argued the state was violating the National Voting Registration Act by relying on second-hand information to purge voters.

“I hope this is the end of the road for this case,” Vaughn said, noting the state appealed the preliminary injunction but the 7th Circuit affirmed and remanded. “… I hope (the state) … walks away from the crazy idea you can ignore vital voter laws.”•