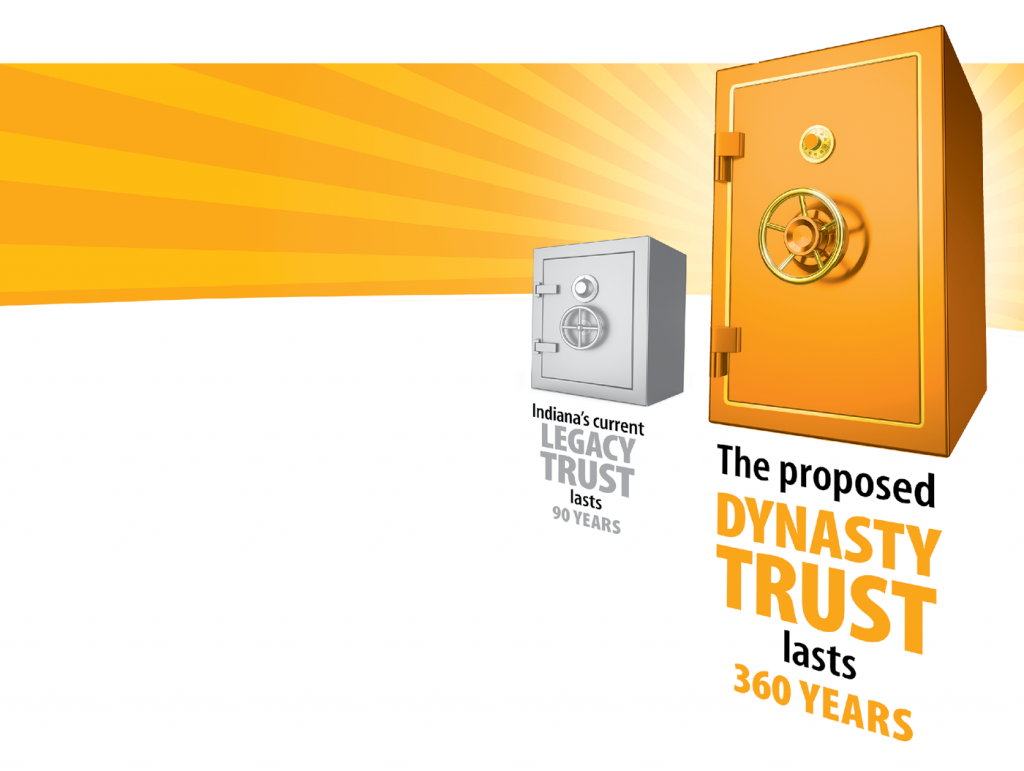 Dating back to the time of King Henry VIII, the estate planning concept of the “Rule Against Perpetuities” is notorious for being among the most difficult topics taught in law school. Perhaps that’s why Indiana is in a minority of states that have yet to significantly amend its version of the rule.

Currently, assets in an Indiana legacy trust must vest within 90 years, covering a few generations of heirs. But a proposal before the Probate Code Study Commission would quadruple that time to 360 years, allowing for the creation of Hoosier “dynasty trusts” for the first time.

Members of the estate planning bar say there is nothing nefarious about dynasty trusts. In simple terms, the long-lasting trusts allow for very wealthy families to protect their assets for many generations while avoiding federal transfer taxes. Allowing for the trusts would also put Indiana at an economic advantage, trust lawyers say, as more than 30 other states allow their citizens to keep assets in trust for a century or more.

But this isn’t the first time the Rule Against Perpetuities has faced amendment in Indiana, and opposition to dynasty trusts remains. Creditors have raised concerns about an inability to collect on assets, while some lawyers wonder if 360 years is excessive. Sen. Aaron Freeman, R-Indianapolis, chairs the Probate Code Study Commission and presided over its first meeting of 2020 on Sept. 30. Noting the stark difference in perspectives, he tasked estate planning lawyers with what could be a big ask: bridging the “Grand Canyon divide” between those who support dynasty trusts and those who don’t.

Old English common law set the limit at 21 years, said Jeff Kolb, the Vincennes estate planning lawyer who sits on the Probate Code Study Commission and presented the 360-year dynasty trust recommendation on Sept. 30. That meant the interest in the trust would have to vest within 21 years of the lives of the beneficiary.

Over the years, though, some states began a so-called “marketing ploy,” according to Indianapolis lawyer Paul Kraft. States began extending their 21-year limits to roughly a century to attract more business to in-state banks and trustees.

“Some of the people who are putting assets in these trusts have gone forum shopping,” Kraft, of Frank & Kraft, said. “They thought, ‘Let me go pick the best state that is the most desirable for being able to extend the time on this trust.’”

Now, states such as Florida have allowed for trusts lasting up to 360 years, while other states have repealed their rules against perpetuities outright. The current proposal in Indiana is not a repeal, Kolb said, but rather is based on the Florida law.

The most basic benefit of a dynasty trust is it protects assets for many generations, Rebecca Geyer of Geyer & Associates in Carmel said. There are also tax benefits, she added — specifically, the ability to avoid federal estate and gift taxes, except when the transfer is made or a federal exemption is exceeded.

The problem with not allowing dynasty trusts in Indiana, Geyer said, is that other states do allow them. That means Indiana is losing potential revenue coming from state income taxes and fees paid to manage trusts in the Hoosier State.

“It’s sophisticated — it’s not the type of trust an average person is going to take advantage of, but there are a lot of people who do want to provide for multiple generations and who have wealth,” Geyer said. “We’re not allowing our citizens within Indiana to do that, and we don’t want to send them elsewhere.”

The Florida law was chosen as a model for amending Indiana’s rule against perpetuities because of the state’s elder population, said Kolb, of Kolb Roellgen Johnson & Traylor LLP. Indiana has previously adopted other Florida estate planning laws, he added.

Kolb and Geyer support the 360-year limit, with Geyer noting that would cover roughly 10 generations of beneficiaries. Kolb would support a repeal of the Rule Against Perpetuities, but he knows a full repeal does not have enough support.

Kraft is in favor of allowing dynasty trusts, describing them as another tool for wealthy estate planning clients. But he also opined that 360 years could be excessive.

“Most clients who want to set up a dynasty trust, maybe they’ve got some large amount of wealth and some desire to let it extend to their grandkids or great-grandkids, who they probably know,” Kraft said. “But at 360 years, you don’t know them.”

Opposition to the dynasty trust proposal at the September meeting of the Probate Code Study Commission came from the Indiana Bankers Association, represented by Indianapolis attorney Kay Dee Baird. She raised a creditors’ rights issue, saying that “tying up” assets for 360 years could impact creditors’ ability to collect on those assets for centuries.

Merrillville attorney James Martin, who sits on the commission, described Baird’s comments as a “gross mischaracterization.” Assets held in a legacy trust are not susceptible to creditors’ claims, Martin said during the meeting, and extending the life of a trust to 360 years wouldn’t change that fact.

Geyer made a similar argument, telling IL that asset protection options such as creditor and divorce protection are common in the language of a trust.

There are pros and cons to establishing a dynasty trust, Kraft said. In addition to the tax and protection benefits, there’s also the ability to set up professional management for a pool of money for many years.

But on the flip side, dynasty trusts give beneficiaries less power and less flexibility. That’s not necessarily a bad thing, Kraft said, but it does mean it might be harder to change with the times. Plus, you won’t know who your trustee is 360 years down the road.

Still, Kraft and the lawyers say there’s no reason Hoosiers shouldn’t have the option to pursue a dynasty trust if they wish. As a member of The American College of Trust and Estate Counsel, Geyer said she’s observed that Indiana tends to be more proactive with its probate code than other states. Dynasty trusts, however, are the exception.