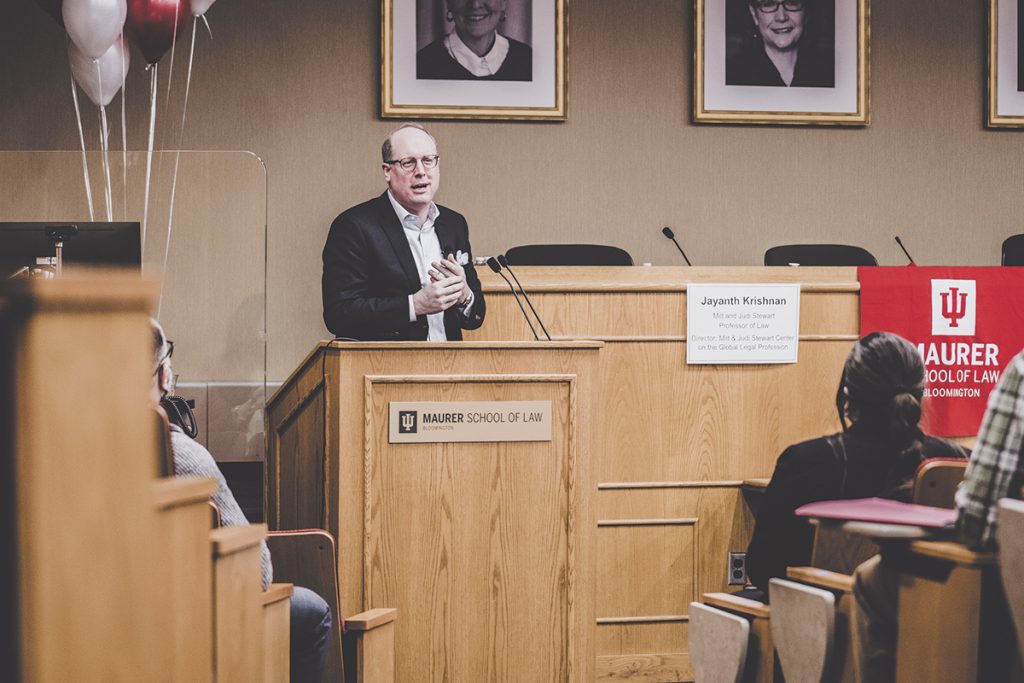 Outgoing IU Maurer dean Austen Parrish cites faculty and students as keys to the success of the law school. (Photo courtesy of IU)

While speaking of his tenure as dean and the changes at Indiana University Maurer School of Law during his eight-plus years as leader, Austen Parrish dropped a phrase that is often uttered by Hoosiers.

“I am blessed,” said the British Columbia native who came to Bloomington in 2014 by way of California.

Parrish was taking time to reflect as he was preparing to announce his decision to leave IU Maurer to become dean of the University of California, Irvine School of Law in Irvine, California. On Aug. 3, he will join the young West Coast school that enrolled its first class in 2009 and boasts a reputation for innovation.

The IU Maurer leader, who has been described by alumni as “unflappable,” “very gregarious” and “always having a pocket square,” continued to sound like a Hoosier as he explained that the primary reason for his departure was so he and his family could move back to where their parents and grandparents live.

“I feel very grateful that I’ve had an incredibly supportive run as dean here, but it was a unique opportunity that aligned sort of the professional with the personal,” Parrish said of his decision to take the Irvine job. “… It is going to be difficult to leave. I’ve got so many friends here and I’m going to miss Bloomington.”

During his time in Indiana, Parrish made a lasting impact on the law school as well as the wider legal profession. He is credited with building on IU Maurer’s success by expanding and creating new programs, launching an ambitious strategic plan, overseeing an accreditation review and completing a $60 million capital campaign.

In addition, he served on the Indiana Supreme Court Study Commission on the Future of the Indiana Bar Examination. The group recommended that the state adopt the Uniform Bar Exam.

Also, in 2020, he joined his Columbia Law School classmate Karen Bravo, dean of Indiana University Robert H. McKinney School of Law, to co-chair the study that concluded IU should remove the Jordan name from its buildings and streets.

“As a member of the search committee who recommended Dean Parrish, it is no surprise that he has embodied the true leadership required to run an elite law school,” Indiana Chief Justice Loretta Rush — a 1983 graduate of the Bloomington law school — said in a statement. “With accessibility to students, engagement with the legal community, and a positive attitude, he has been a steadfast caretaker of IU’s long-term prosperity. I wish him the very best in California.”

Steven Bassett and Aaron Vance, both members of the IU Maurer Class of 2020, highlighted Parrish’s propensity to be among the students as among his strongest legacies. He would sit on the couches in the law school lobby and chat, he would set up in the law library, offering coffee and an invitation to talk, and he often put his work aside whenever a student walked into his office, they said.

His concern for students was heightened when the pandemic shuttered the law school in March 2020, said Bassett, an associate at Goldberg Kohn in Chicago, and Vance, an associate at Dinsmore & Shohl in Indianapolis. Parrish worked to make sure the students still felt connected to IU Maurer and listened to their concerns, including the push for switching grades to pass/fail.

Vance said he tries to emulate the traits he saw in Parrish.

“He was always really cool under pressure,” Vance said. “I don’t know which one made him so calm, cool and collected, staring down a federal judge versus staring down an angry faculty member … but his ability to navigate issues, sometimes really tough issues, is impressive and really admirable.”

Parrish arrived in Bloomington when the legal job market was reeling from the Great Recession. The economic downturn had increased enrollment in law schools, but when the bumper crop of J.D. graduates struggled to find jobs, applications for admission dropped as many were questioning the value of a law degree.

But Parrish said he did not believe the national conversation, which became focused on the worth of legal education, was accurate because lawyers were still doing “incredibly well.” Even so, he said legitimate concerns had been raised about the hefty price of getting a law degree as well as the career support provided to law graduates as they began starting their professional careers.

However, at IU Maurer, he found an institution that treated students as individuals, not numbers, and was working to reduce student debt by bolstering scholarships. He said he was attracted to Bloomington because “the law school was well ahead of a lot of other schools in figuring out how to support students.”

Also, he said he was attracted by the collegiality that was part of the fabric of the law school. The staff and faculty were “all pulling oars in the same direction,” which created an atmosphere that was perpetuated by the students.

“(The students) realize that this isn’t the stereotypical cutthroat law school where you steal the pages from another person’s book … ,” Parrish said. “Everybody says they’re collegial, but there’s a lot of places where your classmate is as much your enemy as your friend. Here that’s not happened. There’s a great sort of esprit de corps and a feeling that students are in it together.”

Alexander Thibodeau, associate at Foster Swift Collins & Smith in Grand Rapids, Michigan, said he choose IU Maurer because of the encouragement and support he felt from his first visit. Indeed, the Michigan native had already accepted an offer and paid his deposit to another law school when Bloomington called.

The 2018 graduate served on the dean’s advisory council as a third-year student. There, he saw Parrish reflect the law school’s supportive nature as the council members brought an array of students concerns that ranged from the temperature in the classrooms to bar passage rates to job placement numbers.

“He did a really good job of making us feel like he was connected to our interests and our needs and cared and was an advocate for us,” Thibodeau said. “My impression is that most students felt really heard by him, as well as felt they he was accessible and someone that they could go to with issues.”

Under Parrish’s leadership, IU Maurer tumbled in the U.S. News & World Report law school rankings from 34th in the 2020 list to 43rd in the 2023 list. However, the American Bar Association data shows the law school continued to enroll academically strong classes and recorded solid employment numbers.

Moreover, IU Maurer’s first-time weighted average bar passage rate rose from 72.9% for the class of 2016 to 80.2% for the class of 2020. Also, an average of 85.9% of the law school’s graduates had either a J.D.-required or J.D. advantage job 10 months after graduation under Parrish.

Ken Turchi, who served as an assistant dean at IU Maurer, remembered Parrish making a first impression as someone with a lot of energy and ideas who wanted to build on the law school’s strengths.

One initiative Parrish launched was the pipeline partnerships with colleges and universities around the country, which fostered an interest in the law among undergraduates, then recruited them to study at IU Maurer.

Within the Bloomington campus, the law school kept building on its collaborations to offer master’s degree programs with the Kelley School of Business and School of Engineering, Informatics and Computing, among others. Also, IU Maurer provided more opportunities to students by expanding the Stewart Fellows Global Internship Program and the summer internships available in the public interest area.

“It was really an infectious enthusiasm that just caught on so quickly,” Turchi said of Parrish. “Then as he started introducing new innovative programs, all of us really saw that it wasn’t about him and making himself look good. It was about making the school look better as there’s such sincerity about everything he did.”

Parrish also connected with and created excitement among the alumni, according to Matthew Furton, president of the IU Maurer Alumni Board and 1995 graduate.

“He would be known as having brought a comprehensive approach to the job,” Furton, partner at Locke Lord in Chicago, said. “He gave attention to every single aspect of this school. Whether it was faculty research or student challenges during the COVID downturn to expansion of scholarships and participating in the competitive game of admissions, he was able to keep all of those balls in the air and have creative plans to advance each one at all times.”•