Getting more Hoosiers to vote is no easy task, but two initiatives announced last November have taken a couple of fundamental steps toward increasing election turnout in Indiana.

The Indiana Civic Education Task Force has been established and will soon begin researching and recommending ways to improve students’ knowledge and understanding of civics. Also, the Indiana Citizen Education Foundation, a nonpartisan nonprofit focused on providing information about state races to voters, has hired veteran journalist Kevin Morgan to lead the development of content for its website, indianacitizen.org.

Both efforts sprang from the 2019 Indiana Civic Health Index, which found Indiana regularly tallied some of the lowest voter turnout in the nation. Although the index also showed Hoosiers are involved in their communities and take part in discussions about social and political issues, the two initiatives see education for students and adults as the way to bolster voter participation.

The Indiana Bar Foundation has taken the lead on creating and serving the civic education task force. Citing studies from Georgetown University, the foundation noted civic education improves political tolerance, the likelihood to vote, and participation in modern democracy and local communities.

“I think there are good things being done in Indiana,” said Charles Dunlap, executive director of the Indiana Bar Foundation, adding he hopes the task force can make people aware of the successes as well as spotlight other programs the state could imitate.

Like many other activities and organizations across Indiana, the two initiatives have been slowed by the coronavirus outbreak. The task force’s first meeting scheduled for March 17 was canceled, and the Indiana Citizen is having a harder time raising funds amid market turbulence.

However, Bill Moreau, who along with his wife Ann founded the Indiana Citizen, does not believe the pandemic is a good reason for Hoosiers to lose even more interest in voting.

“Regarding the turnout in November, the events of the last few weeks would certainly seem to underscore the critical roles elected officials play in our lives,” Moreau said. “Democracy does matter, and we Hoosiers should be mindful that while we are in the midst of a real public health challenge, our civic health is poor, too.”

Already Indiana requires high school students to take courses in history and government, but Dunlap maintained that an understanding of civics is deeper than just being able to name the chief justice of the U.S. Supreme Court or the number of senators and representatives in the Indiana Statehouse. Knowing how federal, state and local governments work together and how the governing bodies relate to the people are examples of the more nuanced knowledge many Hoosiers may have missed.

The newly created civic education task force has the goal of finding ways to bolster that richer understanding of American democracy. Its agenda includes studying programs and instruction methods, as well as enlisting input from various experts from around the country on ways to improve civic education in the state.

Dunlap is hopeful that even with the delay in meeting because of COVID-19, the members will be able to complete their work and still issue a report with recommendations by the November deadline. This would then give policymakers enough time to incorporate some of the ideas into legislation that could be filed during the 2021 General Assembly session.

The composition of the task force underscores the importance of policymakers to this process. Lt. Gov. Suzanne Crouch is chairing the commission. She is joined by Secretary of State Connie Lawson along with Democrats and Republicans from each chamber in the Statehouse. Leaders in the legal community, including Indiana Chief Justice Loretta Rush, educators and a representative from the business community, are also part of the task force. 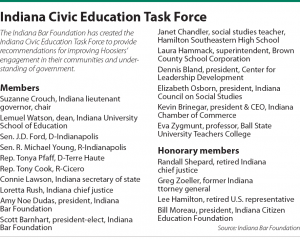 “I’ve been very pleased to see the representation we’ve gotten,” Dunlap said of the task force members. “When we asked, people said yes.”

In a press release, Crouch said she was honored to lead the new task force and is looking forward to partnering with the other members to improve civic education opportunities statewide. “Indiana must put a priority on civic education for Hoosiers of all ages and backgrounds so they can be informed on the issues and engaged in the process,” she said.

As for what Indiana schools might do to enhance civic education, Dunlap said schools around the country are taking different approaches. Some are focused on professional development for teachers while others have instituted student testing under the notion that what is tested will be taught.

One particularly innovative idea that originated in neighboring Illinois is the Democracy Schools Initiative. The program embeds the principles of civic engagement and education across the curriculum and builds relationships with local entities so that students are able to work on service projects in their own communities.

Spearheaded by the Robert R. McCormick Foundation, the initiative addresses the challenge in civic education. Shawn Healy, Democracy Program director at the McCormick Foundation, explained public support for the subject matter is generally strong, but it has been deprioritized as schools have shifted focus and resources to math and reading. Moreover, determining the specifics of what should be taught can spur ideological debates, with progressives believing civic education should be action-oriented and conservatives advocating for a focus on founding documents.

However, in Illinois, the Democracy Schools Initiative is growing because of some flexibility built into the program. Schools wanting to participate have to have a culture of good leadership, learning opportunities for students and connections to the community. Also, teachers have to undergo intensive professional development.

The content of the civic education curriculum, on the other hand, can be adjusted and altered to fit the personality of the school and its community.

Healy said Democracy Schools reflect what could be argued as the purpose of public schools, which is to prep students for democracy. Beyond voting in elections, students learn how to serve their community, as well as how to address issues in a diverse group of people or discuss controversial topics.

The Indiana Citizen envisions its website as becoming a one-stop online resource where Indiana residents can register to vote or check their registration and, according to Moreau, find “complete, unbiased information that they’ll need when choosing between candidates in November.”

To develop the content about the candidates and the issues for the website, the nonprofit is hoping to collaborate with newspapers around the state as well as potentially enlisting help from student interns and volunteers.

Given the amount of information already available about the presidential candidates, the Indiana Citizen is focusing its attention on the 2020 candidates for Congress, Indiana governor and lieutenant governor, attorney general and the Indiana General Assembly. In addition, it will offer information on candidates as far down the ballot as the nonprofit is able to go, Moreau said.

“As our resources and time permit through the summer, we hope to move beyond candidate profiles to focus on some of the issues that will be important to voters this year and how they relate to the decision they’ll be making at the polls,” Moreau said.•