Similar to the keys that jangle on a keyring, virtual keys are necessary to gain access to online treasure.

In particular, the unique private key that is given to each holder of cryptocurrency is essential to unlock the box or vault where the holder keeps his or her Bitcoin, Ethereum, Dogecoin and the like.

The private key, which resembles a password, is issued whenever anyone buys cryptocurrency. Without that string of letters and numbers, the crypto-owner will not be able to access whatever trove of virtual money he or she has. Moreover, there are no virtual tools or services that can retrieve the assets. If the private key is lost, the cryptocurrency is gone.

To avoid losing what can be a significant amount of money, estate planning attorneys urge everyone with cryptocurrencies to include the private key information in their wills and trusts. Not only are the keys vital to accessing the cryptocurrencies, their mere presence also alerts the heirs that the deceased relative or friend was holding the
virtual money.

As Justin Jones, associate at Dentons Bingham Greenebaum in Indianapolis, explained, other assets like bank accounts, stocks and real estate can be discovered by finding the paper statements that arrive in the mail, tracing checks that are direct deposited or searching through public records.

None of that is possible with cryptocurrencies. The virtual wallets where the investors can store their Bitcoins and the exchanges where the alternative money is bought and sold do not typically send any kind of regular correspondence. Unless the will or trust mentions the crypto-assets or, before dying, the decedent tells the survivors, the money will be lost.

The key is the key to cryptocurrencies.

“If you have cryptocurrency now, it’s got to be part of your estate plan just because of the valuable nature of it and just because if you don’t plan for your personal representative to be able to access it, they’re never going to get it,” Jones said. “It’s just going to be a lost asset.”

Although cryptocurrencies sprouted a little more than 10 years ago, Sarah Hughes, university scholar and fellow in commercial law at Indiana University Maurer School of Law, said the structures and mechanisms in place for handling and bequeathing assets after someone dies can be applied to virtual money. Also, the considerations and steps individuals take when thinking about how to distribute personal property and money — documenting who gets what and where the inheritance is located — are the same whether the assets are tangible or exist only in cyberspace.

“This is just a new-age, high-tech version of what you would do if you were a sensible person planning your estate with your lawyer and your accountant and your banker,” Hughes said.

However, a peculiarity of virtual money that creates risks for personal representatives of the estate and trustees is the volatility. The value can fluctuate seemingly on a whim and, unlike stocks, which can also nosedive, Bitcoins and the others have no long-term track record showing they trend upward, increasing in worth over time.

Some trustees are refusing to service a trust because of that valuation rollercoaster, Jones said. They are concerned they will run afoul of Indiana’s Prudent Investor Rule, Indiana Code § 30-4-3.5-2, which requires any investment made by a trustee to be comparable to what a prudent investor would make. Cryptocurrencies are seen by some as too speculative to be considered a prudent investment.

Jason White, estate-planning attorney and investment adviser at Dickmann Reason Bogigian & White in Greenfield, advises that virtual money should be converted to actual dollars as soon as the personal representative or trustees have authority over the estate.

The volatility mandates the quick conversion rather than waiting to see if the value climbs, White said. Even with the cryptocurrencies cashed out, he noted the officials handling the assets could still face ire — and maybe even legal action —from the heirs.

The problem could arise in the case where a decedent has large holdings of cryptocurrencies and makes specific bequests to individuals and organizations. Those receiving the money might not get the full amount promised because the value of the virtual money was too low when it was converted.

“If you lose your own money, nobody cares,” White explained. “If you lose somebody else’s money, that’s a problem.” 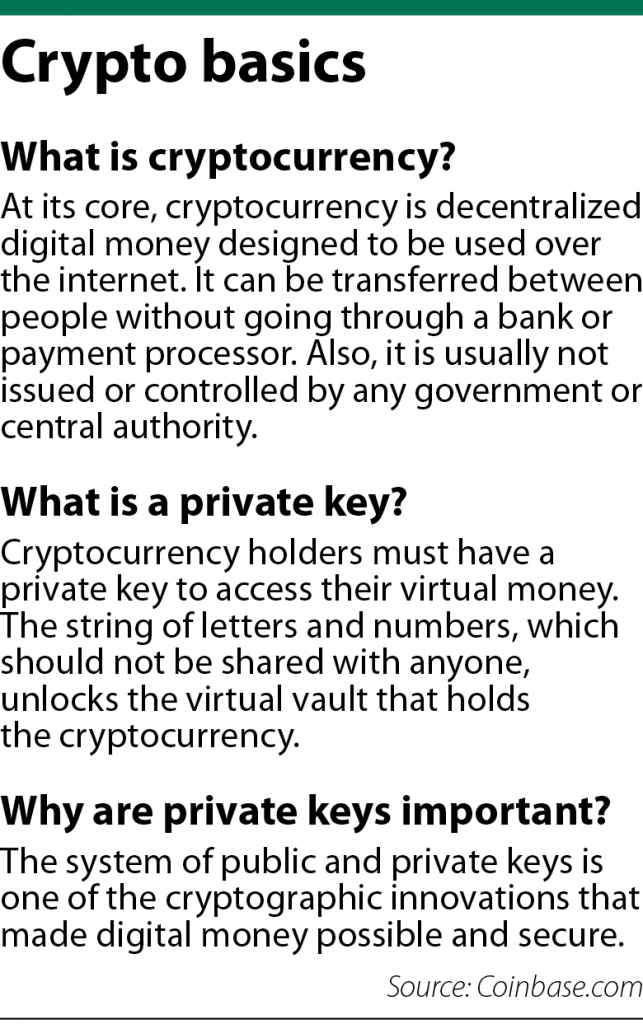 Yet the volatility and distribution of the crypto-assets will be moot if the officials handling the will or trust do not have access to the private key.

Indiana has a digital asset law designed to give access to virtual accounts, but White said it really applies to social media rather than cryptocurrencies and, even then, is not something tech companies appear to be fearful of. When a personal representative has a letter of testamentary or a court issues an order requiring access to the virtual account, often the entities holding these accounts either reject the request or do not respond, he said.

White anticipates the exchanges holding the cryptocurrency accounts will act the same way.

Given that “Wild West” nature of the cryptocurrency world, White said he is confident regulations are coming shortly. The process for dealing with these assets is “too murky,” he said, and at some point, people are going to suffer the consequences.

The Indiana General Assembly did take a step toward installing some guardrails by including language related to cryptocurrencies in an update of the state’s Unclaimed Property Act. Senate Enrolled Act 188, which was passed during the 2021 session, includes a definition of virtual currency.

Republican Sen. Eric Koch, Bloomington, authored the bill and said he believes this is the first piece of Indiana legislation to include cryptocurrencies. But, in a nod to the complexity of access, the Statehouse tasked the Attorney General’s Office with developing rules as to how the unclaimed virtual money can be transferred to the state’s unclaimed property fund.

Koch acknowledged the General Assembly will have to return to the issue of access.

“I think what will have to be worked through is whether authorization would allow a personal representative or other person with authority the key, so to speak, to the actual currency,” the lawmaker said.

Indianapolis intellectual property attorney Paul Overhauser has held Bitcoin since 2013, when he began accepting the alternative money for patent and trademark work he does in foreign countries.

In creating his virtual wallets to store the cryptocurrency, Overhauser said he has been bombarded with messages surrounding the 12 seed words or passphrases that will relate to the private key. Ironically, the messages — and many estate planning attorneys — advise the key should be retained through the low-tech manner of writing it on a piece of paper and then storing that paper someplace safe like a safety deposit box.

Overhauser has done that. The credentials to his five wallets are on paper that has been tucked in a secure location. Even so, he is not fully confident his heirs will be able to get the key to access his cryptocurrencies.

“For me personally, I feel a little bit edgy,” Overhauser said. “I’ve written down this information and put it in a safe place, but I just always wonder after I’m gone if whoever opens up these important papers, are they going to be able to understand what these passphrases are and what they go with?”•