Although the question of what to do with the family car is commonly asked when couples are divorcing, the decision became more fraught in 2021, when the global disruption brought on by the pandemic caused used-car prices to soar to new-car levels.

Kelly Lonnberg, member at Stoll Keenon Ogden’s Evansville office and chair of the firm’s family law practice, described the rise in used car values as one of the “individual weirdnesses” that family lawyers have been encountering in these economically uncertain times.

Unemployment is low and wages remain healthy, but fluctuating values spurred by crimps in the supply chain as well as stumbles in the stock market and housing market are requiring family law practitioners to be creative when helping clients reach a marital dissolution agreement.

“It just seems like the stress of getting divorced is higher in the last three years than it was prior to that,” Lonnberg said. “Nothing’s really calmed down. You would think after the COVID numbers start going down that this would feel like a less stressful job, and somehow it has not.”

The challenges family law attorneys are facing have been induced by the 2022 economic upheaval.

Inflation returned as the consumer price index for urban consumers peaked at 9.1% in June 2022 before falling to 7.1% in December, according to the U.S. Bureau of Labor Statistics. Interest rates continued to climb, with the Federal Reserve boosting the benchmark rate to a range of 4.25% to 4.5% at the end of 2022, the highest level in 15 years. Also, on Wall Street, the benchmark S&P 500 dropped more than 20% from the record high set in January 2022.

As a result, the values of homes and retirement accounts have been falling, creating a headache for family law attorneys trying to affix a worth to what many couples consider their major assets. In addition, the rising interest rates have put a strain on the selling or refinancing of marital homes.

Kathryn Burroughs, partner at Cross Glazier Reed Burroughs in Carmel, said attorneys are having to get creative to help their clients navigate the uncertain terrain.

“No matter what, divorce is an economic hardship, even on wealthy couples. They’re losing half their net marital estate,” Burroughs said. “But it impacts families without means much more greatly. If you don’t have savings and you don’t have many assets and all you have is credit card debt, it is really difficult to find solutions.”

With the supply of new cars stalled, the price of used cars skyrocketed. Consequently, Lonnberg had clients with 2- and 3-year-old cars that were commanding prices higher than what they had paid when the vehicle was new. Thus, the question became whether to use the “jacked up number” on the marital balance sheet, because the value of the vehicle would probably plummet once the supply chains were functioning.

Lonnberg said the answer depends on what the spouse intends to do with the car.

“If they’re going to profit from the increased value then it’s probably legitimate number to include in the marital balance sheet,” she said. “But if … they’re going to keep driving it until the price of it does go back down, then maybe we use the number from before the supply chain kinked up.”

In Kokomo, family law practitioner Sara Pitcher said she has noticed spouses staying put when they are divorcing.

Earlier in 2022, houses were selling before they went on the market or the day the “for sale” sign was put in the front yard. Now, however, moving out is harder because of climbing interest rates, Pitcher said.

Homes are lingering on the market longer, making sales uncertain, while values are falling so quickly that the price quoted may not be valid a few weeks later when the mediation begins.

If one spouse wants to stay in the home, the mortgage will have to be refinanced to remove the ex-spouse’s name. But the higher interest rates are increasing payments, so the staying spouse might not have the ability to cover the new monthly amount. 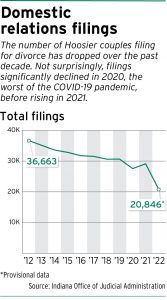 Some couples agree to hold off refinancing for a year in the hopes that the rates will drop, even though the leaving spouse will not be able to purchase another home and may have difficulty renting during that waiting period. Others, as Pitcher noted, decide not to leave at all.

“When things get tight for people, it changes the types of settlements that are available to them,” she said. “So sometimes that means the only financial option for these parties is to continue to live together while the divorce is pending when that wouldn’t have been their preference.”

For pensions and 401(k)s, provisions that account for gains and losses are helping address declining values. Even so, Pitcher said spouses who have seen their retirement accounts shrink by $50,000 since the divorce petition was filed get skittish about dividing the funds.

Lonnberg said a solution might be developed if one spouse is younger or more solvent and would not need to access retirement money as quickly as the other spouse.

“If you have one party who just has better financial stability than the other, then maybe they can take that account that’s down right now and keep all the gains when it recovers,” Lonnberg said. “And then the other party gets the money market fund or the savings account or something that didn’t get hit by the shifts in the market.”

High cost of everything

Burroughs remembers practicing during the Great Recession, when the housing market crash caused banks to teeter, family homes to fall into foreclosure and millions to lose their jobs. While unemployment remains low and the median weekly earnings in the third quarter of 2022 were 6.9% higher than a year ago, according to the BLS, Burroughs said she views the current economic climate as creating more hardship than 2008.

The reason is inflation. Households are feeling the sting of higher prices when they buy groceries, fill up their cars or purchase just about any good or service. 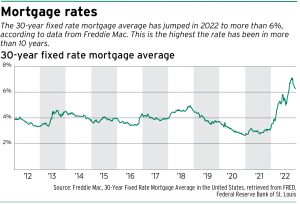 “To me, this economic downturn seems worse,” Burroughs said, noting the Great Recession brought a rapid decline in the stock market, but inflation was not a factor. “It seems like it’s having a more major impact on families who are going through divorce.”

Since 2009, Lonnberg said she more frequently suggests that clients seek advice from financial planners when making decisions about things like investments and marital real estate. She stresses they should avoid the advice of “your buddy next door” and find “someone with some actual knowledge in this area and decide which of these assets you’d like to try to get the most of.”

Economists are not expecting another Great Recession, but their predictions for 2023 hinge on interest rates. Experts at the Indiana Business Research Center see the potential for severe jobs losses in the state if the Fed continues the monetary tightening, which could drop demand for the durable goods made in Hoosier factories.

To prepare, Burroughs is reading more about the economy and making broad plans.

“I’m bracing for anything,” she said. “We have to. We have to stay creative and be ready for whatever comes our way.”•

-The AP contributed to this report.