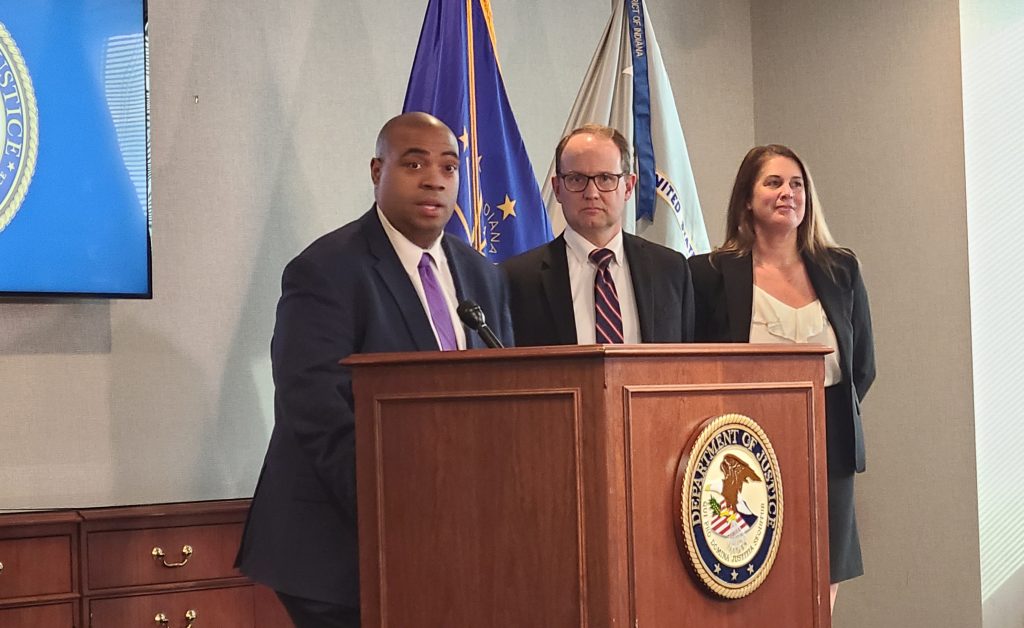 Tony Franklin, 62, was sentenced Tuesday to 12 months and one day, plus two years of supervised release and $279,806.99 in restitution after pleading guilty in July to one count of conspiracy to commit wire fraud.

Franklin had been indicted in July 2019 on multiple fraud and false statement counts related to his business, Franklin Building and Design, which was part of the underlying kickback scheme that put former Muncie Mayor Dennis Tyler in prison.

According to the U.S. Attorney’s Office for the Southern District of Indiana, “between 2014 and 2019, the City of Muncie engaged in a series of public works projects that were intended to benefit the City’s residents.”

Rather than going through the traditional bidding process for the projects, Muncie officials engaged in “bid-rigging” and kickback schemes in which they agreed to steer work to contractors who would “pay to play,” according to the USAO. The officials involved included Tyler, Craig Nichols, who was then the building commissioners; Tracy Barton, who was then the superintendent of sewer maintenance and engineering at the Muncie Sanitary District; and Debra Nicole Grisby, who was the district administrator for the Muncie Sanitary District.

According to the U.S. Attorney’s Office, each of the rigged-bid situations was “greenlit” by Phil Nichols, the former chairman of the Delaware County Democratic Party. Nichols led a scheme called the “Program,” in which contracts were given to kickback-paying contractors.

Franklin admitted in court to paying Phil Nichols and Grigsby kickbacks in exchange for $1.17 million in fraudulently steered contracts. The Muncie Sanitary District also overpaid him by more than $600,000.

All told, the city and the Muncie Sanitary District lost about $1.57 million and the public officials involved awarded $3.23 million in contracts for work that was never done.

“Public officials in the state of Indiana should be executing their duties to benefit the citizens that they serve, not to line their own pockets,” FBI Special Agent in Charge Herbert Stapleton said Tuesday. “It is bad enough when a single public official uses public funds for their own benefit, but this corruption involved multiple officials and private citizens and undermined trust in the city’s stewardship of taxpayer dollars as well as the competitive bidding process.”

Tyler — who was Muncie mayor from 2012-2019 — was indicted for theft of government funds in November 2019. He pleaded guilty in May 2021 and was sentenced to 12 months and one day in prison, plus three years of supervised release and $15,250 in restitution.

According to the U.S. Attorney’s Office, Tyler accepted money in exchange for steering city construction work to a contractor who agreed to participate in the “Program.”

Specifically, in December 2015, Tyler took a $5,000 bribe from Barton, who acted as the middleman between the mayor and a local excavation contractor known as “Person A.” Barton gave the money to Tyler during a meeting in a parking lot, and the contract at issue went to Person A, who “was not the lowest, most qualified, responsive bid.”

For her role, Barton was convicted of one count of conspiracy to commit wire fraud and was sentenced to one year of probation.

Also, earlier in 2015, Tyler received a personal benefit from a different city contractor, according to the USAO. In that case, the contractor performed tree removal work at Tyler’s personal property worth about $1,800, with the expectation that doing so would keep the contractor on a list of eligible bidders for city work.

Finally, Tyler used his position as mayor to try to hide efforts by a contractor to defraud the city, the USAO said.

Specifically, a separate contractor had submitted, and was paid on, invoices for work that had never been performed. Tyler then asked two city employees to say they requested quotes for the contractor, which they never did. The two employees denied his request.

“Of these eight convicted felony defendants, six of them now have been sent to federal prison,” said U.S. Attorney Zachary Myers. “These sentences alone aren’t going to repair the broken trust of the public, but they’re an important step.”

The remaining defendants and their sentences include:

Phil Nichols was charged with conspiracy to commit wire fraud. He had entered a plea deal but died before his case was finalized.

“Investigations like this one are never easy because of the political power influenced and wielded by these defendants,” Stapleton said.

-The Associated Press contributed to this report.