Home » Help renewed for Hoosiers facing loss of their home

Although the housing crisis that spurred the Great Recession has faded, some homeowners are still facing financial distress, and housing counselors worry another wave of mortgage foreclosures could be coming.

The Indiana Supreme Court is working to help troubled homebuyers, and possibly prevent another flood of empty houses, by relaunching the Mortgage Foreclosure Trial Court Assistance Project. A $115,000 grant from the Indiana Bar Foundation will provide funding to pay for facilitators to work with borrowers and lenders to try to get them to reach an agreement that will avert a foreclosure. 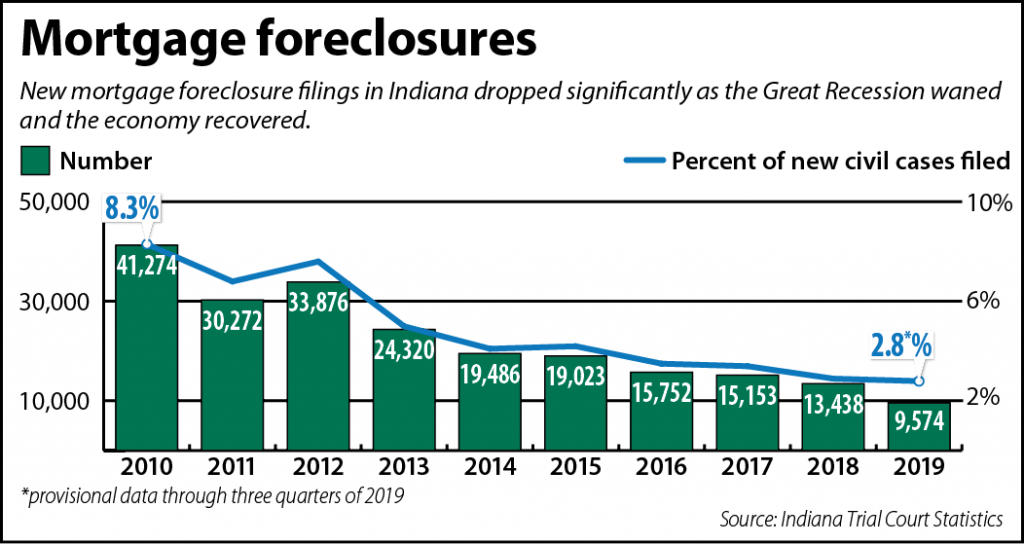 The project was started about 10 years ago, but when funding stopped, the program was shuttered at the end of 2018. Even though mortgage foreclosures have dramatically decreased since the peak of the housing crisis, Indiana trial courts kept calling for the settlement conference initiative to return because they were still seeing Hoosiers struggling to keep their homes.

The restart of the project will again make trained facilitators available, said Mike Commons, staff attorney with the Indiana Office of Court Services. Judges value the trained facilitators because these individuals understand the mortgage foreclosure process and can get at the root of the problem so the parties can reach an agreement that works for all, Commons said.

How much the MFTCAP facilitators will be utilized is uncertain, but the hope is that the relaunch will not only help current troubled homeowners but also prevent any future housing crisis from rising to the Great Recession levels.

According to statistics from the Indiana Supreme Court, mortgage foreclosure filings have been steadily falling since 2010, when 41,274 were filed. Through the first three quarters of 2019, about 9,574 have been filed, but an economic slowdown could reverse the downward trend.

“It’s a great program,” Indiana Bar Foundation executive director Charles Dunlap, said of MFTCAP. “I think it had a lot of success previously. The question now is, ‘What is the demand going to be?’”

The economic recovery that has reduced the number of mortgage foreclosures is also enabling the bar foundation to make the grant to get MFTCAP geared up again. Primarily, the previous hikes in interest rates have increased the flow of funds from Indiana’s Interest on Lawyers’ Trust Accounts and given a bit of a financial cushion to the foundation, which saw its $3 million reserve wiped out by the Great Recession.

Money for the MFTCAP is specifically coming from Indiana’s portion of the Bank of America settlement. The funds, part of the $16.7 billion the financial institution paid the US Department of Justice for financial fraud related to the housing crisis, are limited to only supporting programs that cover mortgage assistance or community development.

With its focus on preventing foreclosures, the MFTCAP, Dunlap pointed out, meets the Bank of America settlement criteria perfectly.

MFTCAP was originally created by a funding stream carved out during the 2009 Indiana General Assembly session. In the slew of mortgage bills that were filed then, Senate Enrolled Act 492 included a provision which tacked a $50 filing fee onto mortgage foreclosure actions. Originally, the additional charge was supposed to end Jan. 1, 2013, but subsequent Legislatures continued to extend the sunset date.

However, the Statehouse allowed the filing fee to expire in 2017. Enough money had been collected that the project was able to continue to pay the facilitators until Dec. 31, 2018, Commons said, but once the money ran out, MFTCAP was shelved.

The funds from the filing fee were funneled to the Indiana Housing & Community Development Authority. Under a memorandum of understanding, the IHCDA then shifted part of that money to the Indiana Supreme Court specifically to establish and support the Mortgage Foreclosure Trial Court Assistance Project.

Simple calculations show that at the peak, the filing fee was bringing in $1 million to $2 million annually. Although only a portion of that would have gone to MFTCAP, Commons said, the bar foundation grant is less than what was being paid out to the project previously. Consequently, all the grant money will go toward paying the facilitators, and any internal cost related to processing the invoices will be covered by the Indiana Supreme Court.

The bar foundation is intending to continue funding the grant that supports the MFTCAP for as long as it can. Also, Dunlap said, the foundation board is planning to do a review next summer and possibly will inject more money into the project if needed.

From the stories Stacy Stuber is hearing, she anticipates more homeowners will need mortgage foreclosure assistance. A HUD-certified housing counselor at Housing Options Provided for the Elderly in Greenwood, Stuber has not seen any uptick in housing problems in Indiana, but in her travels across the country, other housing counselors are sharing tales of more and more families unable to afford their house payments.

Ten years ago, “I could have set up shop in any neighborhoods and just seen client after client,” Stuber said, recalling the impact of the last recession in Indiana. “I hope we are not headed in that direction again. It’s frightening.”

The relaunch of the MFTCAP will incorporate some lessons learned from the previous run. Commons explained that the Supreme Court has been crunching data to see which types of settlement conferences were most successful at getting the foreclosure filing dismissed. Now facilitators will be required to follow what has been shown to be a best practice in order to receive payment for their services.

Stuber has not worked as a facilitator with MFTCAP, but she does see a need for more housing counselors and more help for Hoosier homeowners. She noted a house is a very personal possession, and losing it can be devastating emotionally as well as financially.

“Home is where the heart is,” Stuber said. “A lot of songs are written about home.”•