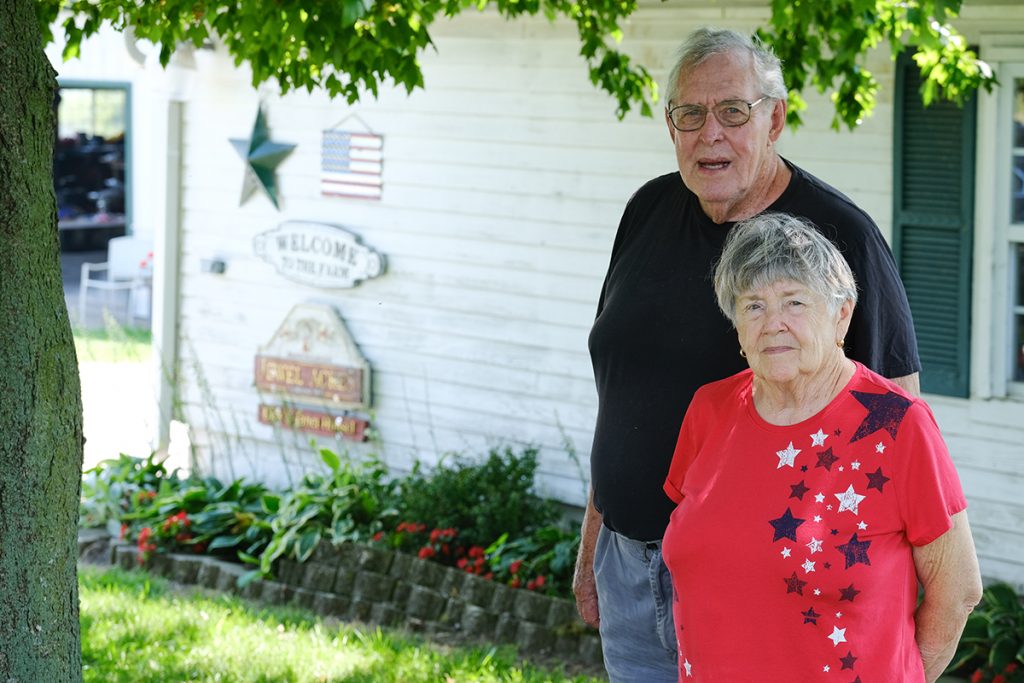 Richard and Janet Himsel say that because of noxious odors from the 8,000-hog farm, they no longer can enjoy family gatherings at their home, which was built by Richard’s father in 1926. (IL file photo)

In dueling motions for summary judgment in the counterclaim lawsuit arising from the allegedly hazardous odors emitted from an 8,000-hog concentrated animal feeding operation in Hendricks County, both sides are sparring over who should have been named as the defendants in the original lawsuit and who has the “frivolous, unreasonable and groundless” lawsuit.

The counterclaim was filed by some of the defendants in Martin Richard Himsel, et al. v. Samuel Himsel, et al., 32D04-1510-PL-150, after the U.S. Supreme Court declined in October 2020 to hear the case. They are seeking reimbursement for “reasonable attorney fees and expenses” related to defending themselves against the lawsuit.

Plaintiffs assert the defendants are pursuing this lawsuit to retaliate and deter the Hoosier Environmental Council from helping residents of rural communities push back against “the powerful livestock industry” and protect themselves from the pollution caused by factory farms.

Hendricks Superior Court 4 heard oral arguments on the counterclaim earlier this month and is expected to issue a ruling in the first part of June.

Martin Richard and Janet Himsel and Robert and Susan Lannon went to court in October 2015 to try to stop the confined animal feeding operation that was located near their homes. In their lawsuit, the Himsels and Lannons claim the “noxious odors” and pollution from the thousands of hogs has impacted their health, limited their ability to enjoy their homes and lowered their property values.

The trial court, after considering the defendants’ motion to correct errors, issued a new order granting summary judgment to the CAFO. On appeal, the Indiana Court of Appeals affirmed the lower court and the Indiana Supreme Court denied transfer, although the justices heard oral arguments before deciding in a 3-2 ruling to let the lower appellate court’s ruling stand.

Next, the Himsels and Lannons unsuccessfully sought relief from the U.S. Supreme Court.

In their counterclaim’s motion for summary judgment, defendants Samuel Himsel, Cory Himsel and Clinton Himsel along with Co-Alliance LLP assert they should never have been included in the litigation. They claim the Hoosier Environmental Council, which was representing the plaintiffs, could have pursued its “interest in having (Indiana’s) Right to Farm Act declared unconstitutional” by only naming 4/9 Livestock LLC as the defendant.

Moreover, they claim HEC pursued the litigation to boost its fundraising efforts.

As a result, the defendants maintain that even though there was a “complete lack of evidence” against them, they had to defend themselves for multiple years in every judicial forum.

“… (T)he filing of (the original) complaint was just the beginning of a frivolous, unreasonable and groundless litigation by the Plaintiffs and their counsel that forced the Individual Defendants and Co-Alliance to needlessly spend several years in litigation defending meritless claims, at a tremendous personal, financial and emotional cost,” the defendants stated in their brief supporting their counterclaim’s motion for summary judgment.

In its response to the defendants’ motion for summary judgment, the environmental group contended the Himsels were included in the lawsuit along with 4/9 Livestock because they decided to build the CAFO before forming 4/9 and because they are the sole members and employees, being responsible for the operation and management. Also, Co-Alliance was named because it owns the hogs and “exerts substantial operational control” over the CAFO.

As far as using the litigation to garner more donations, the HEC asserts the defendants attempted to support their accusation by citing statements made during settlement negotiations. However, the plaintiffs argue Indiana Rule of Evidence 408(a) prohibits the use of such statements to prove or disprove a claim.

“But the most critical take-away from Defendants’ improper and prejudicial disclosure of the Parties’ privileged settlement communications, is that they confirm that Defendants’ ‘Mutual Walk Away Settlement Offer’ was yet another attempt to intimidate Plaintiffs from pursuing their legitimate claims,” the Himsels and Lannons stated in their response.

The defendants say their attorney approached the plaintiffs about a settlement in March 2017, before the trial court ruled. According to the details included in their motion for summary judgment, the plaintiffs and HEC demanded $2.31 million plus $180,000 for attorney fees.

In rejecting the settlement offer, the defendants and their attorney proposed a “simple, straightforward walk away offer.” The plaintiffs did not accept.

As part of a subsequent court filing, the defendants dispute they violated the evidence rule. They assert the references to the letters that passed between their attorney and opposing counsel were not being used to prove or disprove any claims. The discussion of the settlement offers was included in their brief that was filed after the plaintiffs’ “claims had been conclusively decided by four courts … .”

The plaintiffs maintain that when the walk away “threat” did not work, the defendants filed the counterclaim to intimidate.

“… (T)hreatening Plaintiffs and their non-profit counsel with being on the hook for Defendants’ high-dollar attorneys’ fees is of obvious value in attempting to intimidate Plaintiffs into dropping their meritorious litigation — as Defendants sought to do from the outset of this litigation,” the plaintiffs argue. “That a threat is without legitimate legal or factual basis does not make it nonthreatening.”

The defendants are represented by Christopher Braun and Jonathan Emenhiser of Plews Shadley Racher & Braun LLP along with by Kyle Lansberry and Brandon Ehrie of Lewis Wagner LLP and Elizabeth South of Co-Alliance LLP.

The plaintiffs are represented by Kim Ferraro of the Hoosier Environmental Council.•