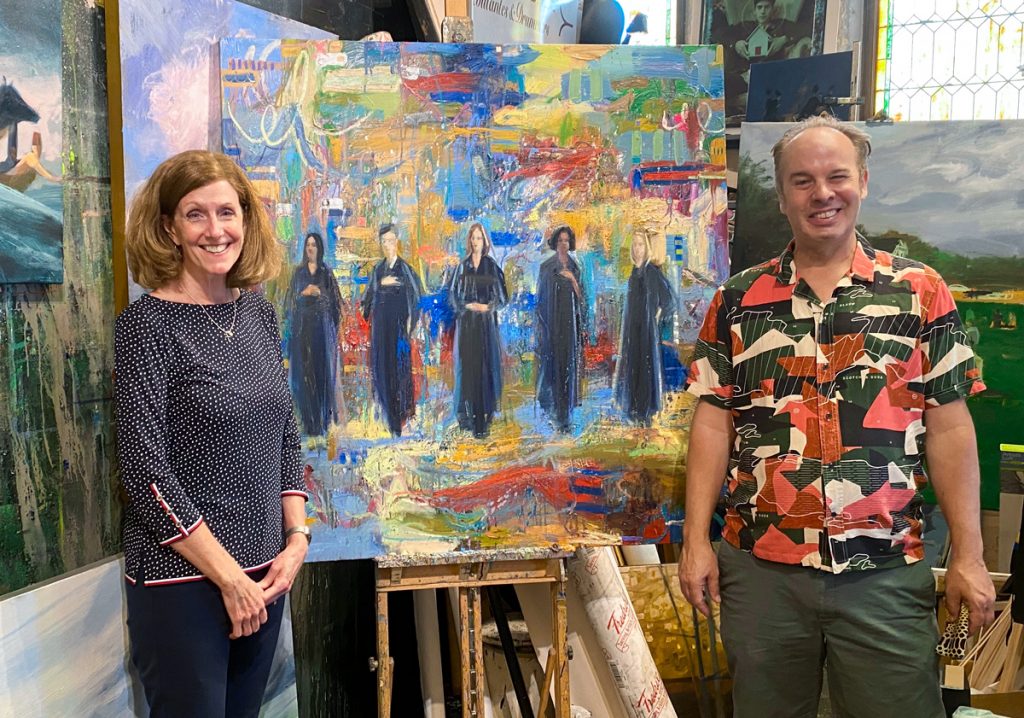 Looking up from her desk, Southern Indiana District Court Chief Judge Jane Magnus-Stinson can have a moment of joy in a year where, as she noted, joyful moments have been too few.

The object of her respite is “Her Honor,” a newly finished painting that depicts her and her female colleagues against a background of colorful bursts and expression to commemorate the achievement of women in the 100 years since the passage of the 19th Amendment. A century after women secured the right to vote, the Southern Indiana District reflects the advances that have been made with five women — Magnus-Stinson, Judge Tanya Walton Pratt and Senior Judge Sarah Evans Barker along with Magistrate Judges Debra McVicker Lynch and Doris Pryor — now among the 13 judges.

“It brings me joy,” Magnus-Stinson said. “I can sit here and be in the middle of the difficulties of this position and look up and feel joy. And I feel joy because women have had the right to vote, women are making progress.”

Indianapolis artist Kyle Ragsdale was commissioned by Magnus-Stinson to create the work. After seeing photos and videos of the chief judge’s courtroom and chambers, Ragsdale wanted to match the regal environment of the federal building, so he adopted a more stately approach. He initially placed the quintet of female jurists in an Indiana field, but when he sent some pictures of the painting in progress to Magnus-Stinson, she overruled.

The chief judge wanted a dynamic and abstract setting. As a result, Magnus-Stinson and Ragsdale explained, the splashes of color and energetic brushstrokes reflect the diversity of the five women. Their differing backgrounds, experiences and perspectives come together in the slashes of pigment running through the work.

Ragsdale described his style as painting in “sort of a strange way.”

He begins with one color to get the forms blocked onto the canvas, then he takes a trowel and, as he explained, breaks the work apart before reconstructing it. The technique allows him to be more expressive as he takes his brush and begins adding colors and shading, he said.

With “Her Honor,” Ragsdale saw he was capturing a moment in Indiana history. He also viewed the work as bringing hope through the strength and resilience of the women judges.

Barker was the first female district judge in Indiana. She was confirmed to the Southern Indiana District Court in 1984 and served for 30 years before taking senior status in 2014. Magnus-Stinson joined the court as a magistrate judge in 2007, filling the vacancy created by the retirement of Magistrate Judge V. Sue Shields, who was appointed as the court’s first female magistrate judge in 1994. Magnus-Stinson was confirmed as a district judge in 2010 when the late Judge Larry McKinney took senior status. Walton Pratt was confirmed in 2010 and is Indiana’s first African American federal judge.

Lynch clerked for Barker from 1986 to 1988 then spent 20 years in private practice before becoming a magistrate judge in 2008. Pryor was appointed as a magistrate judge in 2018, continuing a career in public service that included working in the U.S. Attorney’s Office for the Southern District of Indiana and for the State of Arkansas Public Defender Commission.

Magnus-Stinson said she draws inspiration from the work. District court judges are bound by precedent, but they do have some opportunity to be creative, she said. The painting can trigger her creativity as she, for example, looks for ways to encourage the defendant when preparing for sentencing or to appropriately praise good briefing from attorneys.

“I think you can think of ways to not lose that (creative) side of you and not look at your work as a rote function,” she said. “… (T)hat’s a side of our brain that we can be inspired by sort of the artist-side of life.”

While talking about the 4-foot-by-4-foot painting that now hangs on the wall opposite her desk, Magnus-Stinson wore a mask and twice squirted some hand sanitizer onto her palms then rubbed them together. The almost absent-minded act was both a reminder of the anxiety and danger brought by the ongoing COVID-19 crisis and the seemingly ever-present need for comfort.

Through the painting, Magnus-Stinson was able to give her colleagues a chance to share some happiness. The chief judge successfully kept the art project a secret from her female cohorts even as maintenance personnel hauled the work into the federal courthouse and hoisted it onto the wall. On Sept. 4, she sent an email asking the women judges to come to her chambers because, as she phrased it, she wanted to celebrate them.

The five socially distanced in Magnus-Stinson’s cavernous office and delighted when the sheet was pulled from the painting.

“I think it’s so spectacular and I wanted to surprise them,” Magnus-Stinson said. “I wanted it to be a moment and it really was. … It was a lovely moment in a year of not very many lovely moments.”•