In the still morning hours before darkness lifted, 85-year-old Indianapolis attorney Dan Byron was boarding a bus headed for the airport.

The Dentons Bingham Greenbaum partner was shuttled along with 86 other veterans to the Indianapolis International Airport at 4 a.m., where they settled onto an American Airlines flight dedicated solely to them.

On Sept. 10, Byron had the chance to visit the nation’s war memorials in Washington, D.C., as a guest on the Indy Honor Flight, a nonprofit organization created to honor Indiana’s World War II, Korean War and Vietnam War veterans for their service and sacrifice. 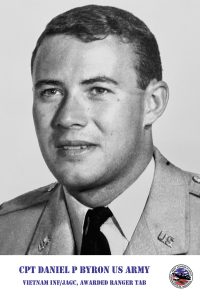 Through the aircraft’s window, Byron watched the sun peek across the horizon as the long day began, with memories now 56 years old flashing across his mind as he flew across the country.

Upon landing in D.C., the men and women were met with celebration and gratitude for their service — a very different reaction than what they had received when they first returned home from the war.

“Protesters were out there protesting the war and threw eggs at us,” Byron, who served in Korea in the 1960s, recalled. “And I thought, well, you know, I’m going back to practice law, I’ve got my degrees. But the rest of these guys gave up on education. A lot of them did. Many of them were drafted. I felt sorry for them.”

In the same year he graduated from Indiana University Maurer School of Law in 1962, Byron enrolled in the United States Army Ranger School, a grueling small unit tactics and leadership course.

By 1964, he had become a judge advocate general and volunteered for the Vietnam War. But Byron was recommended to conduct courts-martial work in Korea instead, where he eventually became chief trial counsel with the Eighth U.S. Army from 1965 to 1966.

Byron handled various general courts-martial cases ranging from allegations of reckless homicide to theft and fraud. As a brand new lawyer, he recalled being handed the cases that no one else wanted to take.

Once, he was assigned to a case involving a rape allegation brought by a general’s secretary. When he ultimately won the case by proving misidentification of the suspect, Byron was swiftly placed into a prosecutor role before rising to the level of chief trial counsel. He traveled all across Korea, taking cases at each of its 10 different military command posts.

“I had tremendous experiences in Korea, which really set the tone for me at the U.S. Attorney’s Office,” he said.

“And as a result of that, I was indoctrinated into the Federal Rules of Evidence, which we used in the service, as well as at the U.S. Attorney’s Office,” he said.

Byron was eventually approached by Indiana Southern District Judge Cale Holder about remaining in the U.S. Attorney’s Office as a first assistant under the new U.S. attorney, but Byron declined. He was ready to move on, he said, which led him to a firm that eventually became what is now Dentons.

A journey worth remembering

Byron and the other veterans on the Indy Honor Flight toured their respective memorials upon arriving in D.C., where they were met at nearly every stop with volunteers and other individuals thanking them for their service.

The longtime attorney and veteran has visited the memorials many times before, but he said that despite the number of visits he may take, the Vietnam War Memorial is a site he always deeply relates to.

“That really choked me up,” he said, “seeing the Vietnam War Memorial again.”

As they walked the grounds, Byron was conscious of a worn piece of paper that lives in his billfold. Penned on the faded paper are names of four young men from Byron’s hometown of North Vernon whom he has never met — but knows all too well. Their names, military ranks and dates of death are on the piece of paper as a reminder.

“I’ve always carried that in my billfold since the first time I was out there at the Vietnam War Memorial, maybe the first or second year after it was built,” Byron said. “I keep it there as a reminder that even in our small town, families were impacted and never saw their loved ones come home.

“I believed in what was going on at that time,” he continued, speaking of the war. “I was kind of invested in thinking that you know, we could save democracy in Vietnam. Actually, later I came to understand better what had transpired and that the South Vietnamese government had corruption in it. But at the time, I felt badly for those families and for the boys that were killed.”

Honored by loved ones

Each veteran brought a guest with them for their journey. Byron invited his youngest son, Craig, to accompany him.

“That was critical,” Byron said. “We really bonded on this trip. It was pretty special.”

As the father and son walked the grounds of Arlington National Cemetery, Byron pointed out the headstones of various decorated service members who had passed. It was an experience that both said they were grateful to share together.

“I already knew this, but the trip was a reminder to me of how lucky I am to have him,” Craig said of his father.

The Indy Honor Flight guests were offered front-row seats to the changing of the guard at Arlington’s Tomb of the Unknown Soldier before heading back to Indiana.

When they arrived home, the veterans were met with an unexpected surprise celebration from family and friends at Plainfield High School: a gymnasium filled with smiling and cheering loved ones who were ready to welcome their soldiers home.