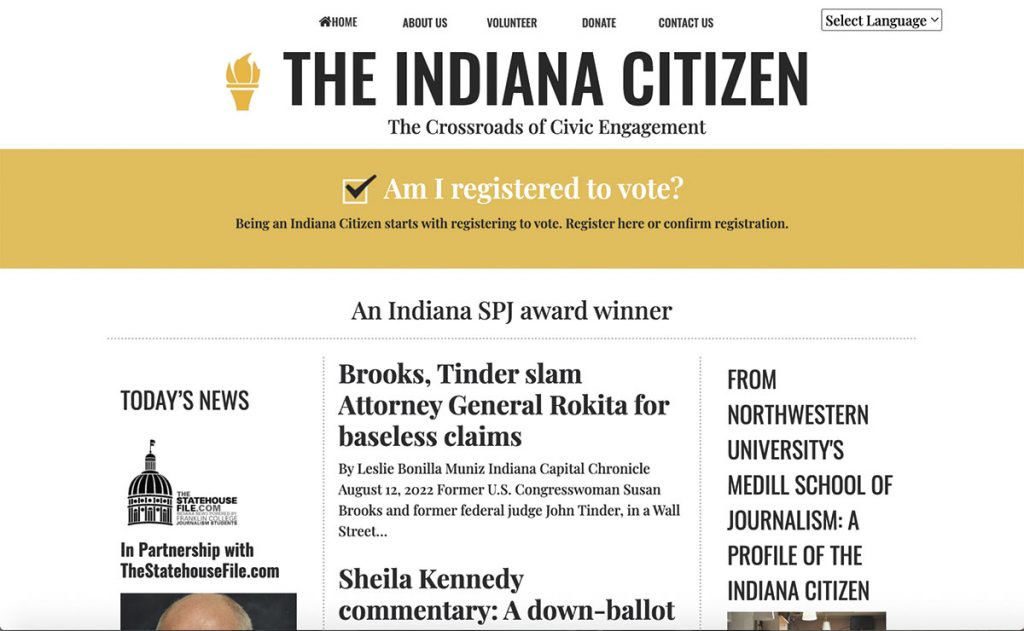 As midterm elections approach, The Indiana Citizen, an initiative focused on voter participation, is shifting its efforts from getting more Hoosiers to the polls to providing information on candidates, issues and registering people to vote.

Bill Moreau, former Barnes & Thornburg partner and co-founder of The Indiana Citizen, said he and his team are working to take away the excuses many use to skip casting a ballot. The reasons for not voting are common — from believing the vote will not count to not knowing anything about the candidates — and are fueling the initiative.

“We’re trying to bust down those excuses,” Moreau said.

The Indiana Citizen exists as a website with a homepage that includes news articles and commentary. Along the side, it has links to its award-winning coverage of redistricting and selected state races. Also, a “Tools of Citizenship” section includes links to voter registration and public records request information.

Moreau conceded the difficulty of raising private dollars to fund the project and letting more Hoosiers know what it offers.

“We’ve got to continue to prove our worth,” Moreau said. “… We are certainly way beyond where we were when we got started, but we still bump into people who haven’t heard of us, and that’s always a sobering thing.”

The launch of The Indiana Citizen initiative coincided with the release of the 2019 Indiana Civic Health Index. As the Indiana Bar Foundation was charged with improving Hoosiers’ civic education, The Indiana Citizen was given the ambitious goal of boosting voter turnout in the state by 20% in the 2020 general election.

Although a record 9.3% more Hoosiers cast a ballot in 2020 than in 2016, the voter participation was dwarfed by the 15% jump nationally. Consequently, Indiana fell in voter turnout from 41st to 46th.

Moreau said his organization had raised and spent $500,000 on a get-out-the-vote campaign targeting 18- and 19-year-olds, but experts estimated that to really improve turnout, The Indiana Citizen needed to invest millions. He blamed the “political class” for blocking efforts to get more people to the polls.

“Those in power are really not excited about investing the amount of time, effort and energy in dramatically increasing the number of new voters,” Moreau asserted. “Those in power really don’t want you to show up to vote without knowing in advance how you’re going to vote. That has been a source of great frustration for us in the work that we’ve been trying to do.”

Helmke said he sees the change in campaigning as reflecting the resistance to higher voter turnout. No longer are candidates trying to convince independents and moderates to vote for them, but instead they engage in negative messaging and attacks to convince supporters of the opposing candidate to stay home on Election Day.

“It’s unhealthy,” Helmke said. “… All you want to do is get your folks riled up enough to vote for you and try to depress the vote on the other side. I think that’s bad for our system.”

The former mayor said he sees the situation exacerbated by the demise of local media. He recalled when he was in elected office, the Fort Wayne news market included multiple newspapers along with television and radio stations. That has since dwindled to one daily newspaper and some of the TV affiliates combining.

“If there’s no local news covering things, then folks don’t really know … who’s good or who’s bad in the local offices or (among) the local candidates,” Helmke said. “And so all they rely on is the party label, and the party label is now defined more from the national politicians than it is by the state or local politicians.”

The Indiana Citizen has always been focused on being a source of information and, for the midterms, is planning to unveil an online voter guide in mid-September. Moreau said the database will have information on every candidate in every Indiana race, including links to the candidates’ social media pages along with their biographies, positions on major issues and campaign finance disclosures.

“I don’t think the voter guide by itself will get more people to show up to vote,” Moreau said. “We just don’t have the resources to go fight the political class, but it can’t stop us from putting this voter guide together. We’re going to raise resources to let users know that this powerful tool is available to them.”

Moreau is devoting space on The Indiana Citizen to covering Indiana Attorney General Todd Rokita. A section labeled “Rokita Watch” contains a articles profiling Rokita’s conduct in office. Moreau almost shrugged and noted he himself is an attorney when explaining the focus on the attorney general.

“I think he’s certainly the officeholder who poses the greatest threat to Hoosiers’ civil liberties,” Moreau said of Rokita. “The guy’s a politician with a law degree. The people of Indiana ought to be able to expect that the office that holds itself out as the state’s chief lawyer to think and act and behave like one.”

Asked for comment, a spokesperson for the Attorney General’s Office said by email, “How embarrassing for the Indiana Lawyer to consider newsworthy the blog of a career democrat crusader who is criticizing an elected official from the other party.”

The Indiana Citizen is also paying attention to the secretary of state race, in particular, because of the office’s duty to oversee the elections in Indiana.

Election security and voter fraud have become persistent topics in national and state campaigns since the 2020 presidential contest. Moreau compared the talk of fraud to “a bloody shirt” being waved to get voters who share those fears to the polls in November.

“Show me examples of voter fraud,” Moreau scoffed. “… The unofficial motto of Indiana is, ‘If it ain’t broke, don’t fix it.’

“Elections in Indiana ain’t broke,” he continued. “And anybody who proposes a fix should prove how it’s broken before they propose a fix.”

Instead, the attorney continues to advocate for structural changes to Indiana’s voting system in order to encourage more people to participate. These changes include same-day voter registration, no-excuse absentee voting and keeping the polls open longer on Election Day.

In addition, Moreau has been trying to start a public conversation as to whether some officials who are currently elected should be appointed. He includes the secretary of state as one that, perhaps, would be better insulated from political pressure by being an appointed position.

He and his team at The Indiana Citizen are planning to press the secretary of state candidates on that issue.

“We’re going to ask the candidates to make a case for partisan election of the office that has the greatest control over how democracy works,” Moreau said.•