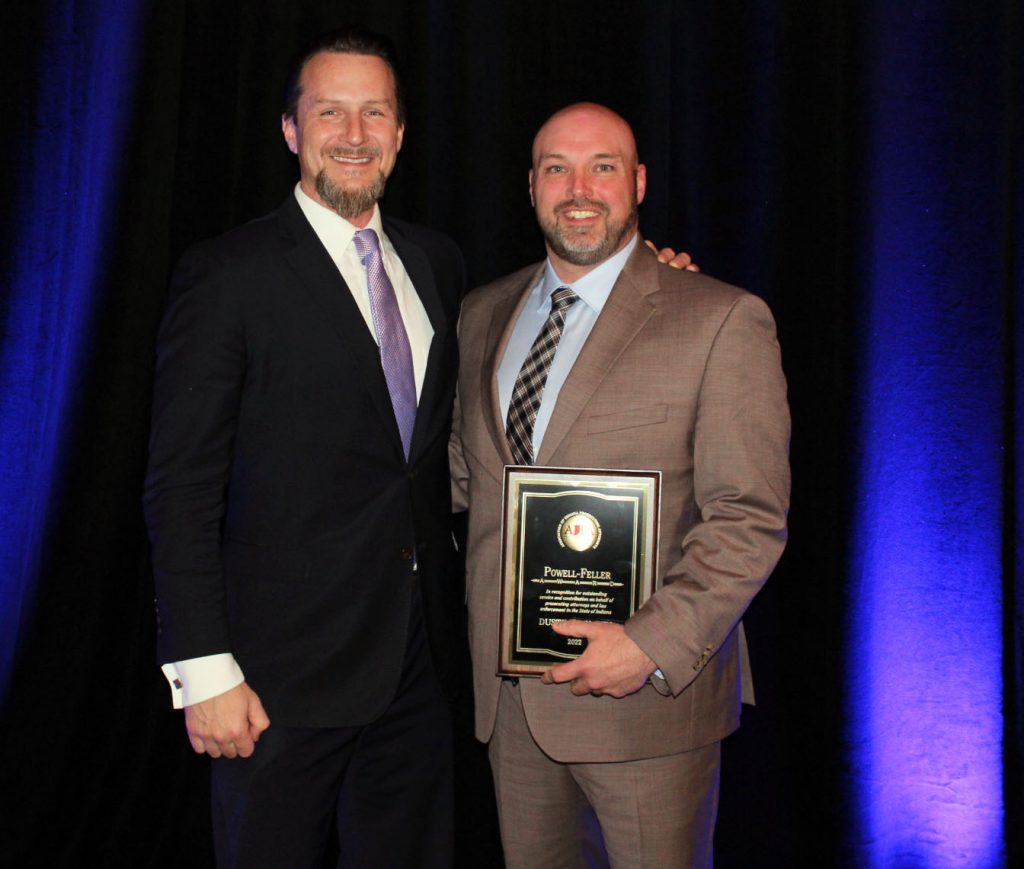 The Indiana Prosecuting Attorneys Council recognized 14 individuals for their longtime careers and accomplishments at its Winter Conference Awards Ceremony this month.

IPAC hosted the conference Dec. 5 on the north side of Indianapolis.

During the ceremony, the Powell–Feller Award — the highest honor handed out by the Association of Indiana Prosecuting Attorneys, Inc. — was given to longtime Washington County Prosecutor Dustin Houchin, who was recently elected judge after serving as prosecutor since 2006.

Houchin has been actively involved with IPAC during his time as prosecutor, serving on the IPAC Board of Directors, chairing the Legislative Committee and working as faculty at several IPAC trainings and conferences.

The second major award, the Stephen J. Johnson Award, which is named after a former IPAC executive director, was presented to two individuals.

First, former Monroe County Deputy Prosecutor David Gohn, who recently retired from prosecution after 32 years, was given the award. Also honored was outgoing Hamilton County Prosecutor Lee Buckingham, who has served in his office since 2011 and was a deputy prosecutor prior to that.

According to IPAC, the four lawmakers were all selected for their work on legislation during the 2022 session that helped rape and human trafficking victims as well as child sexual abuse survivors.

IPAC presented two Law Enforcement Officer of the Year awards at the event, one to Detective Andrew Rushing of the Monroe County Sheriff’s Department and one to officer Tyler McKeon of the Anderson Police Department.

According to IPAC, “Rushing was instrumental in helping investigate a very awful child murder case in Monroe County,” while McKeon “was credited with saving a woman’s life when he arrived on the scene of a car crash this year and applied a life-saving torniquet to her arm, saving her from fatal injuries.”

The second set of law enforcement awards presented at the ceremony were the Law Enforcement Distinguished Service awards, created to celebrate law enforcement officers who have had lengthy careers working with prosecutor’s offices.

Two office administrators, Phyllis Schwegman from the Franklin County Prosecutor’s Office and IPAC staffer Ann Gramling, were both given IPAC’s Kathy Falkner Richey Award for outstanding service as office staff. Gramling, who is retiring after 25 years at IPAC, will also have her name added to the Falkner Richey Award in the future.

Finally, Madison County’s director of victim resources, Betsy Baxter, was honored as the 2022 Victim Advocate of the Year.

“The IPAC awards ceremony is a chance for us to say ‘thank you’ to prosecutors, staff and others who have been allies for prosecutors over the years,” IPAC Executive Director Chris Naylor said in a news release. “All of these winners deserve their moment in the spotlight for all of their hard work.”

More information about the event can be found online.