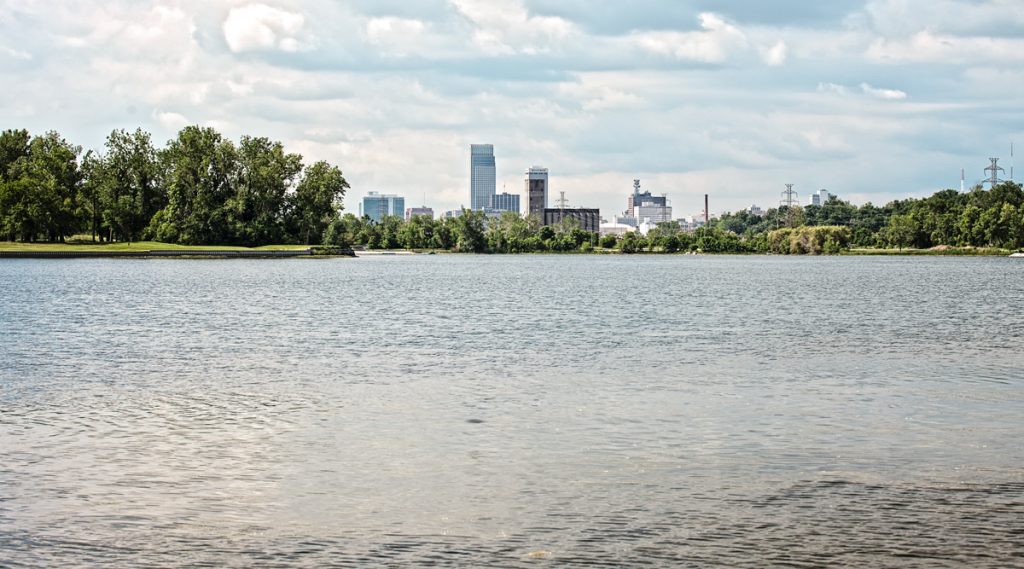 The skyline of Omaha, Nebraska, is seen from Carter Lake, Iowa. The small Missouri River community has been at the center of no less than three significant U.S. Supreme Court decisions. (Shutterstock.com photo)

Few small cities or towns can claim to be the center or the impetus for a U.S. Supreme Court decision. However, Carter Lake, Iowa, with a population that has never eclipsed 4,000 people, can count no less than three.

The Missouri River generally serves as the boundary between Iowa and Nebraska. Nevertheless, nestled near the heart of Omaha is, depending on your perspective, “a feisty little Liechtenstein squeezed between Nebraska and Iowa or a gallstone in Omaha’s gut.” (“What’s the deal with Carter Lake (aka the only Iowa city west of the Missouri River)?” David Harding, Omaha World-Herald, June 29, 2018.) The land where Carter Lake is incorporated was originally connected to the rest of Iowa. Mother Nature had other plans though and the Missouri River altered its course in 1877, severing what is now Carter Lake from the rest of Iowa and attaching it to Nebraska.

Nebraska sued Iowa to determine the correct boundary between the states in Nebraska v. Iowa, 143 U.S. 359 (1892). In an opinion authored by Justice David Brewer, the Supreme Court explored the law of accretion and avulsion at the time. As explained by the Court, where accretion — the natural, gradual alteration of land bordering a river — occurs, the boundary remains the river. Conversely, when avulsion — the rapid, sudden change in course of a channel of water — occurs, the center of the old channel is deemed to be the boundary between the parcels, even though no body of water may be there. The Court determined that though the boundary between the states was not fixed because of natural accretion, the sudden guillotining of (what would become) Carter Lake from Iowa was avulsion, meaning that the center of the original river would remain the boundary and that Carter Lake would remain a part of Iowa.

Unsatisfied with the Court’s handling of a fluid (pun intended) situation, the states attempted to thwart Mother Nature and entered into the Iowa-Nebraska Compact of 1943, which fixed the boundaries between the states on the center of the stabilized channel of the Missouri River, excluding Carter Lake. Under the terms of the compact, each state ceded all lands within the compact boundary of one state to the other and relinquished jurisdiction over that parcel. Titles, mortgages and other legal documents touching on the affected land that were “good in” one state were deemed to be good in the other. For example, ceded lands east of the compact line became part of Iowa, but Iowa was also required to respect title to this “new” land if that title was “good in” Nebraska.

In 1963, Iowa claimed ownership of 30 separate areas of land, water and marsh. When a dispute arose concerning what was needed to prove ownership, the question was submitted to a special master and then appealed to the Supreme Court in Nebraska v. Iowa, 406 U.S. 117 (1972). Writing for the court, Justice William Brennan agreed with the special master’s recommendations that one claiming a Nebraska title to land east of the compact line only needed to show “good title” under Nebraska law and not also prove the location of the original boundary or that the land at issue was on the Nebraska side of that original boundary. Quoting the special master, the court observed that to hold otherwise would be imposing a burden on landowners that “‘the states themselves refused to undertake in 1943’” and which was impossible. The court also addressed questions relating to the application of Iowa common law to these parcels and the effect on lands formed after the compact was executed.

Carter Lake’s fingerprints in our highest court are not limited to riparian battles between states: Its status has sown discord among private litigants as well. In Owen Equipment & Erection Company v. Kroger, 437 U.S. 365 (1978), an Iowa widow brought a diversity tort action against a Nebraska power company, arguing that its negligence caused her husband’s electrocution. The power company filed a third-party complaint against Owen Equipment & Erection Company, a Nebraska corporation based in Carter Lake, arguing that Owen owned and operated the relevant equipment and that its negligence was the proximate cause of the decedent’s electrocution. After the power company moved for summary judgment, the plaintiff obtained leave to file an amended complaint naming Owen as a co-defendant. Thereafter, the trial court granted the power company’s motion, leaving only the plaintiff and Owen in the lawsuit on plaintiff’s amended complaint.

The plaintiff and Owen proceeded to trial, but on the third day it was disclosed that Owen’s principal place of business was in Carter Lake, meaning the parties were not diverse for the purposes of federal jurisdiction. Owen moved to dismiss the case, but the district court denied the motion and the jury returned a verdict in favor of the plaintiff. The judgment was affirmed on appeal. The Supreme Court granted certiorari.

Writing for the majority, Justice Potter Stewart observed there was no dispute that there was no independent basis for jurisdiction over plaintiff’s claims against Owen and noted that while the lower courts had considered if permitting the claim to proceed would be constitutionally permissible, “the jurisdiction of the federal courts is limited not only by the provisions of Art. III …, but also by Acts of Congress.” The Court recognized that the caselaw interpreting 28 U.S.C. § 1332 held it to require complete diversity, and that this case was unique from other “ancillary” jurisdiction matters because the plaintiff had amended her claim to assert it directly against Owen. Accordingly, the Court reversed and remanded the case.

Years later, after the Supreme Court — drawing considerably from the Kroger decision — held in Finley v. United States, 490 U.S. 545 (1989), that a plaintiff pursuing a claim under the Federal Tort Claims Act could not assert against a pendent party a state law claim lacking an independent jurisdictional basis, Congress enacted 28 U.S.C. §1367 and effectively overruled the Supreme Court by permitting district courts to have “supplemental jurisdiction over all other claims that are so related to claims in the action within such original jurisdiction that they form part of the same case or controversy … .”

Despite an otherwise unassuming economic, political or cultural significance, Carter Lake has proven that even sleepy towns and cities can become the locus of momentous change – an important reminder to the Hoosier State, which is filled with many a Carter Lake of its own.•

• Tyler Jones is an associate at Stuart & Branigin, LLP in Lafayette who practices civil defense in federal, state and administrative settings across the Midwest. Opinions expressed are those of the author.