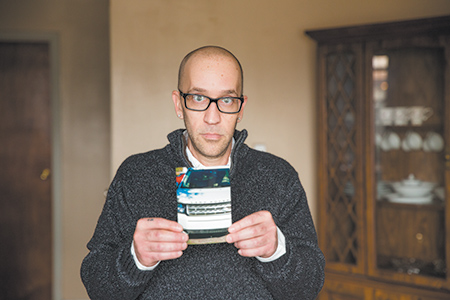 Tyson Timbs of Marion holds a photo of his Land Rover that was seized in a civil forfeiture excessive fines case that ultimately made its way to the US Supreme Court. A Grant County judge Monday ordered Timbs' vehicle returned to him more than seven years after it was seized. (IL file photo)

Editor’s note: This story has been updated with comments from Indiana Attorney General Curtis Hill.

After seven years, two appearances before the Indiana Supreme Court and a trip to the United States Supreme Court, a Marion man fighting for the return of his seized vehicle has won his battle, with a trial court judge ordering the “immediate” return of his SUV. But a pending appeal means the case is not over yet.

Grant Superior Judge Jeffrey D. Todd ordered Monday in State, et al. v. Tyson Timbs, 27D01-1308-MI-92, that Timbs’ Land Rover be released – roughly seven years after the vehicle was first seized by law enforcement. Timbs was arrested and convicted in 2013 for drug and theft felonies, and the state sought the forfeiture of the $41,000 vehicle.

“After taking into account the harshness of the punishment, the severity of the offense and his culpability, the Court finds, by a significant margin, that Timbs has overcome his burden to establish that the harshness of the forfeiture of his 2013 Land Rover is grossly disproportional to the gravity of the underlying dealing offense and his culpability for the Land Rover’s corresponding criminal use,” Todd wrote Monday in his findings of fact, conclusions of law and judgment.

The trial court ruling came after a hearing in February, which was held on remand from the Indiana Supreme Court. The October remand required the trial court to evaluate the proportionality of the forfeiture of the Land Rover using a new test developed by the state justices.

That proportionality test came on remand from the United States Supreme Court, which in February 2019 reversed the Indiana Supreme Court’s original 2017 ruling in Timbs’ case by holding that the Eighth Amendment’s Excessive Fines Clause had been incorporated to the states.

Timbs took his case to SCOTUS in November 2018 after the Indiana Supreme Court ruled in 2017 that the Excessive Fines Clause had not been incorporated to the states. That decision overturned the original rulings of Todd and the Indiana Court of Appeals, which both had determined that forfeiture of the Rover was disproportionate to Timbs’ crimes.

In making the same determination Monday – nearly five years after he first denied the state’s forfeiture petition in 2015 – Todd wrote at length about the importance of having a vehicle in Indiana, a state where public transportation is sparse.

Since his arrest, Timbs has held jobs in Pendleton, Huntington, Gas City and Peru, Todd wrote. He now works in McCordsville, which is about an hour from his Marion home.

“Cars are crucial to maintaining employment in most parts of Indiana and employment is crucial to reducing recidivism,” the judge wrote. “According to a publication on the Indiana Department of Corrections’ (sic) website, unemployment is one of the top two predictors of recidivism in Indiana.

“Automobiles are also vital to offenders like Timbs who are suffering from substance abuse disorders,” Todd continued. “Routinely, these offenders are ordered to participate in drug and alcohol treatment, and a car is usually utilized to attend addiction services and treatment programs located in and around Grant County.”

Timbs’ heroin addiction developed from a hydrocodone prescription he received in 2007. Though he did not purchase the Rover with drug money — he instead used proceeds from his father’s life insurance policy — he did use the vehicle to drive to and from his supplier in Richmond.

He also drove the vehicle to one of two controlled buys set up by an undercover officer in 2013. Likewise, he was driving the Rover to a third would-be controlled by in 2013 when he was pulled over and arrested.

In addition to the seizure of his vehicle, Timbs received one year of home detention, five years of probation and more than $1,200 in fees and costs. He has not had access to his car since its initial seizure, relying instead on his aunt for transportation help.

In evaluating the forfeiture under the Indiana Supreme Court’s proportionality test, Todd looked to three factors: the harshness of the punishment or the degree to which the forfeiture is remedial or punitive; the severity of the underlying offense; and the claimant’s culpability for the property’s criminal use.

The culpability question was the “easiest” factor to evaluate, the judge said, because “Timbs has always acknowledged that the Land Rover belonged to him and he used it to commit the crime of dealing in a controlled substance; therefore, his culpability is at the high end of the spectrum.”

On the issue of harshness, however, Todd noted that Indiana law would only require Timbs to pay $10,000 for his crime, while he paid more than four times that amount to purchase the vehicle. Additionally, the judge said, the Rover was Timbs’ only asset.

“Because employment and treatment are crucial to reintegration into society after committing a criminal offense, the seizure of the Land Rover put the public at risk as it increased the likelihood that Timbs would recidivate,” Todd wrote. “Perhaps of greater import, seizure of the Land Rover runs contrary to one of the touchstones of our penal system — ‘reformation, and not vindictive justice.’ Ind. Const. art. 1, § 18.

“Upon weighing and balancing the factors,” Todd continued, “the Court finds that the seizure of the Land Rover was excessively punitive and unduly harsh.”

Finally, on the severity factor, Todd said Timbs’ crime “was minor” when compared to similar offenses.

He wasn’t a kingpin, the judge said, but instead sold narcotics to feed his addiction. Additionally, the crime was victimless, as Timbs was convicted only of selling to an undercover officer, not another drug offender. Thus, the crime was of “minimal severity.”

“At the time of his arrest Timbs was an unemployed addict with virtually no criminal record who sold a few grams of heroin to law enforcement,” Todd concluded. “Although he was broke, he was ordered to pay fees and costs in excess of $1,200.00. Thereafter, the State sought forfeiture of his only asset; an asset he purchased using life insurance proceeds rather than drug money, and a tool essential to maintaining employment, obtaining treatment, and reducing the likelihood that he would ever again commit another criminal offense.”

Timbs has been represented by the Virginia-based Institute for Justice since 2017.

IJ attorney Sam Gedge celebrated Todd’s decision, saying in statement that “the State’s campaign to take Tyson’s car is just the sort of abusive forfeiture that the Excessive Fines Clause is designed to curtail.”

Wesley Hottot, the IJ senior attorney who argued the case before SCOTUS, added, “The State’s relentless use of its forfeiture machine has been a deeply unjust exercise of power, and it underscores that civil forfeiture is one of the greatest threats to property rights in the nation today.”

Timbs has previously told Indiana Lawyer that he did not intend to become the face of national civil forfeiture reform, but he now sees his case as a platform to help others in similar situations. He reiterated that sentiment Tuesday.

“For years, this case has been important not just for me, but for thousands of people who are caught up in forfeiture lawsuits,” he said in a statement. “To me, the State’s refusal to give back my car has never made sense; if they’re trying to rehabilitate me and help me help myself, why do you want to make things harder by taking away the vehicle I need to meet with my parole officer or go to a drug recovery program or go to work?”

“We are appealing this decision to the Indiana Supreme Court to defend the constitutionality of Indiana’s civil forfeiture laws,” Hill said in a statement to Indiana Lawyer. “We believe the trial court to be misguided in its contention that Timbs’ offenses were ‘victimless.’ To the contrary, we believe that dealing heroin is a very serious offense, and we believe that the devastation caused by the drug crisis across Indiana bears witness to this sad reality.”