But now, get ready for the next booming area of litigation: excessive fees on 401(k) retirement plans.

Across the United States, hundreds of companies, from grocery retailer Kroger Co. to oil giant Shell USA Inc., are facing lawsuits over their 401(k) plans by employees who say their fees are unreasonably high, collectively costing them millions of dollars in lost retirement income. In the past two years alone, more than 170 such lawsuits have been filed.

Eli Lilly and Co. is one of the latest companies to come under the microscope. The Indianapolis-based drugmaker is now defending itself against charges that it mismanaged its $8.2 billion 401(k) plan by paying an outside firm “excessive recordkeeping fees” and that Lilly improperly gave itself a cut of plan assets.

The lawsuit was filed in Indianapolis in the U.S. District Court for the Southern District of Indiana on May 31 by a Lilly senior sales representative in Wisconsin. The suit is seeking class-action status on behalf of more than 25,000 participants in Lilly’s retirement plan.

Record-keepers are outside financial firms that track the balances of individual accounts, provide regular account statements, and offer other information to participants.

“This is a David and Goliath story,” Paul Secunda, an attorney in Brookfield, Wisconsin, who represents the Lilly sales representative, told IBJ. “Employees are just trying to protect more of their money against billion-dollar companies that should be watching the funds more closely.”

A Lilly spokeswoman denied the allegations in the complaint.

“We are proud to offer a strong and competitive employee benefits package that helps us attract and retain top talent and allows our employees to live a better life,” Lilly spokeswoman Molly McCully said. “This includes a robust 401(k) plan designed to support our employees’ financial well-being at all stages of their career.”

As of mid-June, the company had yet to file a response to the lawsuit. Companies have 60 days to respond.

From the outside, the issue of retirement fees might seem low-key and arcane, filled with language of brokerage services, compliance support and record-keeping fees.

Yet the issue has sweeping ramifications. About four in 10 Americans contribute to 401(k) plans, which are set up and sponsored by employers, according to the U.S. Census Bureau. Employees make contributions directly from their paychecks, which may be matched by their employers.

Today, more than 60 million Americans participate in 401(k) plans, according to the Investment Company Institute, a trade association based in Washington, D.C. Altogether, more than 600,000 plans held an estimated $7.3 trillion in assets as of June 30, 2021.

With all that money at stake, a growing number of participants and labor law firms are keeping an eye on the annual fees participants pay to manage and administer the plans, usually through record-keepers.

The fees are often small, $20 or $30 per participant per year. But if the funds are deemed to be excessive compared to similar-size plansos, employees could have a case that they unfairly lost part of their retirement savings, said Tim Deveraux, partner at Wagner Reese LLP in Indianapolis who is not involved in the Lilly case.

“That money could have been growing over the years because of compounding,” he said. “High fees could have a significant impact on returns for individual investors.”

The issue has taken on prominence in recent years, due in part to two U.S. Supreme Court rulings in the past decade in favor of employees.

Under federal law, 401(k) plans must discharge their duties “with the care, skill, prudence and diligence under the circumstances then prevailing that a prudent man acting in a like capacity and familiar with such matters would use in the conduct of an enterprise of a like character.”

In 2015, the Supreme Court sided with participants in a 401(k) plan set up by Edison International, a utility holding company based in suburban Los Angeles. The employees had sued the firm, claiming it violated its fiduciary duty by offering only high-cost retail funds, instead of their lower-cost institutional equivalents. The Supreme Court ruled unanimously that employers have an ongoing duty to monitor such investments, including fees.

And this January, the Supreme Court unanimously ruled that employers must conduct their own independent evaluation to determine which investments may be included in their plan’s menu of options.

In that case, employees of Northwestern University in Chicago accused the university of offering needlessly expensive investment options and paying excessive record-keeping fees.

“If fiduciaries fail to remove an imprudent investment from the plan within a reasonable time, they breach their duty,” Justice Sonia Sotomayor said in the court’s opinion.

Jerry Schlichter, managing partner of Schlichter Bogard & Denton LLP, which brought both cases to the Supreme Court, said the rulings are a victory for millions of employees who contribute to 401(k) plans.

“Employers have a fiduciary duty to make sure fees are reasonable and prudent,” Schlichter told IBJ. “They must monitor them and remove those that are imprudent.”

Today, proposed class-action suits regarding 401(k) plans are pending in more than half of federal district courts in the country, according to 401(k) Specialists, an online news and information site.

Many of the suits argue that the big employers with assets worth hundreds of millions of dollars or more should be using their huge size to negotiate lower record-keeping fees.

“And it’s not just the jumbo plans that are getting sued anymore,” the website said. “Historically, the vast majority of plans being sued had over $1 billion plan assets. Recently, sponsors with much smaller plans are being targeted.”

In response, business groups—including the U.S. Chamber of Commerce, the American Council of Life Insurers, the American Property Casualty Insurance Association and the Business Roundtable—are pushing back.

“The lawsuits typically follow a familiar playbook, often with cookie-cutter complaints,” the chamber said in a brief submitted to the U.S. District Court for the District of Columbia. “Lawyers frequently find a plan sponsor to sue, advertise for current or former employees willing to serve as plaintiffs, and pursue the litigation, often with minimal communication with their clients during the process.”

Some companies have successfully fought back against such lawsuits. Last year, telecommunications giant AT&T defeated a massive class-action, involving more than 245,000 members of its 401(k) plan.

In her order, a federal judge in California wrote that AT&T presented “extensive evidence” that its benefit plan committee acted prudently in monitoring the plan’s record-keeping expenses.

The company had argued that, not only did its benefits committee periodically review disclosures and invoices from its record-keeper, Fidelity Investments, it hired outside experts to evaluate the reasonableness of Fidelity’s compensation and obtained a lower price for record-keeping fees after hiring Deloitte to consult on the negotiations of a new contract, according to a report in Bloomberg Law.

Nevertheless, rather than fight, at least 19 employers since 2020 have signed class settlements with a combined value of more than $68 million.

In November 2021, pharmacy giant Walgreen Co. agreed to pay $13.75 million to settle a case. And big-box chain Costco Wholesale Corp. agreed this March to settle a lawsuit for $5.1 million. In April, financial services company Wells Fargo & Co. agreed to settle for $32.5 million, which stands as a record amount to date. 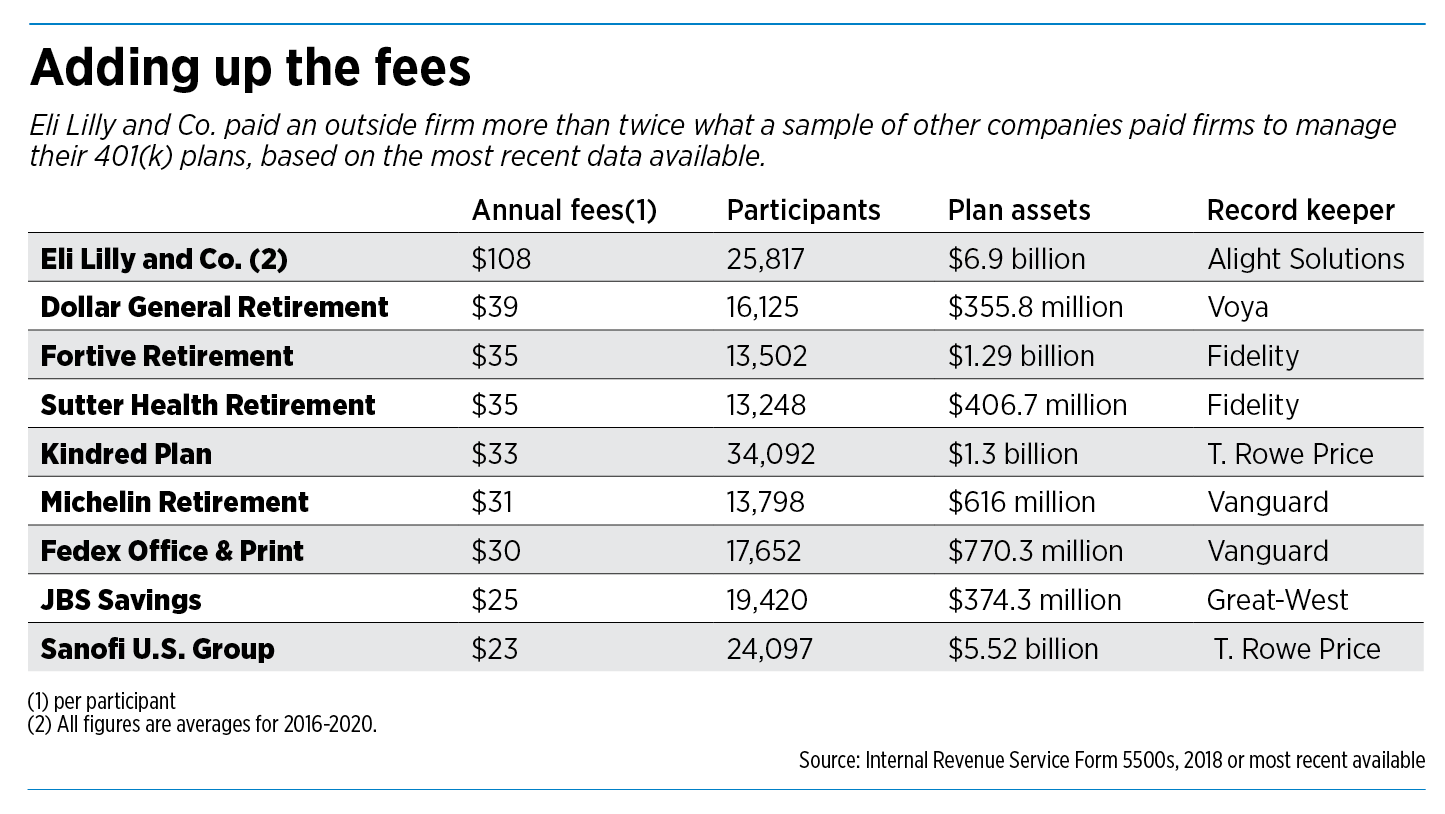 Eli Lilly, however, has given no indication it plans to settle and denied that its fees were excessive or imprudent.

The case against Lilly was brought by Jennifer Probst, a senior sales representative for the huge pharmaceutical company in Wisconsin since 2011.

Lilly’s actions caused the plan’s participants “millions of dollars of harm” in the form of lower retirement account balances, the complaint said.

Other, similar-size 401(k) plans paid much lower record-keeping fees during the same general time frame, the complaint said, drawing information from publicly available Form 5500s, which are annual reports filed with the U.S. Department of Labor with details on a plan’s financial condition and investments.

Lilly’s 401(k) plan should have paid about $30 per participant and should not have agreed “to pay more than three times what they could otherwise pay” if acting prudently, the complaint said.

The suit also accuses Lilly of self-dealing, because it paid itself nearly $1.5 million from 2016 to 2020 for providing “plan administration” services. It said those services were already provided by Alright, the plan’s record-keeper.

Secunda, the Wisconsin lawyer who filed the case, said he initially took an interest after representing Probst in an unrelated matter. In that case, he had examined her pay stubs but then extended the search into her 401(k) plan at Lilly.

“I noticed there were extremely high fees,” said Secunda, whose firm, Walcheske & Luzi LLC, specializes in employment and labor law. “I sent the information to my consultant and we did a full work-up, and that led to this lawsuit.”

He declined to make his client available for an interview. She is still working at Lilly, according to the lawsuit and her LinkedIn page.

Her lawsuit also names Lilly’s board members as defendants, as well as the company’s employee benefits committee. The case was assigned to Judge Jane Magnus-Stinson.•