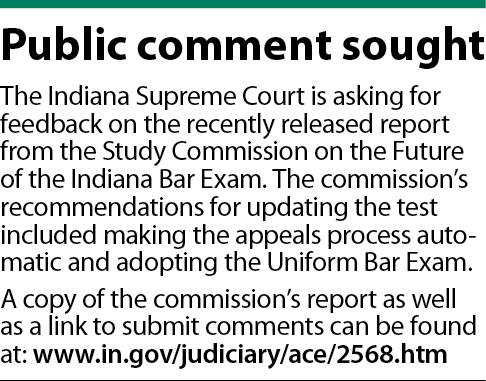 Working at a Fort Wayne law firm before enrolling in law school, Julia Kosnik saw the benefit of being able to help clients across state lines from a partner who was licensed in both Indiana and Michigan.

Dual licensure appeals to Kosnik because she has a connection to Fort Wayne, having attended high school there, as well as strong family ties to Michigan. But as she completes her second year at Indiana University Maurer School of Law, she is having to decide on which side of the state line she will sit for the bar in July 2021.

“It would be so much easier if I could take the (Uniform Bar Exam) and practice in both states,” Kosnik said. “I’m hoping they move in that direction.”

Kosnik is not the only one hoping Indiana jumps on the UBE wave. The Study Commission on the Future of the Indiana Bar Exam heard from many law students, most advocating for the adoption of the national test, according to the commission’s vice chair, Indiana Court of Appeals Judge Nancy Vaidik. Like Kosnik, the students cite the ability to take one bar and be able to practice in 36 different states.

The commission was convinced and has recommended to the Indiana Supreme Court that the Hoosier state adopt the UBE. It was not the only suggestion offered, but after a 12-month evaluation of the Indiana Bar Exam, the commission concluded switching to the national test would reduce the “cognitive overload” placed on examinees by the high number of legal topics they currently have to study, and would give Indiana law school graduates more options in deciding where to take that first job.

During its review of the Indiana Bar Exam, the commission requested input from the more than 18,000 active attorneys in the state. Only 190 replies were returned, which has led Vaidik and retired Indiana Chief Justice Randall Shepard, chair of the commission, to expect little pushback on the report’s recommendations.

“I don’t expect an uproar over this,” Vaidik said.

Lake Superior Judge Calvin Hawkins was a member of the Indiana Board of Law Examiners when the state modified its all-essay exam in 2001 and inserted the Multistate Bar Exam, a 200-question multiple choice test, and the Multistate Performance Test, a section that measures fundamental lawyer skills by having the examinees write a legal memo or brief.

Hawkins was opposed to the change largely because the scoring of the exam would be recalibrated to the MBE. As Hawkins explained, under the MBE influence, “a point is not a point,” and the bar examiners would lose some flexibility they previously had to make adjustments in grading the essay answers.

Nor was he not swayed by the argument that the all-essay exam was too subjective. The practice of law, he said, is subjective. Attorneys and judges have to weigh things subjectively because each case has nuances.

Still, in the years since the adoption of the MBE, Hawkins has not noticed any difference in competency or ability among the attorneys appearing in his courtroom. The bar exam does not gauge how a new lawyer will do in all facets of the law, but, he said, the state does need to ensure the attorneys being admitted have the basic knowledge needed to practice.

The Lake County judge does not see anything wrong with moving to the UBE since it shows Indiana is still testing law school graduates for competency.

“You want that,” Hawkins said. “There needs to be a gatekeeper at the entrance.”

Passing the Indiana bar in July 2019, Andrew Head is uncertain if the exam is measuring ability. He is doing seasonal work at the Amazon Fulfillment Center in Whitestown because his law degree and achievement of passing the bar on the first try have not brought any offers from the J.D.-required and J.D.-advantage jobs for which he has applied.

“So many positions advertised want all this experience that I don’t have,” Head said. “I don’t know what competency is.”

Like Kosnik, Head had to decide where to take the bar exam. He graduated from Michigan State University College of Law but opted to get licensed in Indiana where his family lives. But, again underscoring the portability of the UBE, Head’s desire for a job in law trumps his geographical ties.

“I’d take work almost wherever it is,” he said.

Stephanie McGowan, a senior associate at Frost Brown Todd in Indianapolis, always wanted to practice in her home state of Indiana. But going to law school in 2009 just as the Great Recession was starting to choke the legal profession, she chose to get her law degree at Washington University School of Law in St. Louis, thinking the out-of-state J.D. would differentiate her from the other job applicants.

The roughly two months she spent studying for the Indiana Bar Exam gave her a general background in Indiana’s laws. Having that knowledge not only helped her when she started working as an attorney and handling a range of cases at Harrison & Moberly, LLP, but continues to serve her even as her practice has focused on government services and employment law. Namely, she can spot potential issues on different matters and identify other attorneys who could best provide assistance.

McGowan has given little thought to the bar exam since seeing her name on the list of new admittees in 2012. She, like the other young lawyers she talks to, is too busy trying to navigate life as a practicing lawyer, repaying student loans and finding a work-life balance.

Carrie Devine-Ransom completed her J.D. studies at Indiana University Robert H. McKinney School of Law in December and has already begun the BARBRI prep course for the February bar exam. The mother of two preteens has no plans to practice anywhere other than the Hoosier heartland, but she believes the state should adopt the UBE.

The national test, she said, would benefit many of her classmates who are unsure where they want to practice because they are from another state or because they see more opportunities for their careers in a different part of the country. Also, Devine-Ransom knows life can change, and those who are now so sure of moving might find themselves wanting to come back to Indiana at some point.

As for the exam itself, Devine-Ransom has been preparing throughout her J.D. studies. She took all the courses covering the legal subjects that will appear on the Indiana exam, wanting to be familiar with the information instead of having to learn new things during the bar prep.

“The bar exam is a huge topic in law school from day one,” Devine-Ransom said. “You know that is your final hurdle.”

Christopher Wilkes, a third-year student at IU Maurer, described his support of the UBE as based on the selfish motive of having more flexibility in choosing a job. He earned his bachelor’s degree at Butler University before traveling to Bloomington to study law, and while he “loves Indiana,” he has long wanted to return home to Illinois and practice in Chicago.

Still, if the Hoosier state offered the UBE, like Illinois started doing in 2019, Wilkes said he might be more inclined to take a job in Indiana “at least for a little while.” To Wilkes, who is excited to be on the verge of becoming an attorney, the purpose of his legal studies is the bar exam, regardless of where he takes it.

“What is the point of law school if you don’t pass the bar exam at the end?” Wilkes asked.•