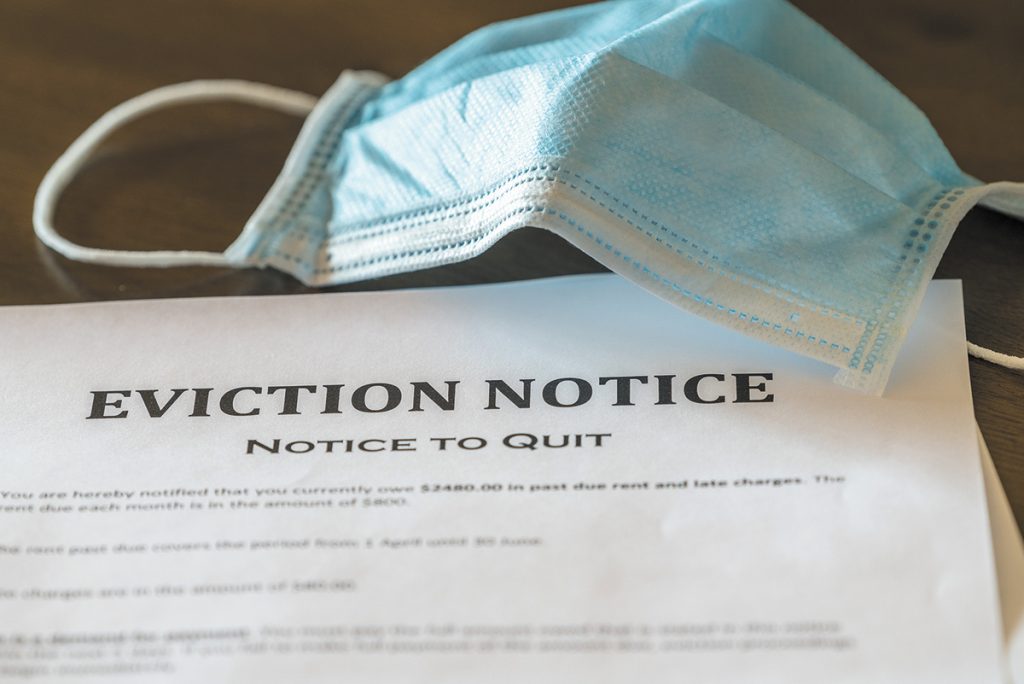 With Indiana’s eviction moratorium set to end Aug. 14, attorneys and judges are trying to help tenants and landlords reach agreements for past-due rent, but one group of landlords has already sued. (Shutterstock.com photo)

As Gov. Eric Holcomb extended the moratorium on evictions and foreclosures until mid-August, Indiana state courts increased their calls for residents and property owners to start trying to work out agreements that will keep families in their homes.

The governor said he was extending the moratorium until Aug. 14 because he wanted to give Hoosiers a couple of weeks to make arrangements to get current with any back rent they owe. Also, he and other state officials encouraged residents to apply for rental assistance grants from the $25 million program funded by the federal coronavirus relief bill.

The extension comes as courts and housing advocates grow more worried about the number of eviction petitions that will be filed once the moratorium is lifted. Although the number of cases that are waiting to be filed is unknown, the demand for rental assistance provides a clue into the depth of the need. According the state, the $25 million program with the Indiana Housing and Community Development Authority has already received more than 20,000 applications.

In anticipation of the coming flood, the Indiana Supreme Court assembled the Landlord Tenant Task Force to make recommendations. The group released its report July 29 and encouraged landlords and tenants to talk to each other, explore options, discuss payment plans and put all agreements in writing.

However, a group of landlords has lost patience and filed a lawsuit in the Southern Indiana District Court against the governor. The three plaintiffs claim Holcomb exceeded his authority and violated the U.S. and Indiana constitutions by prohibiting evictions across the state. They are asking the federal court to permanently enjoin the enforcement of the eviction ban and award damages.

The plaintiffs own rental properties in Indiana and have tenants who are several months behind on rent but continue to live in the homes and apartments. In their complaint, the landlords see their property as having been taken by the government, depriving them of the intended economic use of the rental units even while they are still having to pay the mortgages, property taxes and in some cases the utilities.

Also, they assert the governor’s moratorium has unconstitutionally cut off their ability to seek remedy against the tenants in the courts. The executive order, they argue, not only removed the judicial branch but also prevented the legislative branch from exercising any oversight.

“Not one, but two branches of government have effectively been cut out of the constitutional process,” their complaint states. “An unreviewable order issued without the protection of legislative oversight which remains in effect in all parts of the state for an indefinite period of time is the very definition of what once (was) called ‘tyranny.’”

The case is Jerri LeMond; LaVern and Josephine Miller FLP; and Strong Indiana LLC v. Eric J. Holcomb, Governor of Indiana, in his official capacity; and the State of Indiana, 1:20-cv-1968.

In its report, the task force noted it was charged with taking an even-handed look at the issue. It had to balance the needs of tenants and the rights of landlords as well as identify resources to help tenants stay in their homes and enable landlords to get financial relief.

Delaware County courts are launching a mediation program especially for landlords and tenants. With the help of a $10,000 grant from the Community Foundation of Muncie & Delaware County, the courts are collaborating with PathStone Housing Corporation of Indiana to provide an alternative to evictions.

The small claims court cannot order the parties to mediation. But Delaware Circuit Judge Kimberly Dowling said the court can encourage landlords and tenants to use the program, and the parties themselves can request to participate.

Dowling said the courts would like mediation to take place before the eviction petition is even filed. The hope is that the parties are able to reach an agreement or work out some kind of payment plan.

The judge pointed to research and said if families can stay in their homes, their children will do better in school, the parents will be better able to sustain employment and landlords will have occupants rather than having their properties sit empty.

“I really see this as a win-win for both sides and the community,” she said.

This is the first mediation program for landlords and tenants in the state, and Dowling expects it will become a model for other jurisdictions. Still, the judge noted getting a mediation program up and running by the time the moratorium ends will likely not be possible. The Delaware County initiative took several months and relies on attorneys who are certified mediators who can conduct the sessions either through Zoom or in-person.

Dowling believes just starting the conversation between landlords and tenants will be helpful. “I just think with the pandemic and the times we are in, there is a great need for this program,” she said.•

— Associated Press contributed to this report.