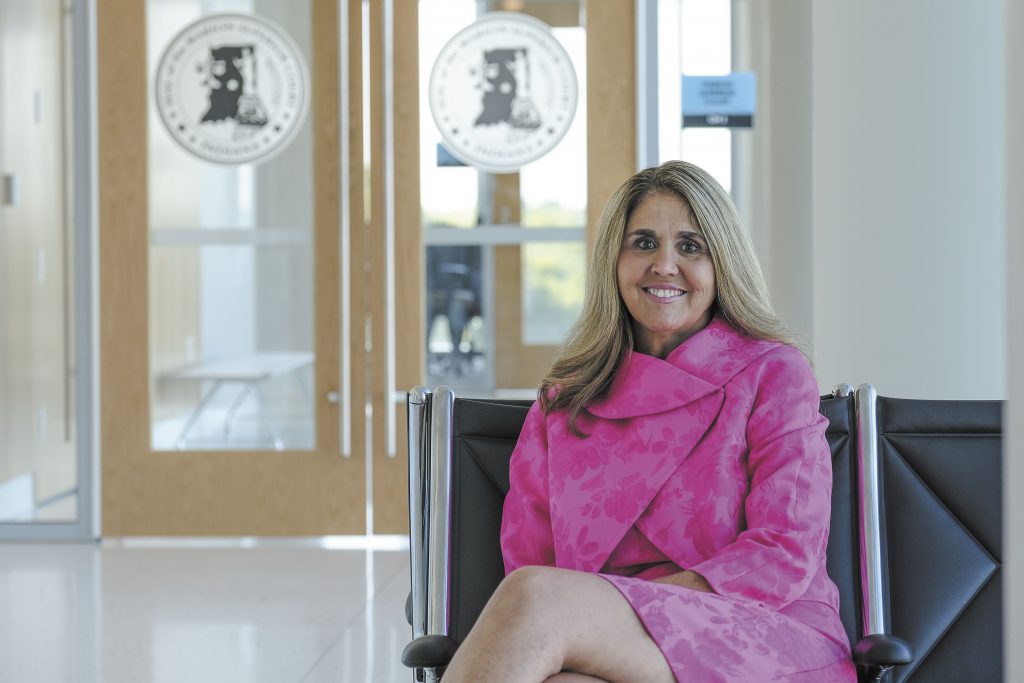 Marion Superior Judge Heather Welch is serving as chair of the NAWJ 2023 conference which will be held in Indianapolis. (IL photo/Eric Learned)

The National Association of Women Judges will be returning to the Hoosier State in October 2023 for its annual convention, which will bring judges from across the country and around the world to Indianapolis and put the spotlight on the Indiana legal community.

Along with showcasing local lawyers, judges and law professors at the educational sessions, the four-day conference will provide the opportunity to highlight some of the landmarks and favorite spots in the Circle City. However, before they arrive, members of the legal profession will have to take care of many of the large and small details involved in hosting the event.

Much of the planning and coordinating is landing on the desk of Marion Superior Judge Heather Welch. She is serving as conference chair for next
year’s gathering.

As the host, Hoosier lawyers, judges and bar associations along with law professors and students will have the opportunity to help build the conference. The to-do list includes developing the programs and enlisting the speakers and panelists; coordinating some of the logistics; planning the opening reception and closing dinner; and tending to countless other matters to ensure each judge has an enjoyable time.

Most important will be organizing the convention so the judges will have opportunities to interact informally. Welch explained that will give the judges the chance to make friends and learn how other courts operate.

“When you have a national association, you can really get a lot of knowledge from judges from across the country,” Welch said. “They can tell you, ‘Hey, this really worked.’ And when you get back home, you can still communicate with them and learn, ‘How do I implement this, who should I contact and who should I get in place to make it happen?’”

The 2023 national conference will mark a return to Indiana for the association. In 2004, Indianapolis hosted the NAWJ conference, with Judge Margret Robb of the Court of Appeals of Indiana serving as conference chair.

“It was great,” Robb recalled. “(We had a) great program and people really liked Indianapolis and Indiana.”

The appellate judge said the conference highlighted the collaboration that Indiana does well. Members from across the state’s legal community came together to do just about everything, from determining the topics of the educational sessions to stuffing the trinkets and maps into the welcoming bags handed out when NAWJ members arrived.

Plus, a happenstance added to the fun. During the conference, a professional football team, in town to play the Indianapolis Colts, was staying at the same hotel. When the players learned the judiciary was just down the hall, they scooped up some team paraphernalia and signed a couple of footballs, then donated the items to the conference’s silent auction.

Founded in 1979, the goal of NAWJ has been to be a “leading voice for women in the judiciary.” The nonprofit works to support and promote women judges and to educate all judges and public about the role of women in a democratic society.

Under its current strategic plan, the association is focused on providing educational programming, growing membership, increasing the recognition of NAWJ and ensuring the organization’s financial health.

Robb joined NAWJ when she was appointed to the appellate bench. Within the association and at the conferences, she found judicial colleagues from around the country who have become friends.

She compared the networking and informal conversations that occur at an NAWJ conference as similar to “meeting somebody by the watercooler.”

The chats and exchanges are opportunities to learn and can help judges do their jobs better, she said.

“Individual sharing is important. It’s how we grow,” Robb said. The NAWJ conference “gives you the opportunity to think of different ways to doing something.”

As for the friends she has in NAWJ, the appellate judge said they are the people she trusts who offer their honest assessments, even if it means disagreeing with her view.

“They give advice that will help you as a person to do a better job,” Robb said.

Welch pointed to the creation of Indiana’s commercial courts as an example of judicial collaboration, as well as the Marion County Courts’ realignment to form a Family Division. She was able to reach out to judges around the country and ask questions.

“Most judges have large dockets if you’re a state trial court judge, it’s just the way it is,” Welch said. “And we don’t have a lot of resources. We have to be good with what we have. But these conferences motivate you to do better and to improve … .”

Reviewing the agenda of the 2022 NAWJ conference being held in a couple weeks in Detroit, Welch pointed out that the topics of the lectures and discussions are also beneficial because they are developed not only from the issues of the day, but also from the issues in the local community. The Motor City conference has developed sessions on the Flint, Michigan, water crisis and how Detroit resolved its bankruptcy crisis.

Welch said she believes the Indiana conference can build some programming around the female leaders in the state’s legal profession. Women in recent years have made history in the Hoosier judiciary with Loretta Rush becoming the first female chief justice in the state and Tanya Walton Pratt becoming the first African American chief judge of the U.S. District Court of the Southern District of Indiana. Also, in 2019, Welch was the presiding judge over the first all-female executive committee of the Marion Superior Courts.

“We’ve had a number of female judicial leaders in Indiana, and I think the (NAWJ attendees) can learn from those leaders,” Welch said.

Aside from helping plan the conference, Indiana attorneys will be welcomed to attend.

Welch noted that especially for law students and young lawyers, the conference will give the Indiana legal community the chance to learn from the educational sessions and to meet and talk to the judges hailing from a variety of locations.

“It’s good for our community. It helps energize people,” Welch said of the long-term benefit of bringing the NAWJ to Indiana. “I hope that people will continue to say, ‘Yes, we have a great legal community here. We have a good court system in Indiana, but we have room for improvement.’”•