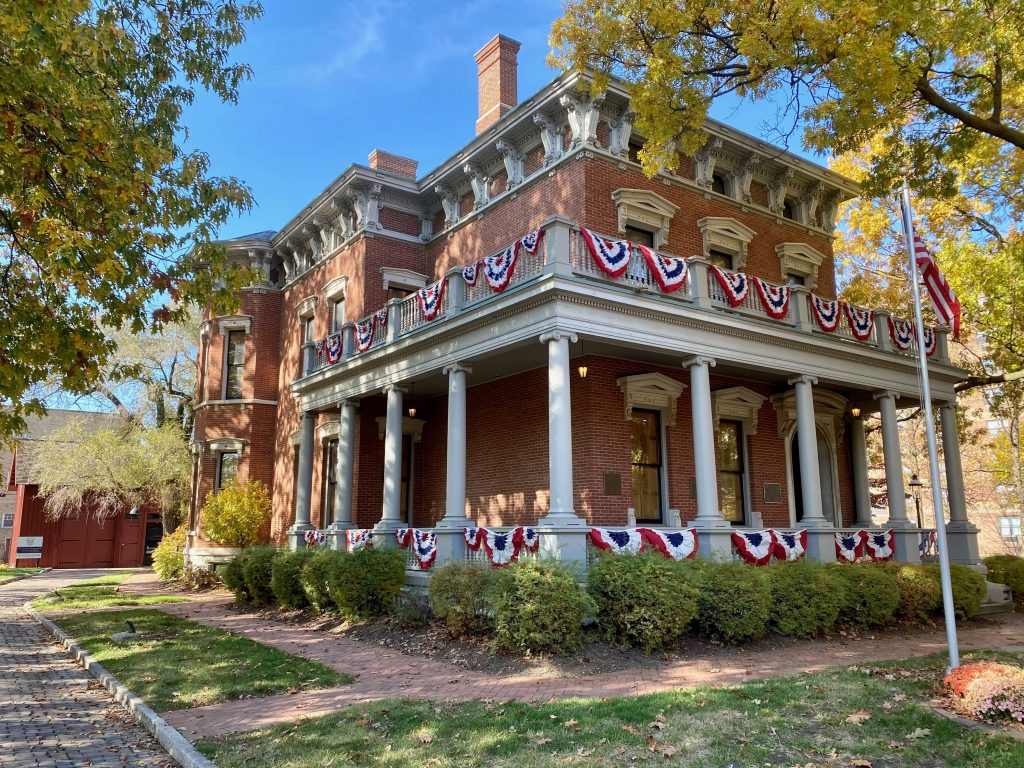 Shortly after Benjamin Harrison received word in June of 1888 that he had been nominated for the presidency, he stepped outside to speak to the crowd of 8,000 people who had converged on his lawn and told them that his home would remain a welcoming place.

“My house will always open its doors gladly to any of you when you may desire to see me,” Harrison said.

Harrison’s home in the Old Northside Neighborhood of Indianapolis is now the Benjamin Harrison Presidential Site, and it will be put into the spotlight as part of a new exhibit. “Residential to Presidential: 150 Years with the Harrisons” will explore the history of the structure as a home, a dormitory for music students and, finally, a memorial to the 23rd president.

The presidential site boasts that 75% to 80% of the artifacts that visitors see when they tour the house are original to Harrison and his family. One of the artifacts that will be part of the exhibit is the guestbook from the late 1930s that was signed by some of the most prominent Hoosiers of the day, including the governor, mayors and judges.

Charles Hyde, president and CEO of the Harrison presidential site, said the exhibit will tell the story of all the “hard work and bright minds” that came together to maintain the historic home at a level that befits an American president. Moreover, the presentation will underscore Harrison’s prophetic remarks that June evening by calling to mind the many other lives that have intersected with the house over the years.

“Harrison was being neighborly,” Hyde said. “Harrison was being egalitarian, probably never expecting that the house that he lived in would one day become a place that would keep its doors open gladly to anyone that might choose to come and see him as president of the United States.”

The exhibit is part of the New Century Curator collabortion, a partnership between the presidential site and IUPUI’s museum studies program.

Opening Jan. 27, the exhibit will continue through Nov. 1. More information can be found at the museum’s website.

The three-story, 16-room Italianate house was designed by architect Herman Brandt and built in 1874. Harrison and his wife, Caroline, purchased the land in 1868, then saved their money until they had enough to build the home they wanted.

Detailed records kept by Harrison during the construction show the house used 380,550 bricks. The total cost for the house, plus the carriage house, brick drive and landscaping, was $24,008.59.

Hyde noted visitors often expect the house to be more primitive than it actually was. The Harrisons were early adopters, converting the home from gas to electricity, installing a telephone, and using water captured from the roof and drawn from a well to have running water inside. Also, when he was campaigning for the presidency, Harrison installed a telegraph machine in his home office.

With its emphasis on quality but not extravagance, Hyde said the house expresses the personality of Harrison and the life he lived.

Harrison and Caroline left the home to move into the White House in 1889. When the former president returned after serving one term, he was a widower.

He remarried in 1896 to Mary Lord Dimmick, and the couple had one daughter, Elizabeth. After Harrison died at his home in 1901, Mary and Elizabeth continued to live there until they moved to New York in 1913.

The Arthur Jordan Foundation purchased the house in 1937, and following a turn as a dormitory for female students at the Jordan Conservatory of Music, it was opened to the public. In 1964, the house was designated as a National Historic Landmark.

Hyde described the exhibit as providing the public the opportunity to see the forest instead of just the trees. Maintaining the house and surrounding land requires being good stewards as well as being very intentional about the continued investments.

“One of the things that the preparations for this exhibit have impressed upon us,” Hyde said, “is how every generation has risen to the challenge of continuing to invest in this National Historic Landmark property and really think about how to continue to serve as a phenomenal national resource for generations to come.”