Hanging in the kitchen of the Paganelli Law office is a painting meant for another space.

That space was Tony Paganelli’s first office — a small area big enough to fit his team, which then included him and a law clerk. Now hanging on a wall in a 12,100 square-foot office, the piece of art commissioned from local artist Megan Jefferson is a reminder of the unexpected growth Paganelli’s firm has experienced.

“No, no, no, no,” he said when asked if he planned for his firm’s expansion. Once a one-man operation, Paganelli Law Group now includes 16 attorneys and seven professional staffers. That growth, unexpected as it was, necessitated a physical expansion, as well. 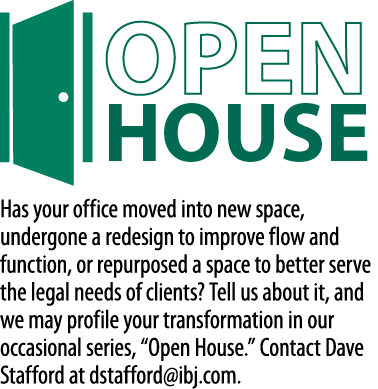 On Jan. 6, Paganelli Law opened the doors of its renovated fourth-floor office. The space is in the shape of a symmetrical V, with the distance between the two “tips” equaling that of a football field.

The two corner offices on the tips of the V feature large windows offering 180-degree views of the horizon. The space was intentionally designed to maximize natural light, Paganelli said, especially in the reception area.

The new kitchen is perhaps the most important part of the renovation. Every Monday the firm gathers for lunch together, and before the renovation, the gathering took place in a conference room meant for about 14 people.

But the kitchen can now seat at least 34, and with some rearranging could seat more. Already the space has played host to two events: a Women in the Law networking event that hosted about 40, and a political fundraiser that hosted about 70.

The hope, Paganelli said, is to start hosting trainings and CLEs in the kitchen, which is equipped with presentation equipment.

The physical space of the office has more than doubled to accommodate the growing staff, which went from nine attorneys in January 2019 to 16 in January 2020. Evidence of the growth is seen even in the carpet, where older sections of the same pattern are more worn than the additions.

Stephanie Grass — Paganelli’s original law clerk who is now an attorney — says the firm’s expansion has enabled her to expand her practice. Paganelli’s practice has also changed, with the majority of his time now devoted to running his business.

That’s not how Paganelli expected his career to go, but he and his team are pleased with how they’ve grown. Even so, he still seems awed by the changes his firm has seen since he hung a shingle in 2013.