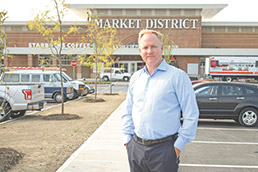 Steve Pittman at The Bridges in Carmel. (IBJ file photo)

A years-long legal battle between members of the Pittman family has been settled, meaning two previously approved mixed-use real estate projects in Carmel and Zionsville can finally move forward with development.

Steve Pittman, a developer in Hamilton and Boone counties, as well as his brothers, Scott and Chad Pittman, reached a global settlement late last year to resolve several legal cases brought by siblings Mark Pittman and Anne Kelton. The five children of late heart surgeon and real estate developer John N. Pittman have fought over his estate since 2015, but an October 2020 settlement now establishes a framework in which Steve, Scott and Chad Pittman will be able to buy out the other sibling’s share of The Farm at Zionsville and The Bridges in Carmel over the next four years.

“With the lawsuits in place, there was no way for us to move forward on any of our development opportunities,” Steve Pittman said. “This settlement gives us the opportunity to do business again.”

Steve Pittman declined to share the total amount owed to Mark Pittman and Anne Kelton, but said the planned five fixed payments are based on the value of those properties.

The town of Zionsville granted Carmel-based Pittman Partners a rezoning of the 62-acre property near Michigan Road and Sycamore Street in 2013 to allow for a $90 million project called The Farm at Zionsville. Redevelopment of the former farmland was scheduled to include 150,000 square feet of retail and office space, as well as 400 multifamily units and high-end estate homes.

Although no development has occurred since then, Steve Pittman got so far in his planning as to announce in 2015 that Fresh Fare by Kroger would anchor the project.

Six years later, Fresh Fare is no longer part of the project, but Steve Pittman believes there will be little deviation in the site’s proposed redevelopment plan by Pittman Investors.

The most significant changes to the project will be in its price and footprint. The Farm at Zionsville is now expected to be a $150 million project on 48 acres, now that a portion of the property and another previously owned by John N. Pittman has been auctioned off.

“We’re still planning on the layouts being very similar to what we anticipated back then, with our road configurations and number of residential units,” Steve Pittman said. “We’re getting a lot of indication at The Farm at Zionsville that there’s good, high-end retailers that want to be on that property.”

The Farm at Zionsville and The Bridges in Carmel on 116th Street, between Spring Mill Road and Illinois Street, are both slated to begin development in 2022.

The Bridges in Carmel on 116th Street, between Spring Mill Road and Illinois, already includes the Market District grocery store and other retail operations, which the family sold off in 2017.

What remains is a 22-acre portion of the property just south of the grocery store that’s gone undeveloped since the project was approved in 2011. Steve Pittman said that portion of the site calls for up to 300 multifamily units, offices and hospitality uses. The initial focus for that project will be on the western, residential half, before Pittman turns his attention to those other uses along Illinois Street.

“We’re pretty far along in discussions with a multifamily partner that will be looking to take 12 to 13 acres,” he said.

Steve Pittman said the project’s value has doubled since it was first proposed and the area has only improved with the development of Zotec and KAR Global’s headquarters, as well as the nearby Franciscan Health Orthopedic Center of Excellence.

Though he anticipates working on the first phase of both projects in 2022, Steve Pittman said there’s still some flexibility in those timelines.

Mark Pittman said the mortgage he and his sister now have on the properties doesn’t worry him, and he’s confident they’ll be developed as planned and the family will stay out of court.

“It’s unfortunate the way it went down, but my sense is it’s completely over,” he said. “We’re done.”