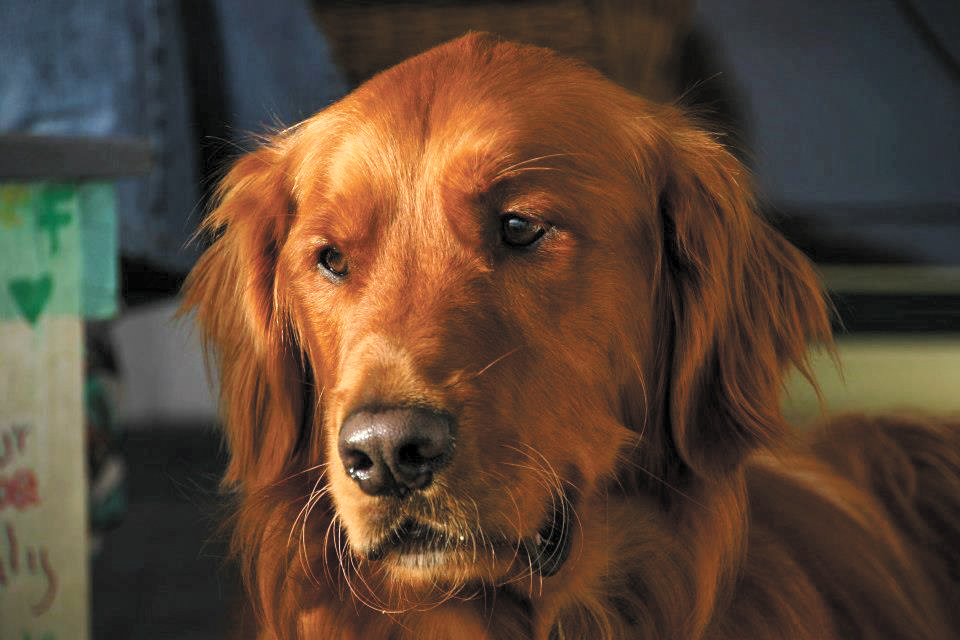 Gus became a regular at Indiana State Bar Association meetings and events, as well at Indiana law schools, where he provided a few moments of calm amid the stress of exam weeks. (Photo courtesy of Terry Harrell )

The legal profession recently lost a bit of joy, comfort and unconditional love. Gus, the 10-year-old golden retriever and JLAP therapy dog who was a regular sight at state and local bar association events, died July 3.

Fittingly born on Valentine’s Day 2010, Gus was a rambunctious 14-month-old when he was rescued by JLAP Executive Director Terry Harrell and her husband, Stan Rorick, through GRRACE, a nonprofit golden retriever rescue organization in Indiana. Terry and Stan gave Gus a loving home with regular exercise, treats and belly rubs, plus summer trips to Mackinac Island, where he loved playing in Lake Huron.

Gus was certified as a therapy dog in 2014 by Therapy Dogs International (TDI). Thereafter, he became a regular at Indiana State Bar Association meetings and events, as well at the law schools in Indianapolis and Bloomington. Lawyers dashing between sessions at the ISBA Annual Meeting or Solo and Small Firm Conference would find a brief respite by stopping for a moment to give Gus a scratch behind his ears or to pet his glistening coat. At the state’s law schools, Gus provided a few moments of calm amid the stress of exam weeks.

But perhaps Gus’ greatest contribution was that his presence became an entryway for lawyers and law students alike to make a connection with JLAP and its programs. Among those stopping by to pet or scratch, some would take time to talk with Terry or one of the other JLAP counselors or volunteers about issues they were facing. Gus and Kirby, the other original JLAP therapy dog who passed away earlier this year, were instrumental in connecting JLAP to lawyers and law students dealing with depression, stress, grief, anxiety or substance use issues. Without Gus and Kirby, many of those who have been helped by JLAP would not have found their way to make a needed connection. Gus and Kirby saved careers and lives.

Gus was perhaps the first dog in the nation to take part in a CLE panel, participating in a program on managing stress at the 2016 Indiana Solo and Small Firm Conference.

Gus was also an author. His article, “The world according to Gus,” appeared in Res Gestae in early 2016, offering life advice to lawyers. He had assistance writing the article, but the ideas were all his.

4. Wag your tail when you work.

5. Deal with what is in front of you.

6. Include time in your day for play.

7. Reward yourself with small treats.

8. Approach everyone with the presumption that they are good.

And finally, bathe occasionally, but not too often. It takes the shine off your coat.

Gus is survived by his owners, Terry and Stan, the entire JLAP staff and hundreds of those in the legal community whose lives were touched by him.

While Gus is gone, his mission continues. Other JLAP therapy animals continue to attend bar association events. JLAP continues to provide confidential services to judges, lawyers and law students facing issues of depression, grief, anxiety, stress or substance use disorders. All communication with JLAP, whether about yourself or others in need of help, remains confidential. JLAP can be contacted anytime at (317) 833-0370.•

• Stephen Terrell recently retired after 40 years of practicing law. He is now concentrating on writing and traveling on his motorcycle. He has written three novels, including his most recent, “Last Train to Stratton.” Opinions expressed are those of the author.